Big changes ahead, and a sneak peek...

Issue 16 of Elefantz HOME was emailed out to all it's subscribers yesterday.
I had some news to share and as it is about the magazine I wanted to give the magazine readers 24 hours to read about it first before sharing here on my blog.
So what's it all about?
Well, I'm worn out.
Pretty much that is the gist of it, but here are a few excerpts from my opening letter in Issue 16 to explain my heart...
____________________________

… at the beginning of the year I wrote in my opening letter to you about a desire to not allow ‘Elefantz’ to dominate my day to day life and relationships…good intentions, wonderful actually, but as hard as I tried I could not find a healthy balance between my work and my ‘real’ life. In contrast to my desire, I increasingly became enslaved to my magazine and its monthly deadline. Wearing the hats of wife, mother, friend, designer, and independent publisher became more often than I liked a weighty burden instead of a joyful experience.
You see, I love this magazine – it was an experiment to see if I could combine my two creative loves; writing and sewing…To bring you an issue that I am proud of and excited to have you read is a delight each and every month.
But, as each issue moved in to the next, and the months became a year, less and less of me was available to anyone other than my husband…The designs, the actual stitching and machining, the pattern writing, the photography, the promotions to build the readership…it is ceaseless. And the worst thing is that every day melds into another until I cannot recognise Thursday from Monday, and my email inbox groans with the weight of too many neglected friends as my time is spent on answering Elefantz business emails instead.
The life of an independent publisher is not entirely what I imagined, and to love what you do, but also to despise it’s infringement on your family life and other relationships, is bittersweet indeed. I was caught unawares because I was so enthusiastic and looked only ahead and not to either side.
After much prayer and discussion with my husband I have decided that the season has changed for Elefantz HOME in its current format, and it is time to gather the harvest, and rest for a while to enjoy the fruit.
The magazine as it is now will continue for two more issues, and that will be 18 issues in total as a monthly magazine....
So, what comes next, you ask?
A long held dream to write books – but now they’ll also include stitcheries. My first book is already in my head, and ideas scattered on notepaper throughout the house.....
And the magazine?
A new format – seasonal, actually.
In 2013 Elefantz HOME will be published just four times a year – March, June, September, and December. One issue every three months seems do-able, allowing me the luxury of ‘taking my time’....but I will share more about that in January.
_________________________

So there you are! Changes for the better - my better.
If you'd like to read the full letter and more about what is ahead, or you'd like to purchase this month's issue which is packed with seven gorgeous designs... 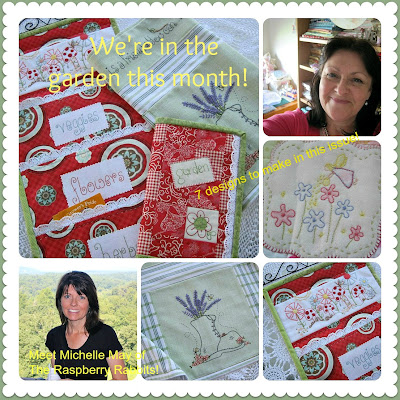 ...you can do so from the Back Issue purchase page HERE.
Issue 16 will only be available as a single purchase for four weeks, so hurry if you want a copy.

*****
A new venture for Elefantz is paper patterns!
I'm working on a brand new one right now. It's very sweet... 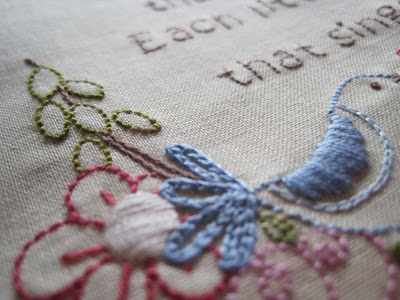 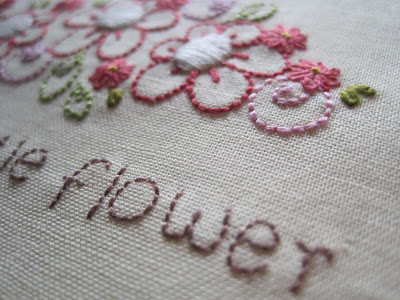 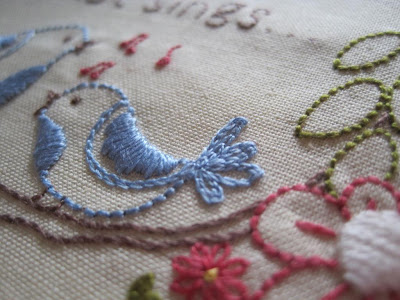 The main block is stitched, and now to trace out and embroider the borders... 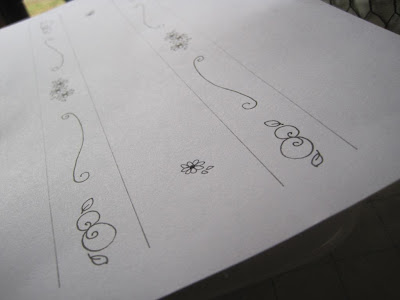 Lastly there will be simple patchwork piecing.
I think you'll love it!

*****
It is officially just 20 days until our eldest daughter Kezzie's wedding!
Her dress theme is rock-a-billy, and she emailed me a photo of 4yo grandson Deegan testing out his page boy outfit.... 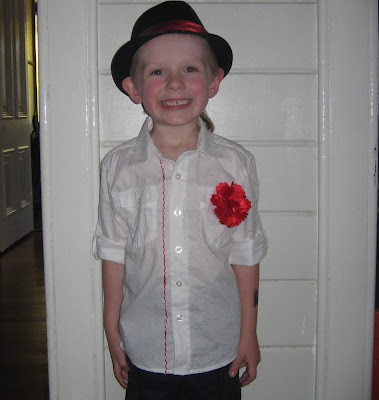 Is that not the cutest little guy you've ever seen?!
We're all wearing red, black and white, and I get to walk both my grandson's down the aisle.
I'm quite chuffed.

Good for you Jenny! It takes courage to know when to say when, and then to actually make the changes needed to get our lives back on the right track. I salute you for that courage! I've actually often wondered how you manage to publish a magazine full of so much every single month. I know I'd never get anything else done, ever. Not to mention, I'd probably never get the magazine done in just a month either :*)

As much as I look forward to receiving your monthly magazine, I can only imagine how much work is involved so hopefully quarterly will be better for you. Take care of yourself and your family first and the rest will follow. Hugs.....

Quarterly sounds Great Jenny and will give you the time you need..Good Luck with your Paper Patterns and
Looking forward to your First Book.
Take Care
xx

That is quite understandable Jenny. I was just telling one of my friends this week that I don't understand how one person can self publish such a massive, fun filled magazine each month. Quarterly will increase the anticipation. Good luck with your new ventures & loving the sneak peak. Tracee xx

Your little guy is quite handsome! I am excited for you with your daughter's wedding coming so soon. You are so sweet and glad you made the right choice for you!!

Jenny you have done wonderfully well to publish such an extensive mag each month for as long as you have. Your readers & subscribers have been spoiled, I'm sure they would agree with me. Family time & 'self time' is so very important, so I wish you much enjoyment in it, now that you will have more time for it... x

Jenny - I so understand! I tried to semi-retire from my shop this summer - big joke. All I wanted was three afternoons out of a six day a week job - got three afternoons alright - all of them in the first week!
So now I am, like you, trying to get back to the 'joy parts' and rid myself of the 'oh boy' parts. Wish is was easy - wish you luck as you work thru it!
God Bless.

and the grandson is adorable!!!

Hi Jenny,
Phewww! Okay, your first couple sentences scared me and in my brain, a note to encourage you to maybe publish a couple times a year. So, I am happy to read along and discover that is exactly what you will do. Hooray! It sounds like the best of both worlds and as always I look forward to reading your publications.

Congratulations on your daughter's upcoming nuptials. Your grandson is a real cutie. Those colors will be grand. What color will the bride wear? You know I look forward to seeing wedding pictures! Awesome!

Thanks Jenny - God bless you.
hugz

Hi Jenny - thank you for sharing what has been going on for you and the family. I am glad that you have been able to make a positive plan for your work life that will enable you to have balance in your family and wider life. The book sounds exciting and I think the seasonal magazines will be brilliant - to be honest I cancelled my subscription due to monetary reasons but also I was not able to stitch all the wonderful things you have for us each month. I am really interested in a quarerly magazine and would be interested in supporting you once again and enjoying all the wonderful designs you have. Have a restful time amongst all the business of life. I hope that the wedding is amazing. GB C x

I'll say it again, you're a wise woman, dear Jenny. Love the look of your new design! And hoping you'll still have pdf patterns available....

I love your newsletter and have enjoyed all your writings. However, your family and homelife is more important. God will honor your decision. It is a good one. :)

I always did wonder how you cranked out so much stitching when it takes me a month of Sundays to do one project!

Looking forward to hearing all about he wedding! Your grandson is very handsome!

Sounds like a wonderful choice for you. God and Family first!

Good for you. You can't take care of your family (and friends) if you don't have time to take care of you first. You had fun trying something new, and will now try something else new without out burning out doing it. Enjoy the ride. Have fun at the wedding!

Jenny, your family and general well being are always foremost in importance. I have enjoyed your monthly magazine and look forward to following your future endeavours. It must be so exciting for your all with the upcoming big day.

Thank you for sharing your heart and your art with all of us. Glad you know your limits. Have a blessed day!

I am trying to do the same - more time to work in better projects, more time to learn the things I like... more time to enjoy life, family, work...
I will miss the montly "talk" with you, but I am sure that great things are coming!
Have a very nice October!

Good for you and Bless you for all you have already so freely shared. I wish you nothing but the very best with your new pattern company. In fact, can't wait to see the designs.
Congrats on the upcoming wedding. Your grandson is adorable!

I have loved every issue of your wonderful magazine and will continue to enjoy your quarterly magazine. This is a good decision for you, your family and your friends. Have a wonderful time at the upcoming wedding.

Seasonal would seem doable for mi also, not long ago I finally finished reading the 1 to 10 issues that i bought from you mind you I did finished my rings of life quilt very soon after i had received issue ten but with other "things" going on I haven't been able to start any other projects neither have I even intend it to print out this last free BOM; can't find enough hours in the day and kept thinking that I'm probably not such a great woman thank you for reminding me that we are all Humans after all.Thanks Jenny.

it is a wonderful magazine that you produce and will be a little sad not to have it pop in the inbox monthly. i do understand and it is very important to have time for family and friends too and to rest and stitch whenever you feel like it. i will look forward to quarterly issues now and will keep up to date with your happenings more on here. i hope you have a wonderful day for kezzies wedding later in the month.