Before I go any further, can I ask you to pray for our Blossom...
Behind the scenes here at Elefantz HQ, our sweet Blossom has been in hospital.
She's now five months pregnant with her first child, and deliriously happy about becoming a mama.
But her health has always been rather fragile, and right now her red blood cells are very low so she's had to receive Haemoglobin through an IV. She's also had some other blood issues and received two courses of blood thinners.
After three days she was allowed home and is now catching up on lost sleep (something hard to get in hospital when you're being woken up every two hours for obs and bloods and scans and tests), but she's still in need of more IVs over the course of her pregnancy and a second heart scan in a few weeks.

Between my Club stitching this month and trips to the hospital, I've also been putting together this simple new design, "4 Calling Birds" using a few of the beautiful fabrics Lecien sent me from their Flower Sugar Holiday prints. 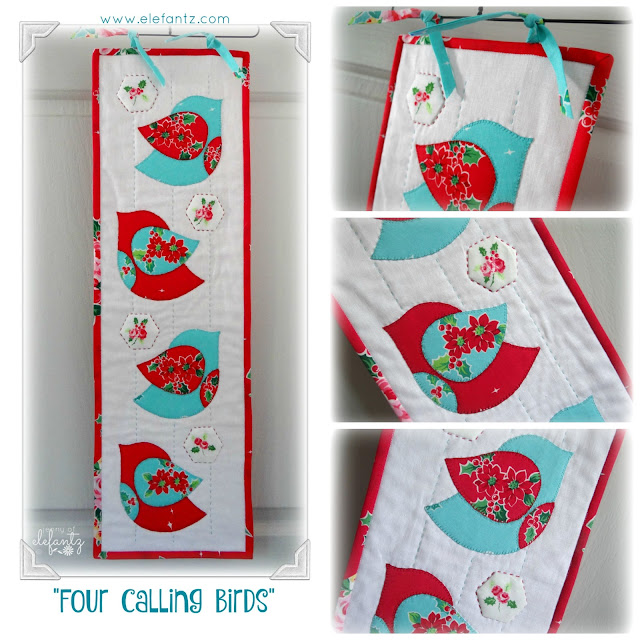 After drawing up a three-part bird template I fussy cut sections from large print red and aqua fat quarters for the wing, breast and body sections, before fusing them one above the other down a long narrow piece of white linen... 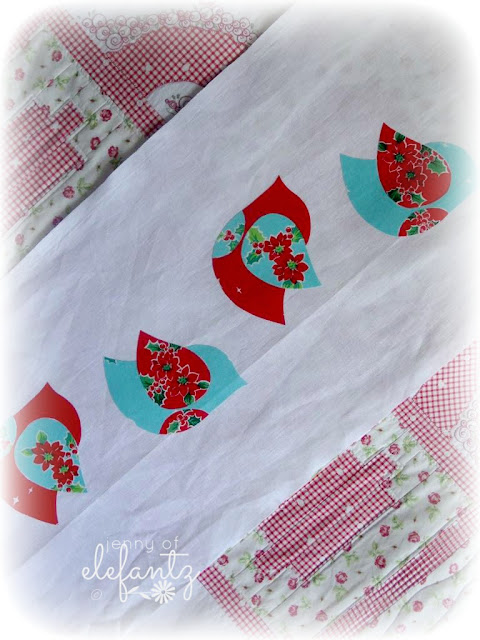 I blanket stitch appliqued each section of the bird shapes with either Aqua or Red Perle #12 threads.

The next step was to make four 1" hexies. I chose to fussy cut them from an off white fat quarter so they'd give the finished appearance of floating around the birds.

After this I fused cotton quilt wadding/batting and backing fabric behind the linen to make a 'quilt sandwich'.

To quilt in a way that would compliment the design I drew three lines down the length of the linen with an erasable pen, then blind stitched the four hexies in place between the birds, sitting each one across an outside line.
Using the Aqua Perle thread I sewed along the lines with a running stitch, and then around the hexies with the Red Perle thread. 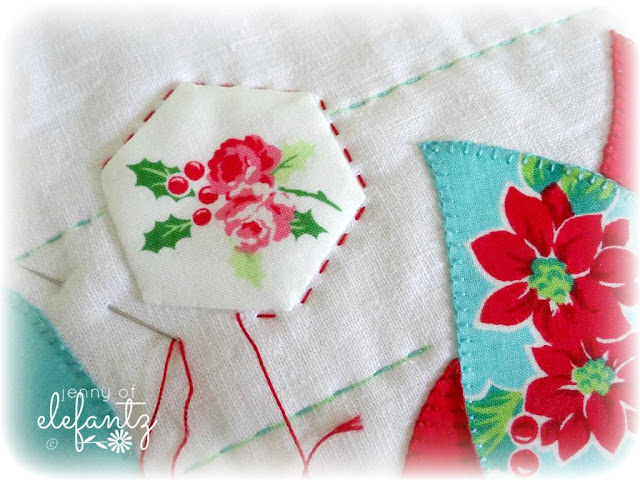 I also hand quilted with running stitch around each section of the applique birds. 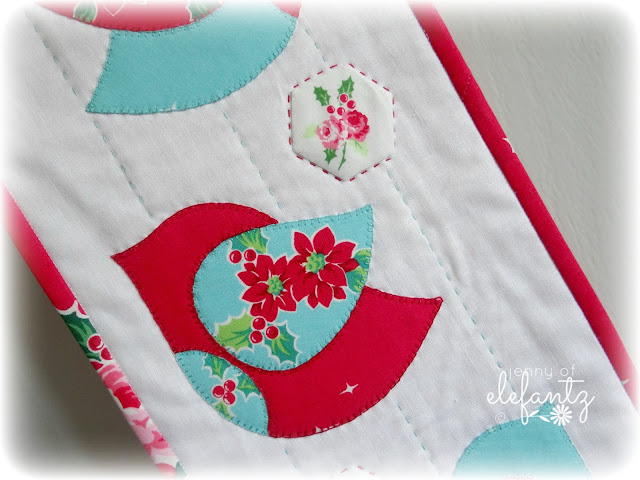 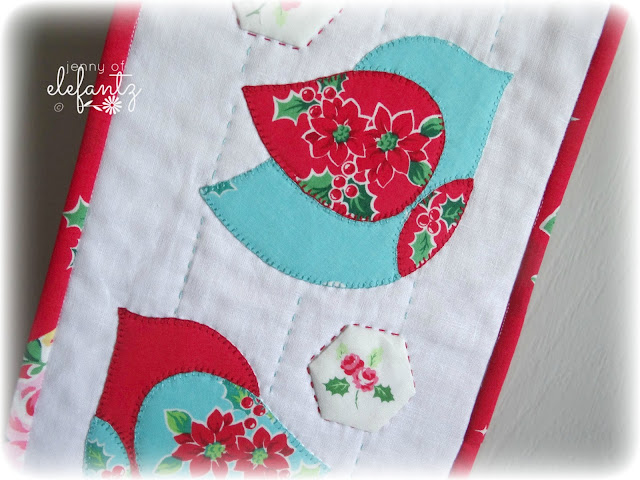 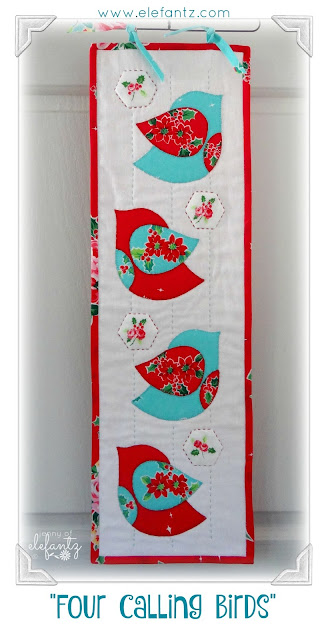 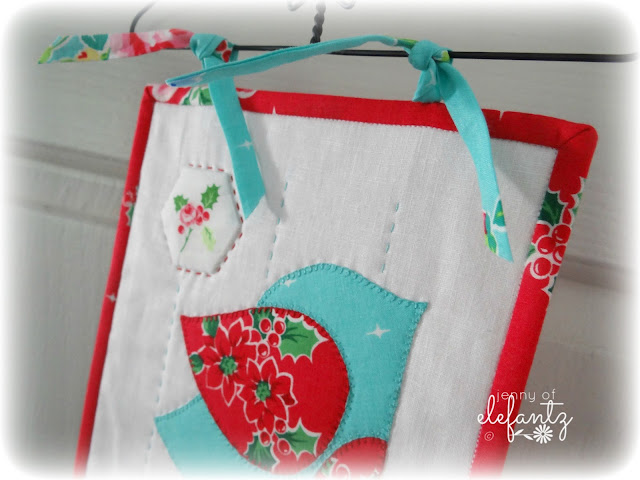 I think this little project turned out rather nicely!
DOWNLOAD THE FREE BIRD TEMPLATES HERE
Do you love stitching birds?
In the shop at the moment is the pattern to make my Sweet Tweet Quilt!
You'll find it here. 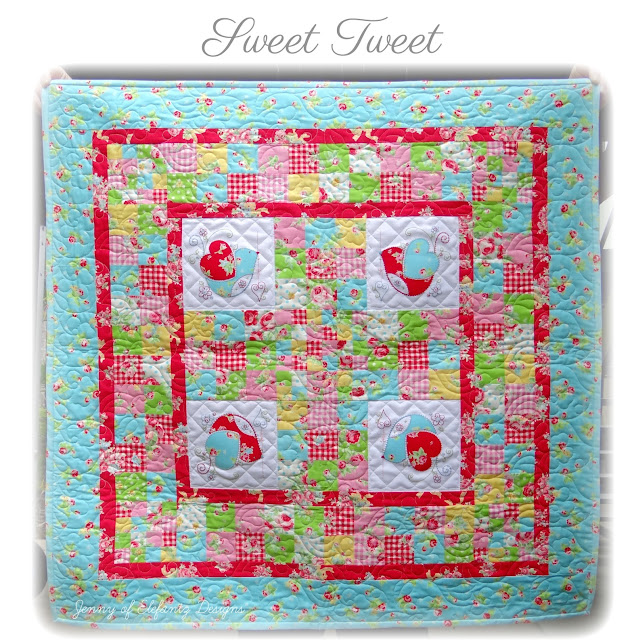 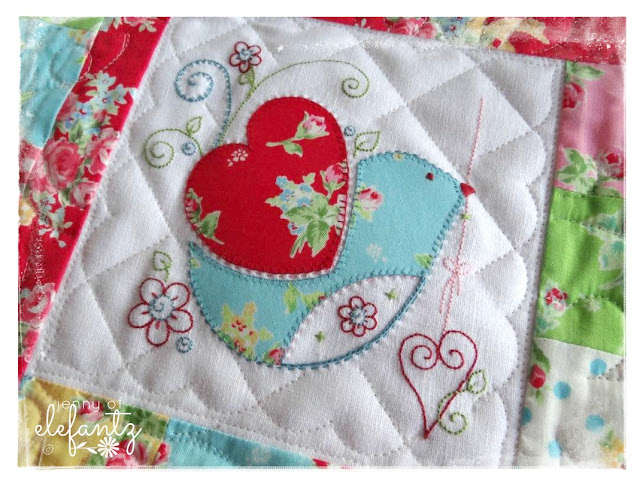 I'll be praying for Blossom and baby till I hear she is doing well,and peace with strength for rest of your family. Mental anxiety can wear you out quickly.
Your bird hanging is so cute, thank you.

Prayers for Blossom and all of you not to get over stressed and worn out. Anything I can do let me know.

Lots of Prayers and Healing Energy for Blossom and Baby and all your family. Strength and calm will allow Blossom to be able to create the soft toys for her precious little new one. Four Calling Birds is beautiful and thank you for sharing the patterns. Blessings Jenny Dear...

Saying prayers for Blossom and her baby for all to go well, as well as peace for the family.
Thank you as always for the beautiful patterns, and sharing your talent with us Jenny.

Lots of prayers and love to Blossom and her bub and too all of you. Hugs

Sending hugs to Blossom and you, Jenny. xx

Dear Jenny:
I wish the best for your family. I pray for Blossom with my heart.
Your new pattern is beautiful. Your work does the fabrics more sweet.
Thank you very much.
God Bless You and your family.
Hugs for everyone ( especially for Blossom and Aisha ) xxoo

A prayer for Blossom and her baby, thank you for the lovely pattern. Take care, Guida.

Many angel healing hugs to dear Blossom, you and your family. It must be quite stressful for you all especially her hubby.

Special prayers for Blossom and baby. You and your family are in my thoughts and prayers xx

Dear Jenny,
praying for Blossom and her baby with all my heart.
Many hugs,
Karen B. ~ Todolwen
xo

Hope Blossom and her baby are doing better now.... love to you all! Christine x

Prayers to your precious daughter and baby.

I'll be remembering Blossom...a thought is a prayer and I will keep thinking of her until you tell us all is well...which I confidently predict.

Love that quilt. I love birds and I love that colorway.

Much love to you and your family. Blossom and the baby will be fine..I just know it.
xx, Carol

Will pray for your daughter Jenny....

Praying for you sweet Blossom and her baby! I love your 4 Calling Birds!

Sending up prayers for Blossom, baby girl, the doctor, and grandparents. May you feel the arms of God enfolding all of you as you relax and trust in Him.

Praying for Blossom and that precious baby. It is so hard to see our children and grandchildren in such difficult spots. Praying for God's healing hand to be on them and that you may all feel His peace during this difficult and worrisome time.

Blossom and baby will definitely be in my prayers as well as her beloved and you and your beloved. Tell Blossom to rest and not worry about making her baby anything. The best thing she can do for her baby is to take care of herself.

The birds are cute.

Lots of hugs and prayers for Blossom. I love your bird panel Jenny. xx

Praying for you all! Once again, beautiful work!

Sew sorry to read of Blooms illness. Sending lots of healing hugs. Take good care of your self Blossom..

Of course Jenny, I will say prayers for her and your entire family during this time and over the remaining months. Your design is adorable and will be so fun to put together. Thank you for creating it and sharing it while so many other things are going on in your life. Have a wonderful creative day filled with love, laughter, family and restful times to make you and Blossom strong.

Said a prayer to the Great Physician who knows us all while we are yet in a womb. May He guide the doctors on the best course of action and may He make Blossom's body receptive to treatment.

I will certainly keep Blossom in my prayers!

Jenny, Hugs, Blessings and Prayers for you all! Thank you for another beautiful project.

May God hold Blossom and her baby in the palm of His hand, and give your family His gift of strength to support her with your love
Val E.
Wales

Of course, lots of prayers coming your way for Blossom and the baby. Thanks for the beautiful design as well.
Love Alison x

So sorry to hear that dear Blossom is having health problems. I will a her to my prayers. Blessings and prayers to the little one as well. Take care of yourself as you support her through this difficult time. Your designs are sweet and happy. Thank you.

I'll be praying for Blossom and your sweet grandbaby Jenny. Sorry to hear there are problems but with your prayers and the prayers of all who love your family will carry them through. I know your faith is strong and prayer changes things!

We are sending prayers your way for your Blossom and baby. You will give her strength Jenny, through your strength and love. And receiving all these prayers from around the world will see her through to good health. Blessings to all.

Hugs and Prayers as Always. Arohanui

I will definitely keep Blossom in my prayers.

Such sweet birds. I will continue to keep Blossom, Aisha and the little ones in my prayers. I have been since you first posted they were both having health issues. Hugs and prayers to you as well since I know it must be hard to see your babies not feeling well.

Definitely prayers for Blossom, and I've also put her on the temple prayer list for the next two weeks. I love all your birds, but these are especially appealing - and I love the quilting on the little quilt, too, the way the edges make the heart shape. Thanks for showing that!

Special prayers are being said for Blossom and her precious baby girl.

Sending a prayer for Blossom and her baby girl. xxxx Glenise

My thoughts are with you all Jen 💗💗💗

all the best to your daughter and of course to you and your husband.

Praying for your daughter and the rest of the family! Just wanted to let you know!

Your precious girl and her wee one are in my prayers daily, dear Jenny! LOVE the calling birds, brilliant design and I can't wait to make it!

Thank you for today's message! Sometimes He does seem distant, yet I find it is I who has moved, not Him! I appreciate your journey. And, my next start is your postcards--better than paper greetings when something special is needed!