The pink and green idea...

I think it may have been about a year ago that I went through all my pink and green fabric scraps and cut 100, 5" squares to make a simple quilt.
At the time my plan was to have it made within a few weeks, perhaps a month - after all it was just a case of sewing together the squares and adding two borders - but life stepped in and the little tub of pastel squares was stowed away under work projects and completely forgotten until last month when they were re-discovered. 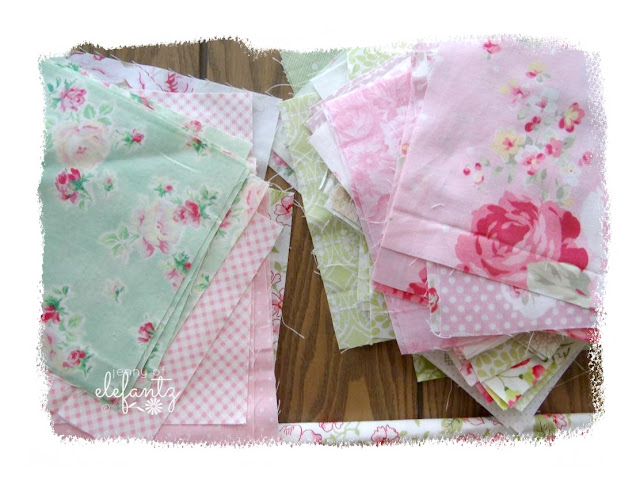 As well as the one hundred 5" squares I had also put aside a piece of floral yardage and a half yard of green tonal fabric for borders and binding plus a few 5" wide lengths of extra prints 'just in case' I needed more squares. 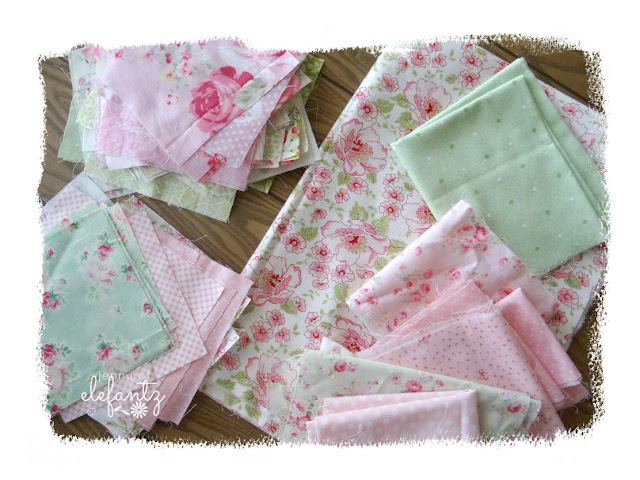 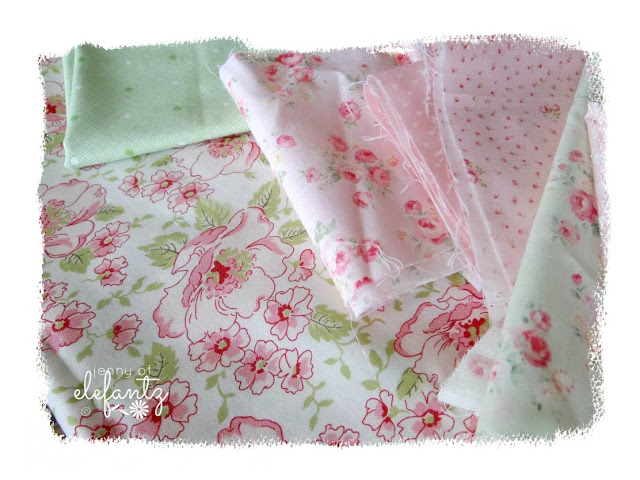 Such pretty colours and fabrics, I thought they deserved a little more care after waiting so long for their moment to shine so when I was choosing the thread colours for December's Stitchery Club designs they were inspired by these fabrics.
I had the idea that perhaps I could scatter some embroidered blocks through the quilt when I eventually make it?

Now the only thread you won't find inspired from my pink and green quilt fabrics is the blue and that's because I needed a contrast colour that would allow the stitchery blocks to stand out from the quilt.

(the 'blue' decision was made after a jolly good chat, large coffee and generous slice of cake with my friend Heather one Friday) 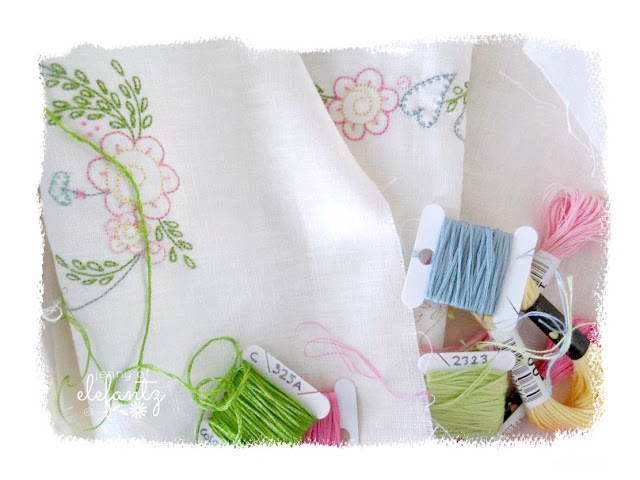 Have a look at the blocks below.
See how the little pops of blue prevent the embroidery from getting lost in the fabric. If the stitcheries were all pinks and greens, even with that tiny touch of lemon at the centre of the flower, they would lose quite a bit of impact... 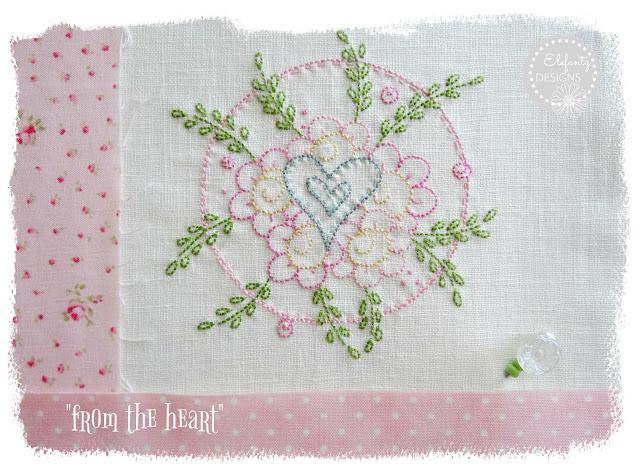 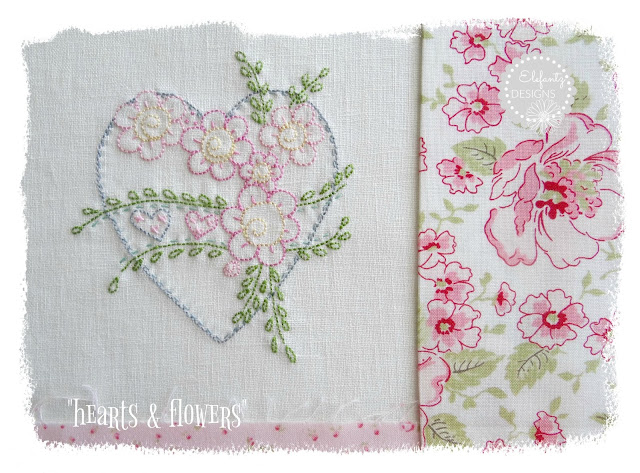 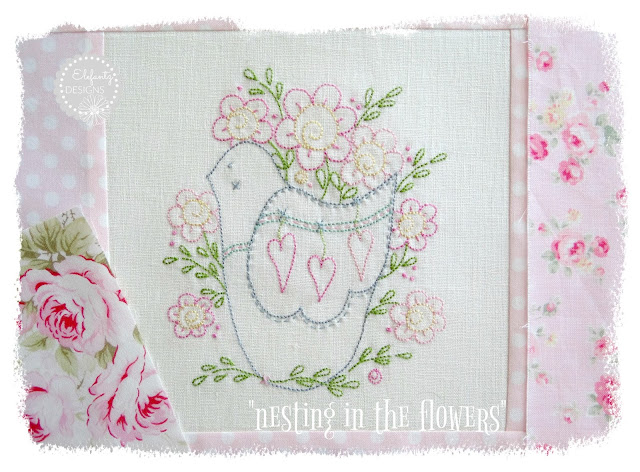 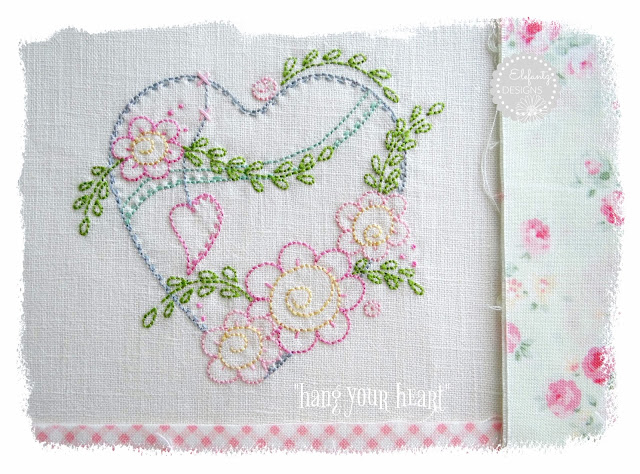 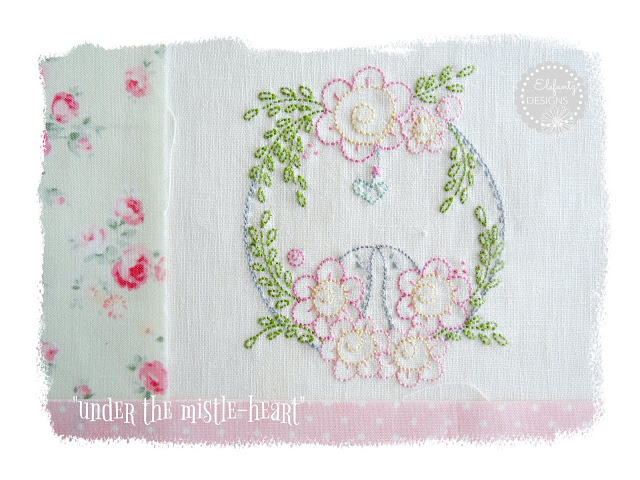 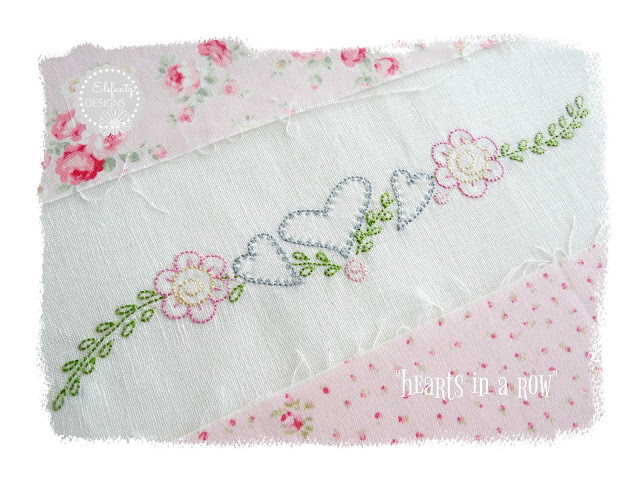 I do hope the picture in my mind for what may become a lovely lap quilt actually eventuates.

One of the six designs is long and not very high, making it perfect as a border for the bird block if I stitch it four times and add small fabric squares in each corner... 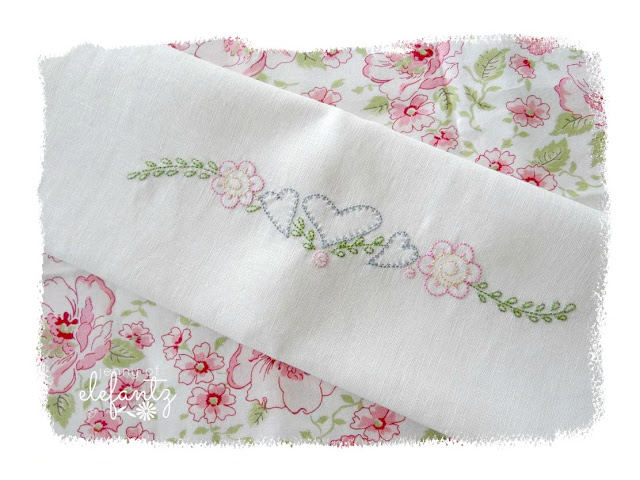 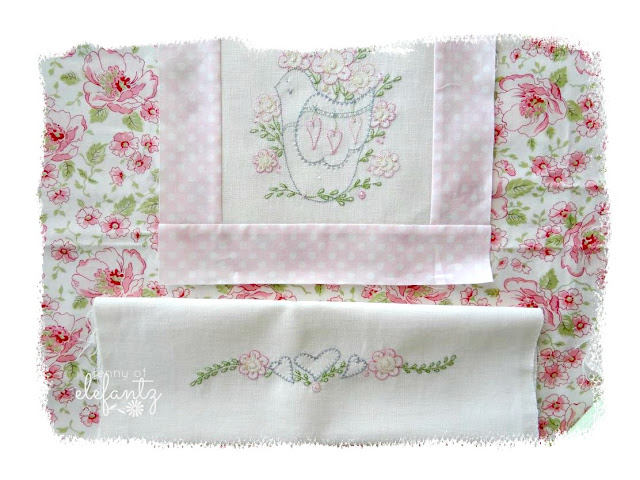 ...which would then make the centre of the quilt a 'medallion' and I quite like that idea.

This project will not be a quick one but hopefully it won't languish on the shelf for another year either.
As I play around I'll take some photos and you can watch my progress and perhaps you can cheer me on from the sidelines?

Tomorrow Allie will be sharing the final block in our combined 2016 BOM, "Postcards From Heaven". Hasn't this been a wonderful year of free Scriptural stitcheries?
You will love the December postcard!
Here's a sneak peek at my version of Allie's design... 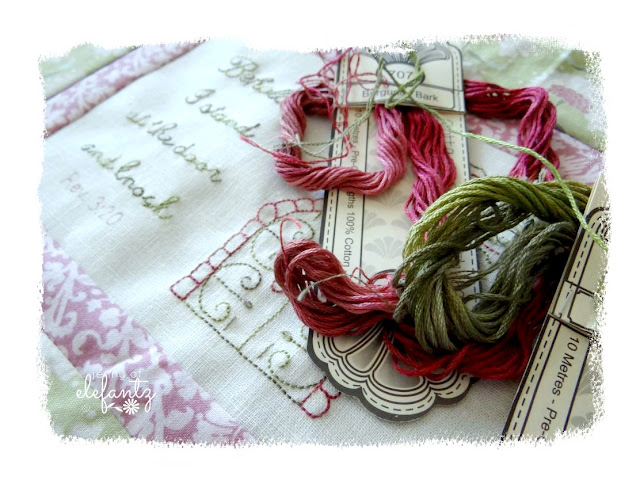 In my next blog post I'll show you the finished block and also the project I made using the completed Postcard stitchery.

These would be lovely as a holiday project and then stitched into a wall hanging  or quilt.
And what about as a gift? You could trace them all on fabric, purchase threads, pack them in pretty paper and gift them to a friend who loves to embroider. Sounds simple, but they are often the most appreciated gifts to receive...

Posted by Jennifer Reynolds Jenny of Elefantz at 7:36 PM
Email ThisBlogThis!Share to TwitterShare to FacebookShare to Pinterest
Labels: pink and green, Postcards From Heaven BOM 2016, simple quilt, The Stitchery Club 2016

This looks like a fun project, Jenny, and I will be anxious to watch it develop! Once again, you have succeeded in inspiring me!

I love your ideas for the pink and green quilt! Pink is not my thing, but I could use blue and green, easily. I love what the bird block will become with that border, too. I'm so glad you rediscovered these blocks and then were inspired to add the embroidery blocks. I think they were intended to wait on the shelf for all that time. Sometimes we don't achieve our full potential without some shelf time. =)

I'm sure I've said it before, but it bears repeating . . . I just love your lovely work!!

Jenny,
These designs are quite dear! They are gentle and domestic. Linens could be enhanced into gorgeous heirloom creations with these designs.

Your pink and green quilt is going to be so pretty, Jenny. xx

Just beautiful. Thank you for sharing your ideas yet again. Liz

Beautiful Jenny, love the pinks and green gorgeous fabrics and your lovely embroideries work perfect, lots of inspiration and ideas here, thank you, and thank you for all you share on your blog. All the best to you and family, Judithann :-)x

Love it! So pretty! I love pink and green is such a nice color to compliment it. Thanks for sharing! Nancy

What gorgeous designs and those fabrics are just awesome. Cant wait to see the finished quilt, it will look amazing. Guida

Loving your beautiful designs and fantastic stitching. Thank you also for the idea to add a color into the embroidery that isn't in the fabrics, not something I would have maybe thought of, but it adds so much. You inspire us! - Diane from Minnesota

Pink and green combined with your beautiful aweet Stitcheries will create a lovely quilt. My favorite idea for gift giving is to your thought to create a Stitchery gift package. My least favorite part is the tracing and if someone gave me those as a gift I would be able to stitch when waiting for appointments and such. Thank you luv for always inspiring me with your amazing designs and projects. You are Priceless!

I like how you added the little running stitches inside a motif of backstitch. Really makes it look more complex!

Oh Jenny, as you know, I just love all that you do...the Lord is so good. Thank you for always inspiring! xoxo