Another hospital visit and the next free vintage kitchen block...

Nana used to say "It never rains but it pours" and so it's been with our family recently.
This morning Cully May, our 3yo ball of endless energy, decided to climb, climb and climb some more till she reached the highest place in Blossom's kitchen where the medicine is kept safely out of harm's way. She then chewed and swallowed a codeine/paracetamol tablet which Blossom takes for her migraines.

It was as she swallowed that chewed tablet and her face screwed up (because it tasted awful) that Blossom caught her, at first thinking Cully May had eaten a vitamin but then discovering the more sinister truth.

I met them at the hospital and we were seen immediately, Cully May monitored for the next five hours. 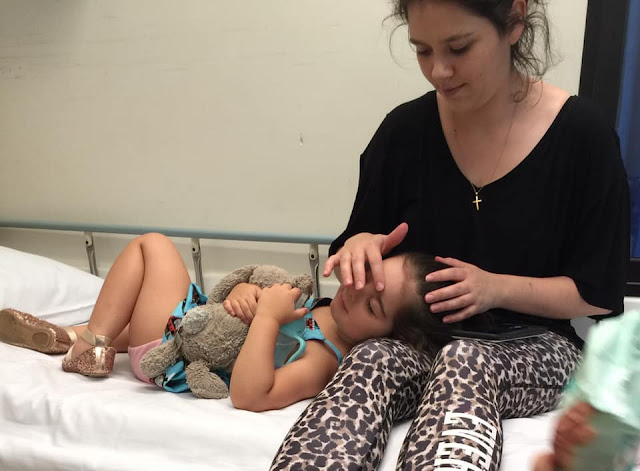 Initially very drowsy and just wanting to sleep, she picked up as the hours wore on and after regular monitoring by the nursing staff the doctor gave us the all clear to take her home.
Praise God! There was a lot of prayer offered up in the hospital and Mr E was praying at work too. 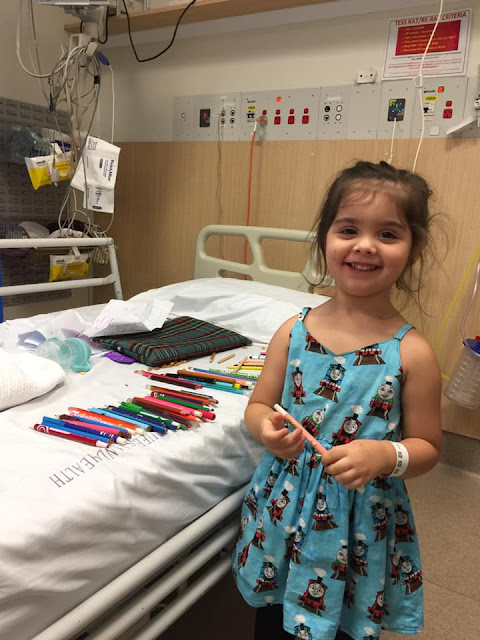 Blossom was amazing, so calm under pressure (takes after her dad) which is important in situations that can frighten children. We're just so relieved Cully May is fine and the emergency is over.

A motorbike accident, a dog bite and Cully May in hospital - all within 13 days.
Mr E, Blossom and I all agree that we could use a break from accidents and hospitals right now! 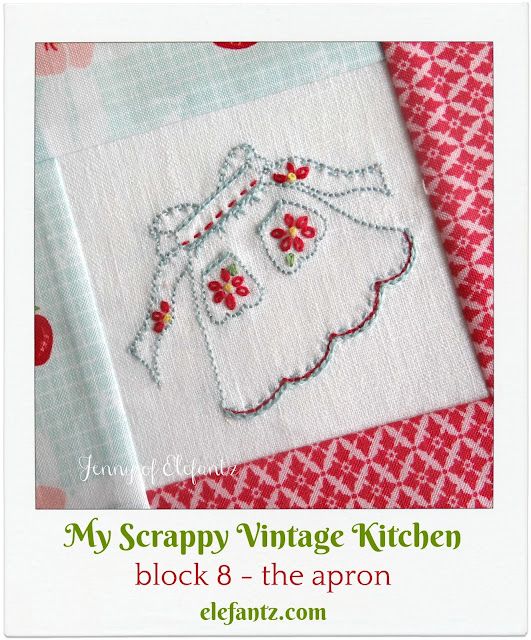 I'm showing the second last block in My Scrappy Vintage Kitchen today and it's one of my favourites, The Apron. 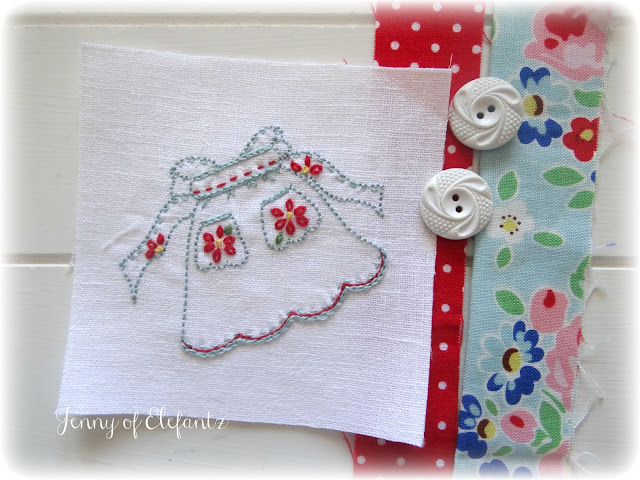 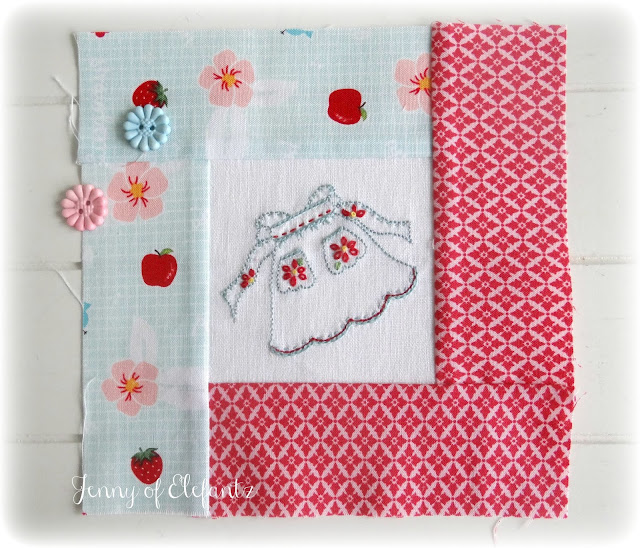 We're planning a quieter weekend than those of late and I do pray your own will be restful and calm as well.

Excuse me for the short post today but there's a cup of chamomile brewing and a dear husband waiting to watch a documentary so I'm going to sign off and settle in for a restful and hopefully uneventful evening.

Thank you, Jenny. The apron is so cute. I hope this weekend is drama free. Remember Isaiah 43:1-2.

So glad Cully May is well.Kids do keep life interesting! Enjoy your restful time with hubby & the cuppa.

Your Blossom has done wonderful. Being calm in that situation is so hard but so the best thing to do. Your family has really done well this past week or so in trusting in God and sending those prayers up to Him for his peace and calm in all situations. So pleased Cully May is alright. Time to reflect this weekend on His goodness to us all.

There's a saying about "it comes in threes"! You have had them!
Thanks for the vintage apron!
Wishing you an uneventful boring weekend :) I mean that in a very good way !
hugs,
Joanne

So thankful Cully May is fine!! Wishing you all a relaxed weekend. Love this next block for Vintage Kitchen especially. Beautiful fabrics and colours in your block!

Wow so thankful Cully May is ok!! Blossom might want to invest in a lock box of some sort. And hopefully all the excitement you've been having will ease. Thank you for this wonderful apron block

You have had enough medical problems. Stay safe and hug those grandkids. Just goes to show that no matter how hard you try, you can't fully protect those kids.

What a crazy few weeks it has been. Fortunately for all concerned, at the end of the day everyone is well. Enjoy your chamomile tea and I send you my wishes for uneventful and even "boring" days ahead!

I hope you have a wonderful weekend that is restorative to your health and energy and it is stress free and full of fun with your family, Thank you for block 8 in this series. Sending hugs and peaceful thoughts across the miles

They say things come in threes so hopefully that's it for a while. You can't take your eyes off them for a minute, the little monkey climbing up so far. Thankfully she was OK. They take years off your life with that worry but great that Blossom is so calm.

So glad Cully May is ok. That is such a scary thing to have happen. Thankfully Blossom caught her and realized what she had taken.

Kids move so fast. Happy to hear Cully May is well. Poor Blosom. We all try so hard to keep kids safe. My daughter adopted 5 kids, all under 14. So, you can imagine. But, we try. Poor YOU,too! When it comes at you fast you hardly have a moment to really relax or think. Hope your husband is recovering nicely, too. If you are like me, I tend to lean toward the creative to relax when it gets all crazy. Your little embroidery apron is darling. A good part of life is cooking and sewing. Thank the Lord for getting us through the unexpected, once again. Prayer and praise get us moving in the right direction when we are frazzled. I am praying that the emergencies and hospital trips stop, and that God put a hedge of protection around your family. Take care.

Prayers being said that no more excitement of this sort for a while.

So glad Cully Mae is all right!! A friend of mine had his then 4 year old find a roommate's meth and he ate that. Poor baby was up for 4 days straight in the hospital, but the Lord protected him and he has had no ill effects. Needless to say, the roommate was immediately removed from the home!! Children certainly work on giving us grey hair and wrinkles! Praying for a whole season of peace and calm in your life.

What a beautiful child Cully Mae is. I can just see the mischief in her eyes and her smile. Thankful to God for her mum's watchfulness and the hospital's care. your apron pattern is very sweet, and I have just downloaded it. I am a wee bit behind with my blocks, as I don't have the last one stitched yet, but I will print this off and prepare it so I can just sit and catch up when I am ready. Hope your dear hubby is on the mend from his daring hen rescue. Both of you enjoy a peaceful weekend.

Gosh Jenny! I am just catching up on your posts - what a merry old time of it you have had - I do hope Mr E & dear wee Cully May are feeling lots better by now. thanks for the wonderful pattern Jenny - I have been downloading all the blocks & hope to stitch it up at some stage. Happy Sunday to you my dear friend xx

I'm so glad her curiosity didn't take her into even more troubled waters. The Lord was watching over your sweet little girl! Blossom looks calm, and I love the little pink shoes Cully May is wearing. What a two weeks (fortnight) it has been for you! I hope the next one is much calmer, and you've had a lovely weekend. Thank you for the apron block!

Thank you Jenny - another pretty block. Glad all is well now with Cully May - what a worry. xx

Oh gosh I feel for you all. And when you think they can't get to them... they find a way. I too have codeine for my migraines but my kids have never show any interest in them or many particular things, none of the three of them. For my middle daughter whom is now 11 we did put those cupboard and drawer catches on them as she loved to explore. the first daughter, once I said NO once (quite firmly) she never touched it again. thanks for another beautiful block. Everything comes in threes and I'm suspicious of the number 13 so you will be fine now.........hehehe.

I remember catching my boys, both in footie pajamas, standing on the countertop covered with gooey liquid - they had each drank a whole bottle of cold medicine. Tucked them under my arms like footballs and off we went. I had to help feed them activated charcoal - we spent so many hours there - but they had apparently spilled more than they swallowed. Such a scary thing for a young mum to go through, thank the Lord you were there for her and everything's ok!!!!! Praying for your entire family, dear heart....