Back to the needle and thread...

It feels as though January has been passing quicker than ever, and my hopes of bunking down and getting a lot of sewing done over the school holidays hasn't gone exactly to plan.

We've had a very dry last few months and the temps have been high enough that sitting in one position with fabric across one's knees has been a tad 'feverish' to the body temperature. We've no air conditioner in the house and only one ceiling fan plus two pedestal fans strategically placed around our living space. None of this was conducive to sewing.

Finally on Sunday the cool change arrived bringing with it much needed rain - and thus, a return to my needle and thread!

I have been following Lynette Anderson's "Noah's Ark" BOM since I discovered it last November, but just wasn't sure that I wanted to make the tiny little embroideries into a wall hanging so I've held back from starting. With the arrival of two of my young grandsons for a visit next month I thought it would be a beautiful heirloom if I made the blocks into a book instead - something I can bring out and read to each of the grandchildren when they visit, those present and those hoped-for in the future. I'm only embroidering them at the moment until I decide how I can design a cloth book to house them.
These are the blocks I've done so far, the dove still waiting to be finished. 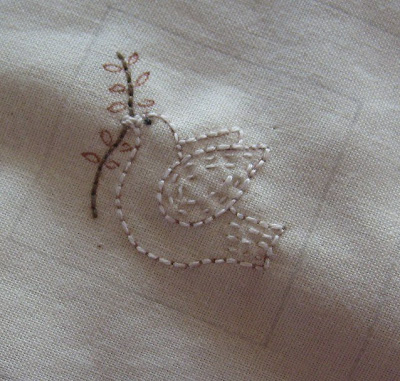 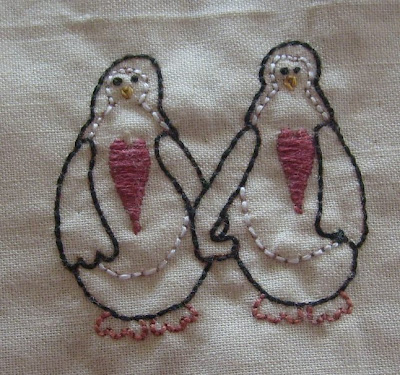 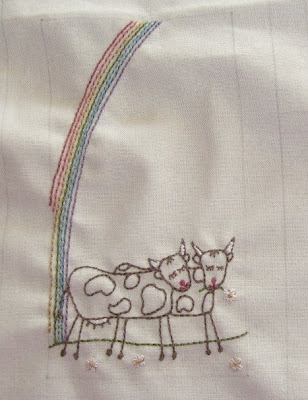 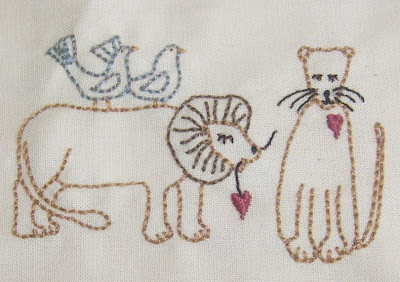 I've also been working on something else - an idea to help me with my 2009 goal of debt reduction (which you can read about on my Dollars to Sense blog!). More of that in the next blog entry though. ;-)

Posted by Jennifer Reynolds Jenny of Elefantz at 5:34 PM
Email ThisBlogThis!Share to TwitterShare to FacebookShare to Pinterest

You're just so dern talented!! I went to a craft store (called Michael's) today and bought one of those looney plastic scarf looms . . . and tons of cotton and wool yarns . . . I won't be using the finished goods in Hawaii . . . anyway, I should finish my son's x-stitch from when he was born, but I keep seeing all these loomed pieces at another gals blog and it got me started on the circle loom again and . . . that's how easily I get distracted! Anyhoo - your stuff is, again, very beautiful.