From paper to fabric ...

The photos in National Geographic always capture my attention. Not an issue goes past my eye where I do not see at least one snapshot of life that I want to re-create in thread.
In late 2007 I decided to have a go at doing just that!

We had a lot of old copies of National Geographic we'd picked up at garage sales, or rescued after thrown out by the library - copies we'd saved for Blossom due to her love of wildlife photography - and as I skimmed the pages there were a particular set of photos that were exactly what I was looking for. Desert nomads with their camels...so beautiful in their colours, so dignified in their demeanor. I began immediately.

This was the first photo I chose to work with. I made a photocopy, then outlined the main features I would use as an embroidery. 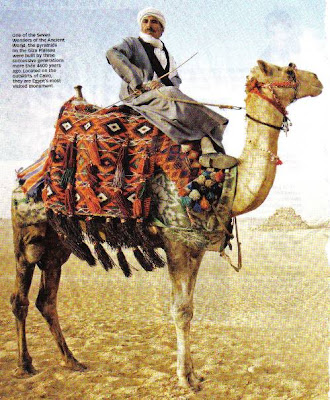 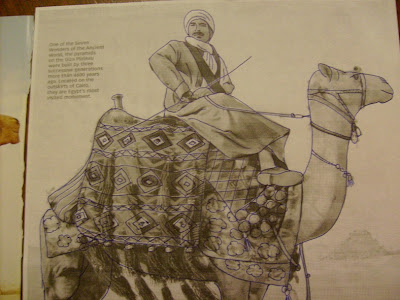 Then I traced the outline onto some very desert like tone-on-tone cotton. I used vibrant coloured DMC threads, fitting the picture I wanted to recreate. When I'd finished the stitchery I used just a bit of colour pencil to define certain areas, like the camels knees and the nomad's clothing, and added beading to some areas. 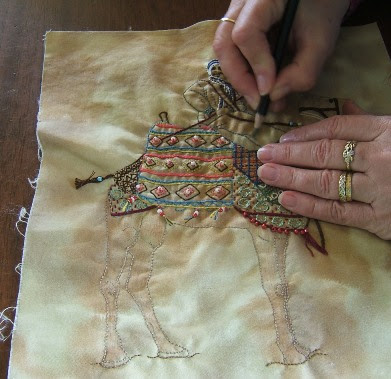 I chose red wool felt for the borders of the embroidery, and used Perle 8 threads to stitch with. I chose more beading and with no pattern in mind I just embroidered my way around the cushion front until I was happy with the bohemian style. 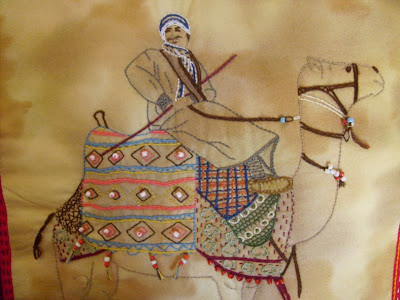 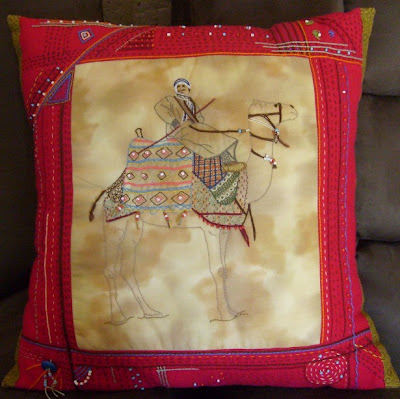 Now that I'd seen this could work I set forth on cushion number two! I chose a complementing photo from the same National Geographic article and repeated the photocopy, highlight, then trace procedure. 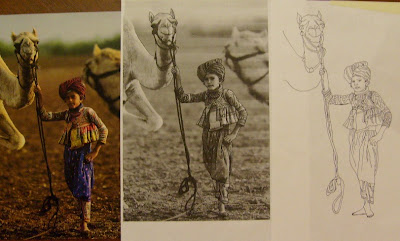 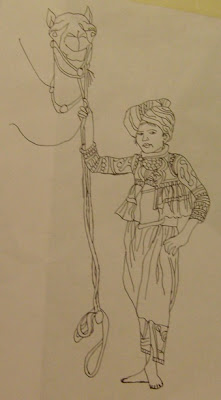 Staying with the red felt borders I again winged it as I embroidered! I had a lot of fun with this and the felt is so soft to sew with. I gave this cushion to my son-in-law for Christmas. 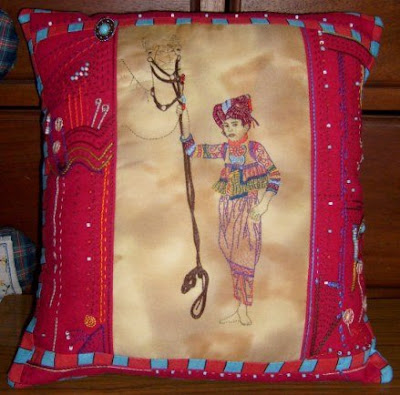 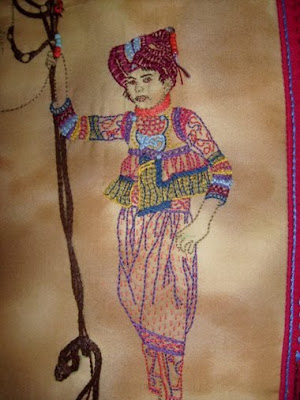 There was a third photo in the article that I wanted to work with but decided to put that aside for another day (which has not yet come) and do something different. I chose this elephant - it was a photo of a scarf I found on google, but I could see the potential to do something more with the design. 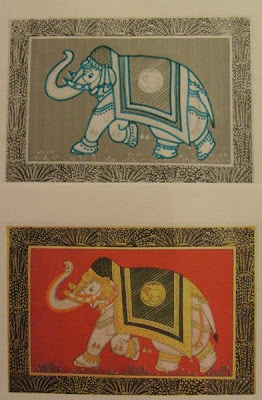 It became a funky shoulder bag for Blossom, and won 1st prize in it's category at the same Show as the Desert Nomad cushion. 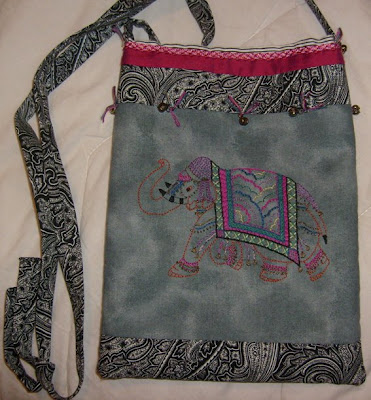 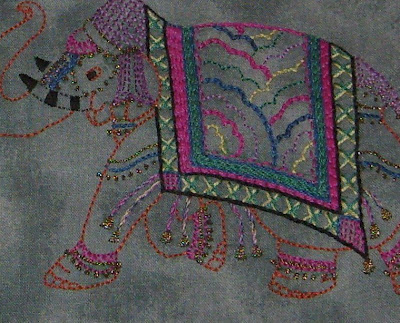 There is really no end to the things that can inspire creative endeavours!
Even now I'm eyeing off a coffee mug with stunning artwork - roses, my favourite - and thinking I need to bring it to life with some pretty thread....

What inspires you to create?

Posted by Jennifer Reynolds Jenny of Elefantz at 8:23 PM
Email ThisBlogThis!Share to TwitterShare to FacebookShare to Pinterest
Labels: tutorial

Wow! Those are absolutely amazing, you are very talented.

I love going to quilt shows/meetings and the art gallery. Other inspiration ideas are from magazines and the world around me. You have done a wonderful job. One of the wall quilts I made came from an illustration in a children's book. I collect children's books that strike a chord with me when I look at the artwork.

These are absolutely stunning works of Art!! Congratulations and well done! Your explanation is like a tutorial. I may be tempted to try it one day.

Jenny...I am not sure how I found you in blogland but I am soooo glad that I did! You have such amazing talent and share it so willingly. You inspire me everytime I read your blog! Thank you soooooooo much!!! Today's entry was so informative...thank you!

My Life and Quilting said...

Oh my goodness those pictures are so wonderful! Great idea! My grandparents had National Geographic when I was young, I used to love to look at them! Color inspires me to create. I love to see how people use color. Thanks for all your kind words on my blog. Happy sewing!

C'mon! You are over the top blessed with a GIFT for this stuff. GORGEOUS work!! Bravo, girl, this stuff is awesome!!!

I'm waiting on my order of new DMC (Holly ate my current colour). I also ordered the stitch kit you have shown us (Our Lady of Guadalupe). I was so happy to find a company who sold it!!

God bless you and thank you for your prayers while we transition to move. I've a plan to make some things once we settle in - if all works out well, I shall give you some of my humble beginnings.

Your stitcheries are amazing! I've wanted to try to convert some cross stitch patterns to embroidery but I haven't tried it yet. One of these days...

It's a double wow from me! Your embroidery is amazing.

Did you see on 'Sunrise' this morning that your town is one of the top 10 towns in Australia?
Lucky you.

Your embroidery is wonderful and so very creative. What inspires me? Being around creative people and learning from them. thanks

Stunning. Just stunning. You have an amazing gift!

wow!amazing job you have done there! I jut love it

Oh, well you are a great source of insprirement. I love your blog and have seen so many things I want to make some day, maybe a bit different but the inspiration came from you.
KATRNI W.

Beautiful!
I usually look through magazines and the Net when I want to make something, but I am not a designer type, like you, I am more of a follower. I like it when all the instructions are given to me precisely, and then I follow them and am very accurate in my work. Usually :-)
Kristina
priscillacraft.blogspot.com

you show me work like that then ask what inspires me...gobsmacked I is, I aw and ahhh and your creations..and feel that one day I will be able to get back into more fiddlier crafts....hoping that hand is not getting too much of a workout yet????

Your work is remarkable. Outstanding. I love seeing the pictures of the things you are doing.

Jenny, that is simply awesome! You are such a talent! Beautiful embroidery! Thanks for sharing that! I will have to give it a go sometime! 8-)

Oh my goodness!!! You are so smart and talented. What a great idea. I love what you have done! Inspiring!

They are all fantastic. What a talent you have there.

Es una belleza tus imagenes y haces una excelente combinación de técnicas, disculpa por el idioma.It is a beauty your images and you do an excellent combination of technologies(skills), excuse for the language.besos

You make very, very, nice embroderies! I like it.
Trillian

WOW, this is really impressive, you do beautiful work and it is making me think maybe I can trace and design too. Thanks for the inspiration.

Wow!!! I don't have any words! That is so beautiful and amazing. Thank-you for sharing your process with us!

I guess I would have to repeat what everyone else is saying WOW! You are very inspiring. i may have to give this a try.I have quite a few old National Geographic magazines. I'm going to start looking at them in a different light.

Your work is really beautiful! :)

Jenny, I've just seen these on your blog! They are gorgeous! I specially love the one with the man riding the camel.

Hi Jenny, wow what a neat idea. so beautiful. never thought about anything like this. Will have to check out my national geo. for sure . cool , cool ,cool