We are home!
Our 1000+klm Far Ride in 24 hours was fantastic, but oh, my tired behind is happy to be home. Same boots, same jeans, same socks...you get to a point - at about the 800klm point - where you just want to hit the shower and scrape off the sweat, dust and cinders (we rode through a bushfire).
Home was soooo appreciated when we turned the last corner and caught sight of our front gate. But let me start at the beginning...
We rose at 4.30am, had a quick coffee, some strawberries and yoghurt, and rode off at 5am. It was dark and cool, but an hour into the ride the sun made an appearance... 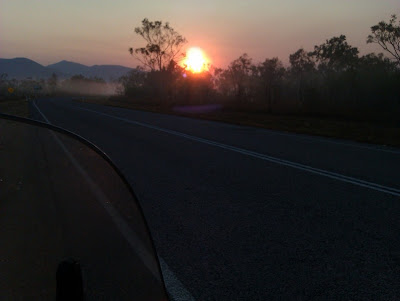 ..and quickly we warmed. I had relished the early cool air because I knew it was only a matter of hours before we'd be scorched in the tropical sun.
And we were! It was a long hot ride down the coast before turning west from Mackay to our mountain destination, Eungella. This was only our second short stop in 6 hours. We just had to hydrate with some long cool iced teas! 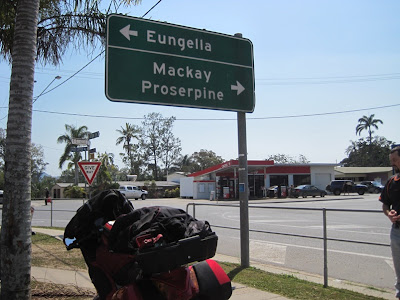 We also needed a break before the ride up the mountain!
It is a very steep ascent with hairpin curves all the way and sheer cliff drops along the road side... 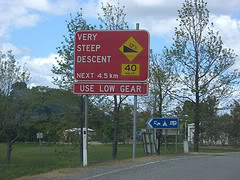 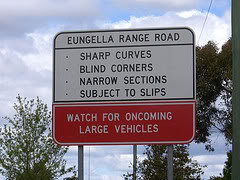 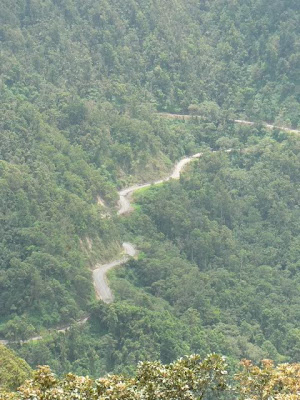 It was so worth it, though!
The view from the Eungella Chalet was breathtaking. They even have a ramp for hang-gliders to leap from! 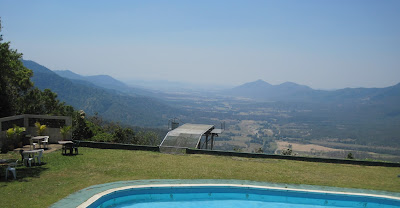 The rules of this Far Ride were for all participants to arrive at the Eungella Chalet between 11.30am-midday.
There were so many riders arriving with us, and I was glad to see a couple of other pillion wives as well. 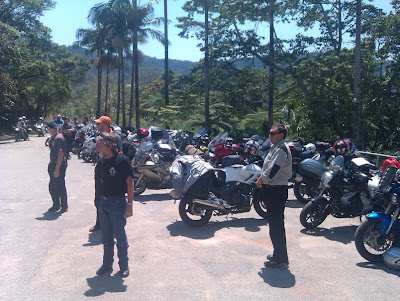 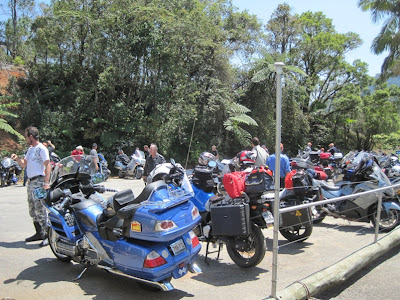 We even caught up with John and Andrea, fellow Ulyssians from the Townsville chapter. We had camped with them at Mt Surprise in July! (you can read about that trip HERE) 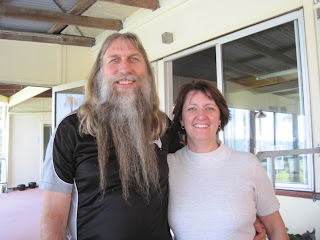 Once the formalities of signing in was over it was time for lunch and socialising.... 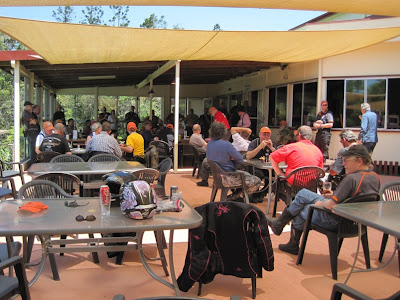 then a good peek over that cliff drop... 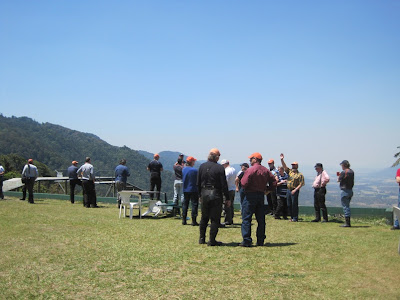 John and Andrea had their camera, so Mr E and I were able to get a rare photo together... 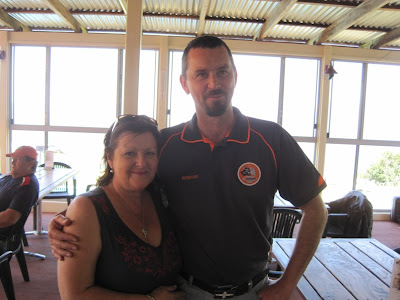 The bandana helped with the helmet hair for the first 600 klms, then it was useless. However, long rides like this don't happen all the time so I'll be wearing a bandana for our regular 250-300 klms rides on Mr E's days off from work.
In case you wondered, there were a couple of riders that arrived 20 minutes late and couldn't be counted in. Poor guys! We heard them roaring up the last of the mountain, only to discover they hadn't made it before midday.
All up we had around 60 people who had ridden from Victoria, Northern Territory, ACT, NSW, and of course Queensland. Mr E finally met many of the people he knows through an internet riding forum, and stories were shared back and forth over the 90 minutes we all spent at Eungella.
Of course, the time ended too soon before we had to ride back down the mountain and off to our various locations to complete the 1000 klms.
A few hours later Mr E and I were heading back up the coast between Mackay and Proserpine when we hit a roadblock. Bushfire! 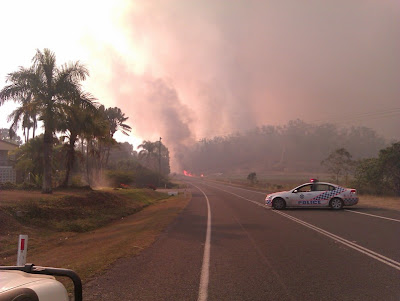 30 minutes later - hot, thirsty, and covered in cinders, the road was opened and we continued on our way.
I was glad to see the bush firemen had saved a sugar cane crop, and averted the fire from claiming the home of the plantation owners. Our bush fireman certainly are amazing men and women, and with Spring temperatures around 36C (97F) all day, they had it tough.
Today we are sunburnt, sore, and tired - but happy. Can't wait to do another Far Ride in the future!
Hope your weekend was just as great!
Hugs
Jenny
xxx
Posted by Jennifer Reynolds Jenny of Elefantz at 7:57 PM
Email ThisBlogThis!Share to TwitterShare to FacebookShare to Pinterest
Labels: Biking with Mr E, Riding with Mr E

it sounds like a great trip Jenny glad you both had a great time.

Hi Jenny, What a Trip it must have been amazing, the photo of that twisty road up the mountain made my tummy hurt, I bet you were a bit smelly by the time you got home. Go you!!
Love Jillx

Oh, I don't think anyone's weekedn can beat that, lol! Good on you, Girlfriend!
Hugs - Lurline♥

Wow what a trip that was. That road sign says it all. Amazing the launch pad for hang gliders.

lovely photos.. I love Eungella
some gorgeous swimming holes and platypus in the creeks-if your lucky enough to see one..the ride up is very scary if your on the road at the same time as a milk truck..and the skydiving ramp has an awesome view if you crawl out (heheh I was sucha chicken),glad you arrived home safe and sound,cheers Vickie

What a wonderful adventure! THe scenery from that mountaintop was amazing.

I love reading your adventures! Karmen

Sounds like you had another wonderful adventure, but oooooHHHH my tailbone is hurting just reading your log. I need a much more comfy seat.

Looks like a beautiful, although gruelling,ride. Could you please tell me what "pillion wives" are?

OMGosh - just popped in for the first time in a while, was reading away, and remembering your long road trip up to where you live now and sending encouraging words to you along that journey, when I realized that you were on motorcycles and heading with a group on a "ride." Well did I chuckle at myself (a regular event in my life ...). What fun! Thanks for sharing.

Wow what a trip - that's epic! I don't like the look of that road, and I doubt I would have gotten close to the cliff edge, lol. But it looks like a fun ride all the same! You and Mr. E are adorable!!!

I agree with Allie, you two are adorable.. Sounds like a trip we should plan for a holiday from Victoria..

Sounds likea fun day, even though it was exhausting. In the USA these rides are organized by the IronButt Association and they have badges that you can send in and get with documentation. My dad completed one of these.

What a huge day. I was thinking of you. We've had big days, but few that long. The heat would have been very tiring. It sounds like you had the best time. The views and scenery are really spectacular. Definitely worth the effort.

You and Mr. E look great! Those long 1000 k rides in Canada are called "Iron Butt " runs, too. That is one sweet ride you shared with us. Loved it! My butt hurts at the thought of it and at 36 degrees, that would be a hard run. ! I'll share this one with my driver. Glad you enjoyed it, even the cinders.
You are truly a Motorcycle Mama!