Sorry everybody.
Life gets the better of me occasionally, and I find myself needing to retreat for a while.
Blossom came home safely from the UK, and a day later was trying on her bridesmaid's dress for Kezzie's wedding in October... 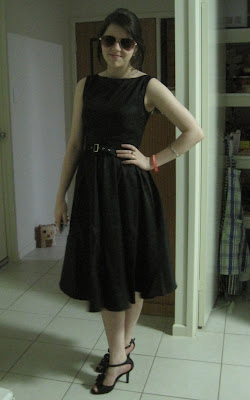 With her arrival home, she brought other news.
By Christmas she will have left Australian shores again and be on the road to a new life in England with the man of her dreams.
They have been email friends for five years...and now it's official, he's stolen her heart, and she his.
Mr E and I have just four more months of our baby girl at home, so we're trying to avoid tears as much as possible and create beautiful and lasting memories with her.
You can all console me in December, but for now I am trying hard to make these next few months really special, ok?
We've started by exploring our own town!
On Saturday we all went to the Museum of Tropical Queensland... 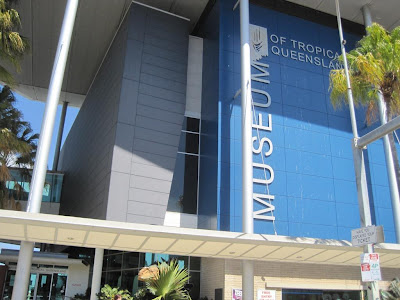 We arrived in time for Mr E to play a role as a gunner on the HMS Pandora... 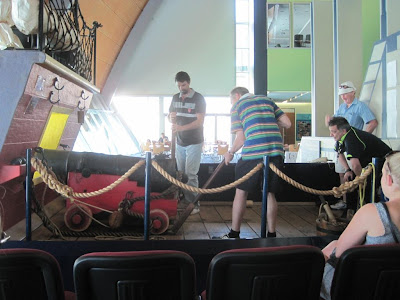 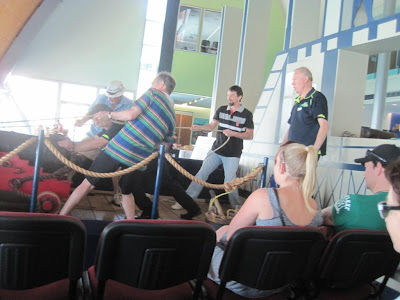 He even received a Gunner's certificate! 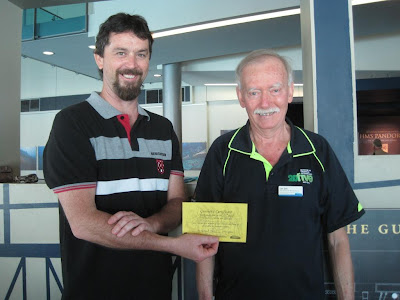 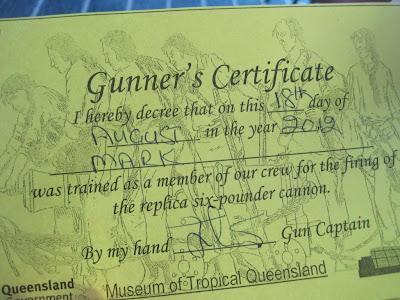 The Pandora was the ship sent by the British navy to hunt down the mutineers from The Bounty. The museum has many, many artifacts from the Pandora as she sunk off the North Queensland coast and is the most widely studied shipwreck in Australia. 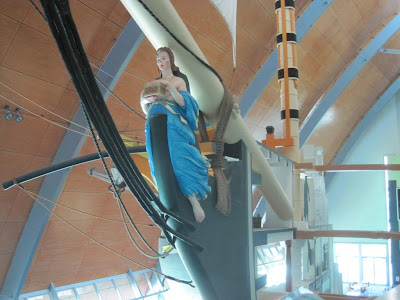 We had a few laughs along the way...
Mr E in shackles! 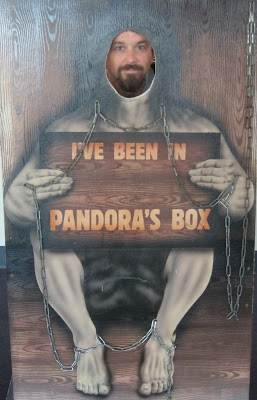 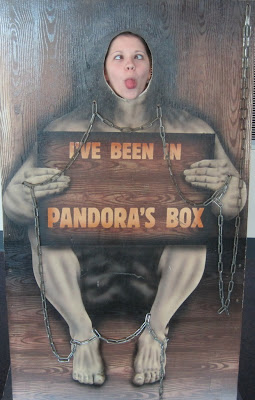 I, unfortunately, was beheaded instead! 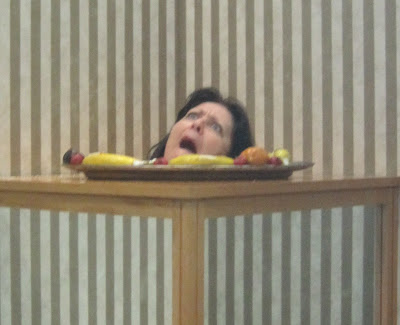 There is an entire section of the museum just devoted to the art of Taxidermy... 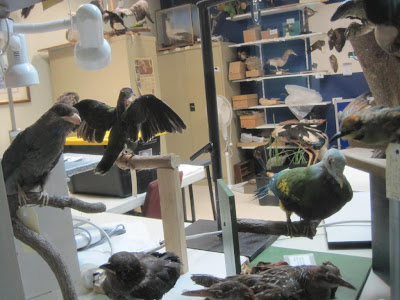 ...but that was pretty yukky for Blossom and I. Mr E, however, thought it would be a wonderful occupation. Erk!!
~~~~~
Today I am printing and packing patterns for a new shop opening in the USA early next year... 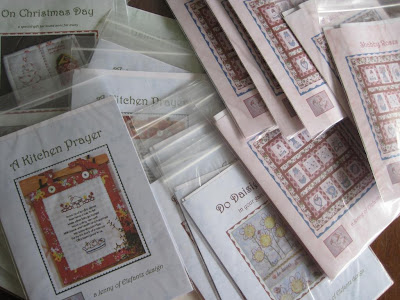 Posted by Jennifer Reynolds Jenny of Elefantz at 3:03 PM
Email ThisBlogThis!Share to TwitterShare to FacebookShare to Pinterest
Labels: Blossom

Oh poor Jenny, can you bear it with out Blossom? My heart goes out to you. I will hold you in my heart. Take care, Elaine
Good luck Blossom, you're in my heart too.

I know how you feel. My son has meet a lovely girl in Australia. He left England he said for a year He is now trying for a permanent residence permit. He loves Melbourne and his new girl. Whilst I am here in England. As long as they are happy that is all I ask. Enjoy every moment whilst you can. Pippa xx

Jenny there is absolutely nothing better than a gorgeous ending to a fairy tale love story. How wonderful for Blossom, I am so thrilled for her and her man. Life can be a happy place at times.
big hugs hunny.

Even if I love a really good love story....I need to say something. My mom raised all of us with 1 strict instruction. We were never to move further than 10 km away. It worked for some of us.....not all. Great news for Blossom, and for you maybe a good excuse to visit? I hope you all fully enjoy these months together. Who knows, he might jump the pond!

Blossom looks lovely - she is channeling her inner Audrey Hepburn.

Her 'love story' is beautiful.

Your trip to the museum looks like fun.
Debra

Your daughter is beautiful. I wish her every happiness with her sweetheart. That's something that will be a comfort to you and Mr E when she is living nearer to me than you.

Oh Jenny, It is sad and exciting at the same time when they leave the nest for the first time. My grand-daughter left for 4 months study in the US to-day. They have so much confidence in themselves these days which is wonderful. Will send warm hugs your way.
Got my parcel today Thanks Noela.

Things certainly are busy in your neck of the woods with a wedding and Blossom heading off. I'm so pleased for them both. I'm sure you will all make the most of the time before she heads off.

How exciting for Blossom to be off to start a new life with the man she loves! But I can't imagine how I'd feel or how I'd get on if Emily did that. I know you're strong though and you'll handle it in the best way possible! Hugs for you!

Lots of excitement happening in your house! It's bittersweet to see our kids spread their wings but in the end we know we've done a good job!!!

Oh poor Jenny - as much as we want them to follow their hearts we as mums (moms in the US) wish their heart kept them close to home. My youngest is talking of moving to another state in the US that will take her far from me and I get teary thinking of it. Good luck Blossom and hugs to you Jenny!
Maria

Glad that you are making memories and enjoying your time together - the place looks like fun, the photo of you headless made me smile! Take care. GB C x

I've just dropped my youngest off at college this past weekend. My oldest didn't come home from college this summer, but stayed and took classes and worked instead. It is going to be hard to get used to that much quiet, but, at least I don't have to think about them getting married for a while longer. I can't imagine one being across the ocean. Several states away is hard enough.

My heart is aching for you already Jenny. I would be devastated if one of my girls decided to go to another country to live. Hugs Kaylee

Jenny I can only imagine the difficult balance of loving to have your darlings around you, but knowing that sooner or later they grow up & fly the coop. She can take with her the precious life lessons & qualities that all started with you & MrE, her grounding in this world.

Oh Jenny, It's hard for us Mum's to actually face up to the fact that our babies aren't babies anymore!! UK is a long way from you BUT as long as Blossom is happy, then believe me, you will also be happy. Enjoy your every moment with her!
Hugs, Sue from Cyprus x x x

Oh wow! Congratulations to you regarding your dear daughter's wedding! :o) How exciting! :o)
What a terrific museum! How fun to tromp about your area, visiting sights. Being from N. California, right before moving, my family went to Alcatraz. I grew up seeing it my whole life and just never went. So glad we did! :o)

Blossom looks wonderful in that dress - someone mentioned Audrey Hepburn, and I agree! How fortunate for England that Blossom will come to live there, but a sad day for Australia.....tell him he has to come to her, instead, lol. I know, I know, he can't.

Looks like a very fun day you had - congrats to Mark! That pic of you is too funny. Look at all your lovely patterns printed out - well done, girl!

congrats to Kezzie and Blossom.
Is Blossom getting married too? I know you will be sad to have her move but it will be a place for you to visit.