As I shared HERE, my first love in design is stitchery, and I have finally gotten around to doing something I've wanted to try for over a year.
Remember my lovely Shabby Roses quilt design with those twelve large stitched and appliqued blocks?
I designed and stitched it first in 2009... 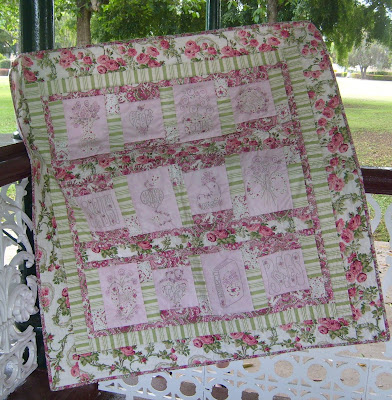 ...and then I remade it in 2011, with brighter fabrics, and a different block layout. 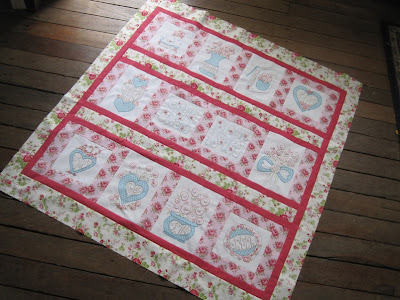 The finished quilt is 50" x 51".
WELL...I have often wondered how it all the blocks would look, scaled right down, as a stitchery?
Last week I played around for a few nights, re-drawing each block to around 2" in size. Then I placed them in borders and drew up a tiny scale quilt layout to house them. 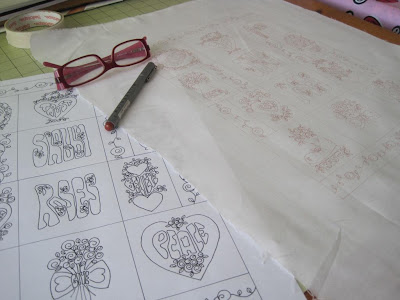 I think this has been the most nerve-wracking of all my Elefantz designs! The blocks are too small for any applique, so how to bring them to life with pastel threads alone?? But I love a challenge. 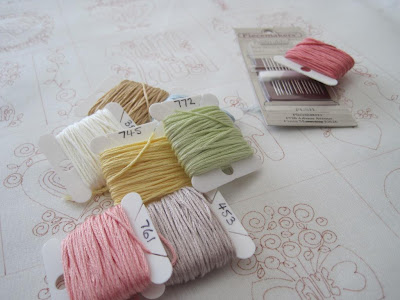 This week I've spent my evenings watching favourite episodes of Agatha Christie's "Poirot", drinking Twinings 'Prince of Wales' tea (in the new cup that Blossom bought me), and stitching my dream... 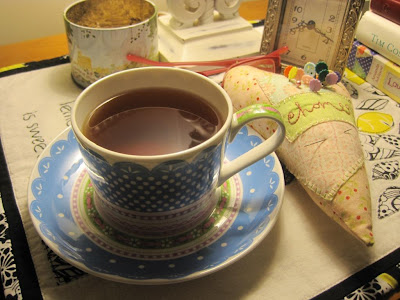 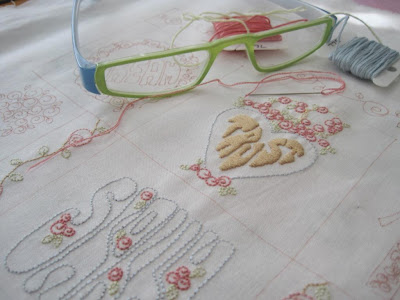 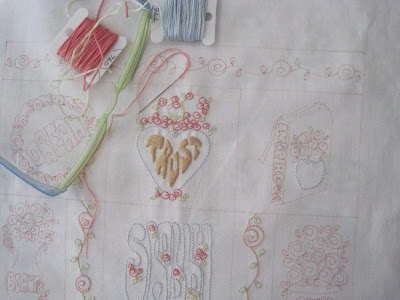 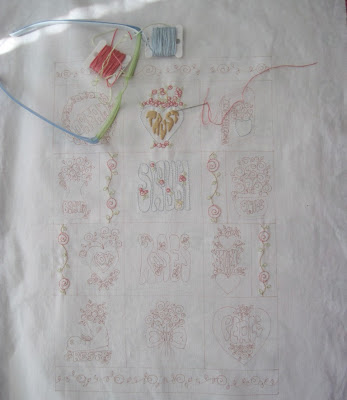 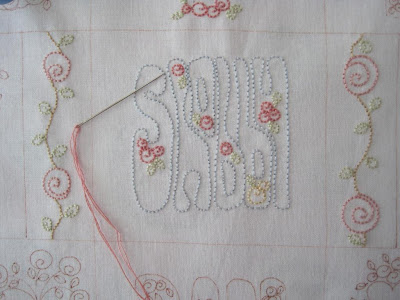 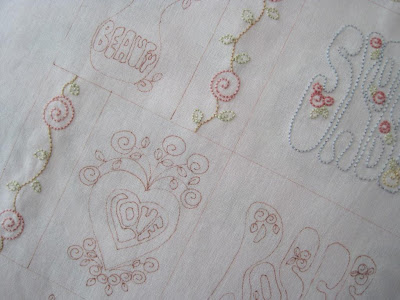 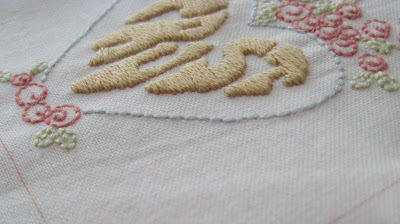 But later on there will be chain stitch in the borders.
The Shabby Roses Stitchery will be my first paper pattern release in January 2013.
What do you think so far?
*****

In my previous post I asked what you thought this new Elefantz HOME design was, and the very observant Vicki got it right!
It's a bunting!
A birthday bunting in fact! 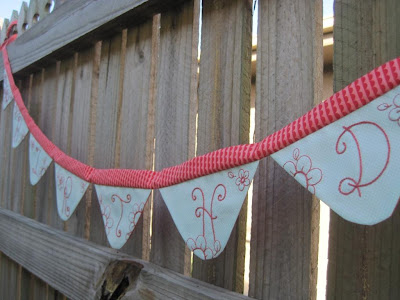 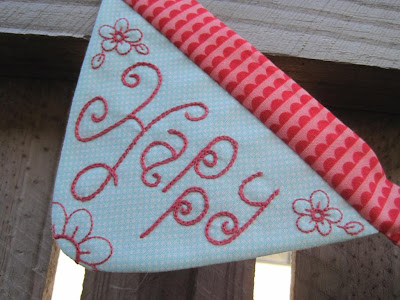 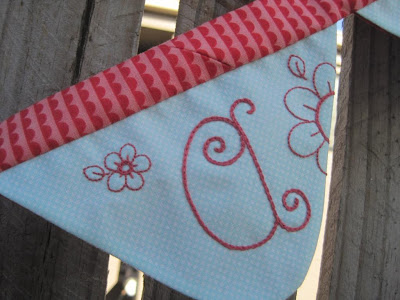 The pattern for the Birthday Bunting will be in the final issue of my magazine, due for publishing on November 30th.
Also in Issue 18 will be the Shabby Angels mini quilt, No Place Like Home cushion, and Cal's Cow Pyjama Bag (still being made).... 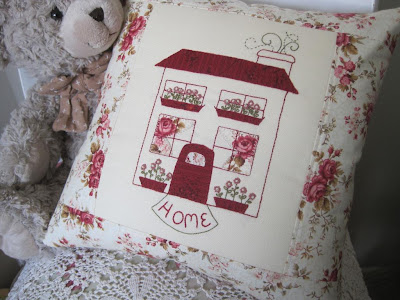 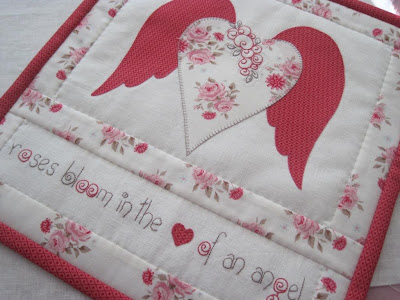 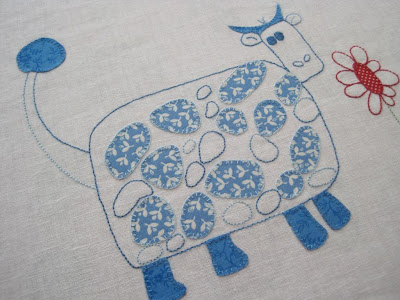 I'm not accepting new subscriptions anymore as this will be the last Elefantz HOME issue published, but the magazine WILL be available as a single purchase for non-subscribers on November 30th.
I think the four designs in this issue are some of my very best, and all of them have a sentimental attachment.
*****
I'm so excited about life after I close the magazine and say goodbye to its monthly deadlines.
You see, a new adventure awaits...

Are you wanting a new adventure too?

you ask what do we think f your new quilt, well I think it is going to be beautiful, both the minature designs and the threads you have chosen to use are wonderful.

Love your miniature. Gorgeous. The designs for the magazine look great. Hugs,

Wow Jenny, that looks great! I still have the large patterns so I hope to make these one day, but I love the small version!
Hugs
Lida

The small version is so sweet what a lot of lovely designs.

Your little stitcheries is adorable.

I love the 'mini' Jenny, I sure it will be a popular design.
I would never have guessed bunting!

Ooooo, I simply love the mini design, can't wait for it to be finished!
Love the bunting too.

OH my gosh Jenny, put me at the top of the order list for your new Shabby Roses Stitchery Pattern!!! I started the Shabby Roses quilt a while back and have 4 of the blocks finished, it is such a beautiful pattern, and I have always wanted to do these patterns in just stitchery. I am beyond excited about this! Your birthday bunting is absolutely wonderful!!! Big Hugs....
***Do you think you might do the same with your gorgeous Shabby Roses Christmas Quilt designs sometime in the future??? How lovely those designs would be in small stitcheries....

I just love your miniature stitchery, the colours are just perfect.

I can't wait to see the finished mini version of your quilt. So far it is looking beautiful!

Everything is just beautiful, i love the quilt very much...and all the stitchery as well. with love Janice

Your teeny tiny version in pastels is precious.

I love your tiny shabby roses so much, dear Jenny! And the look of all your new designs in your *sob* last issue....but I'm so happy you're having an adventure!!!!

As stitchery is my favourite thing to do, I love your new project. Look forward to the pattern being released next year. Hugs....

Shabby Roses is one of my favourites, WOW it will be small, love the thread colours you have chosen.

Beautiful designs, Jenny! Your stitching is just so lovely.

This is the first time I have been here in over 3 weeks. Hurricane Sandy knocked out my power for 10 days and my phone and internet for 17 days! We are finally getting back to a normal routine.