Late on Saturday afternoon my beloved and I decided to take a long drive out west and clear our minds of work and other concerns.
The early evening breeze was refreshing as we drove along the deserted outback road which runs west from Hervey's Range to the Kennedy Development Road. From there we turned south and drove to Fletcher Creek where we stopped for supper, then continued further south to Charter Towers before turning north-east again for the return home.
The round trip was 390 kilometres and every moment was special time with the man I love.

Earlier in the day I'd baked a loaf of bread and being simple people we decided to take peanut butter sandwiches, choc chip cookies and a thermos of tea for our supper.

This was the first real test for the Jeep since being up and running again earlier in the week.

The outback of Australia is glorious and neither of us ever tire of travelling its dusty red roads.
We pulled over on the Kennedy Development Road so Mr E could check the engine, the radiator and other 'bits and pieces'. 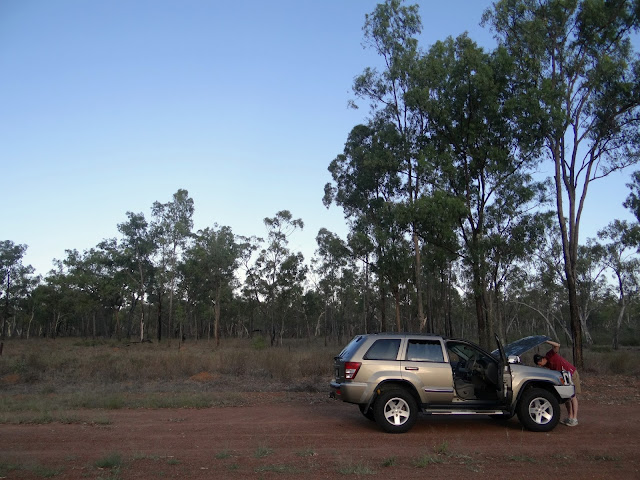 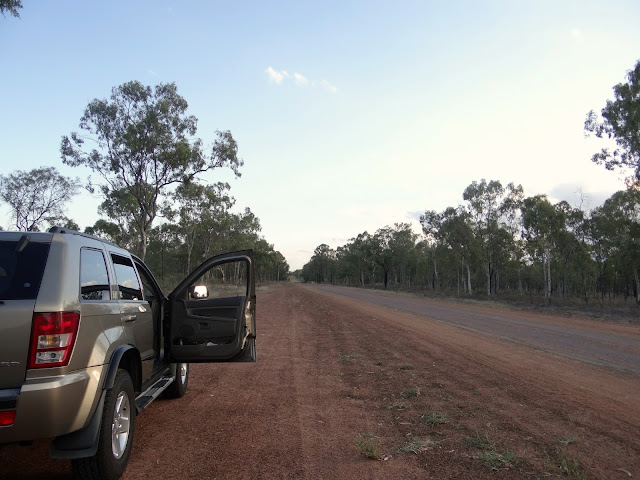 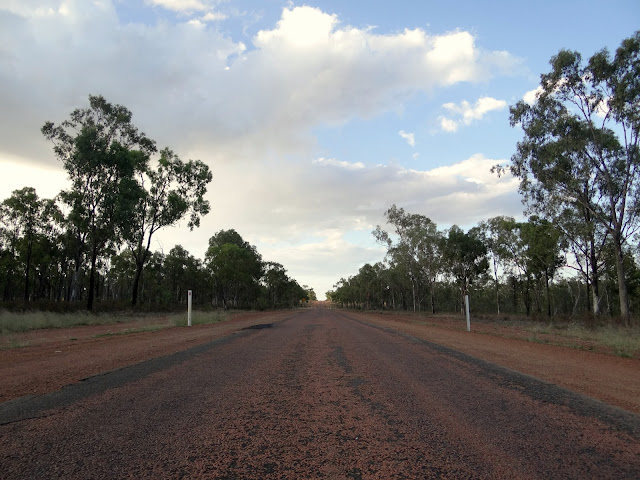 Fletcher Creek was our stop off destination for supper, a privately owned property which is open for the public to camp beside the creek as long as they like.

Some people live there for many months in old caravans or tents and set up gardens, a solar panel or two, and even keep pets. A small toilet block with a shower has been built and is regularly cleaned and maintained. It's a beautiful place, so serene and isolated from cities and society in general.

This time of year it's fairly quiet there because of the heat, but we did discover three 'tenants' quietly enjoying the serenity.

In the photos below you can see one of the vintage caravans in the distance. The dry creek bed runs through the middle of the photo but once the wet season arrives it will become a swimming hole for young people who drive the 50 kilometres north from Charters Towers over the summer. 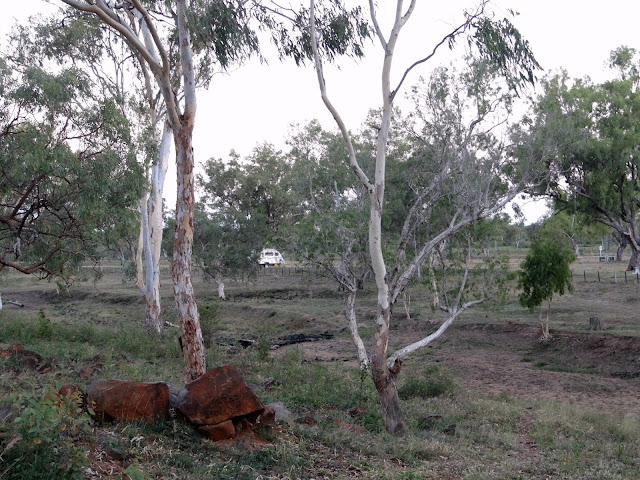 A few chooks and some cows wandered near us as we ate our simple meal... 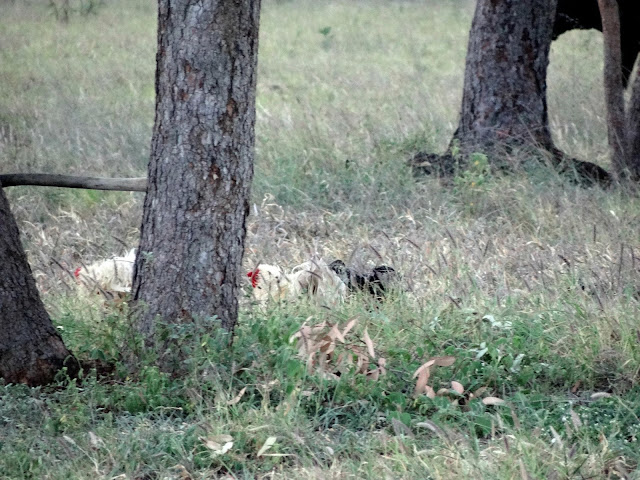 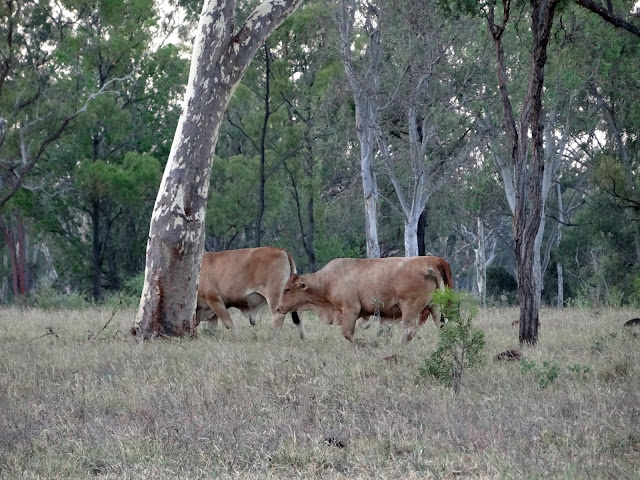 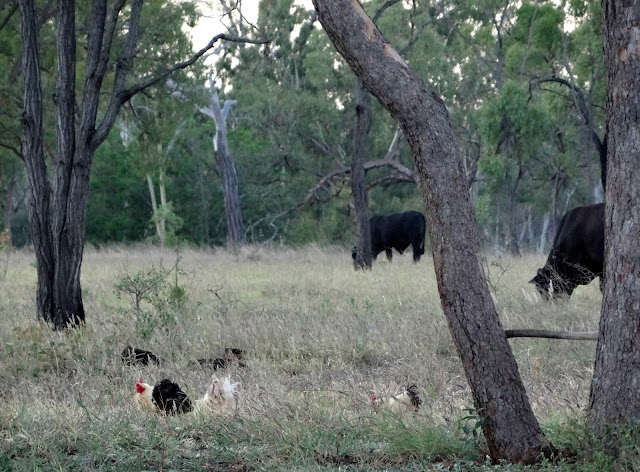 Food always tastes good in the country, especially in such peaceful surroundings. 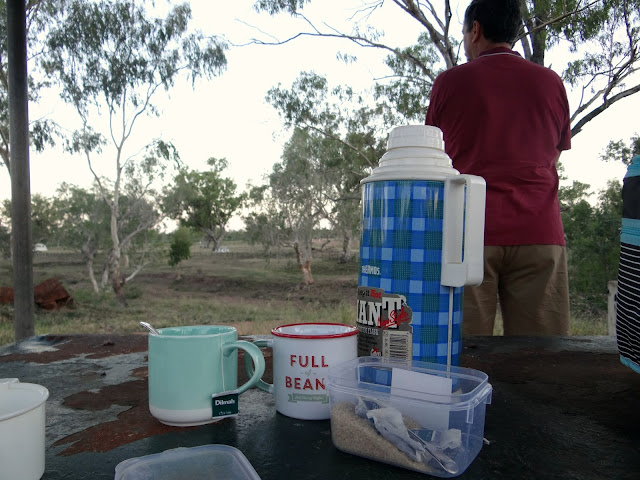 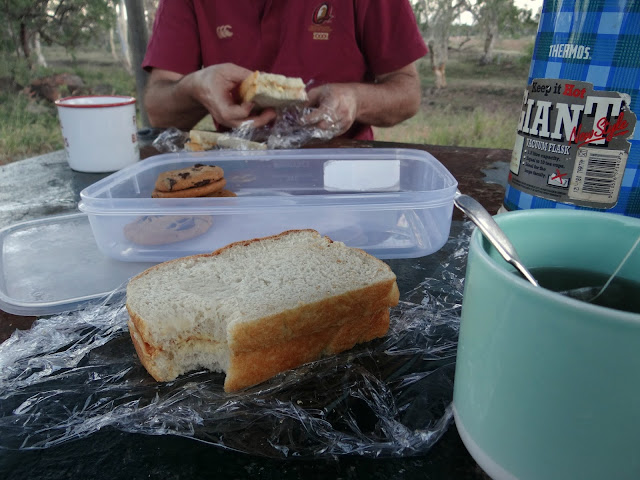 We stayed here about 45 minutes, but then the sun began to set... 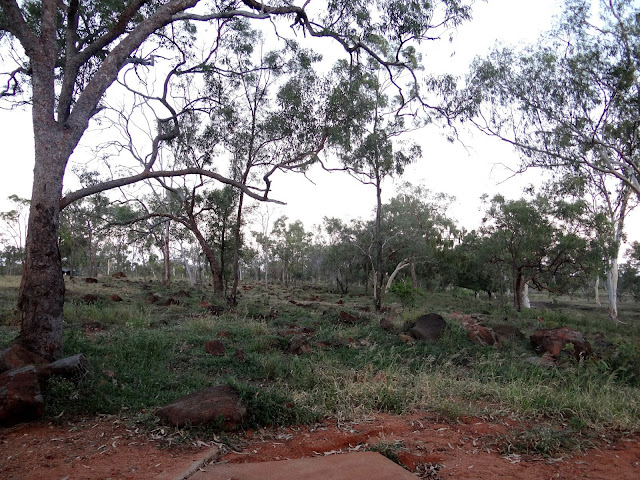 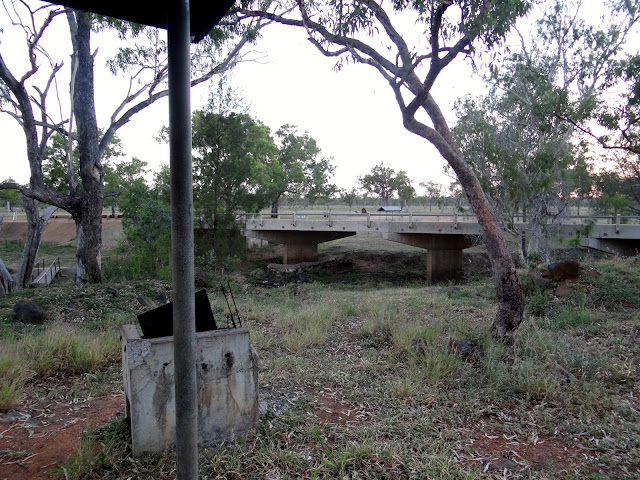 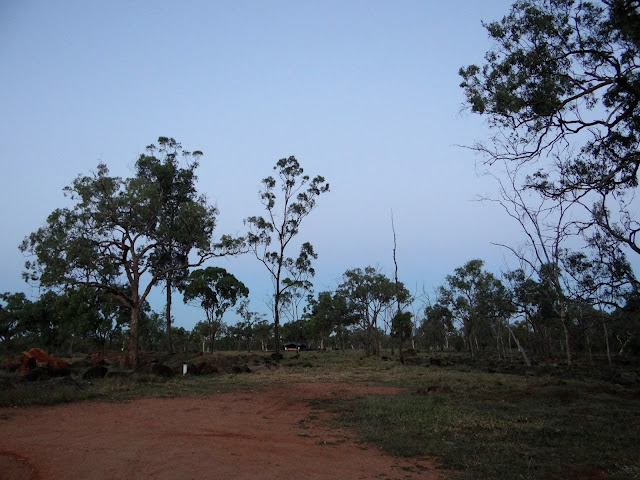 ...and it was time to pack and continue our journey.

Driving south again we saw plenty of kangaroos, cockatoos, galahs and cattle before reaching Charters Towers as night closed in.
We used to live in that lovely town so Mr E drove us to a favourite spot at the top of the hill and we sat down with another cup of tea to watch the lights come on in houses up and down the wide hilly streets.

Our sense of peace during these hours away was such that I wanted to bottle it up and bring it home as a tonic for all the days when life has taken a little too much from us...but peace is a state of the heart, a relaxing of the mind, a letting go of all that really didn't matter. It's not found in a bottle, but in closing out the hustle and bustle which can occupy too much mental space and allowing the simpler things of life to take their place.

Our final leg of the journey home was a 150 klm drive north east, back to the coast, back to traffic, back to life as we know it day to day.

Our little impromptu adventure took us five and half hours, most of it in the dark, but the effect will last for much longer. As we slid under the fresh cotton sheets late that night we were refreshed, tired and happily renewed.

The Lord led us to take those hours and escape into the country because He knew we needed it.
I'm glad we chose to listen to His prompt and act on it.

Is He prompting you to step away from the busyness of life for a while?
Trust Him, it will do you a world of good. 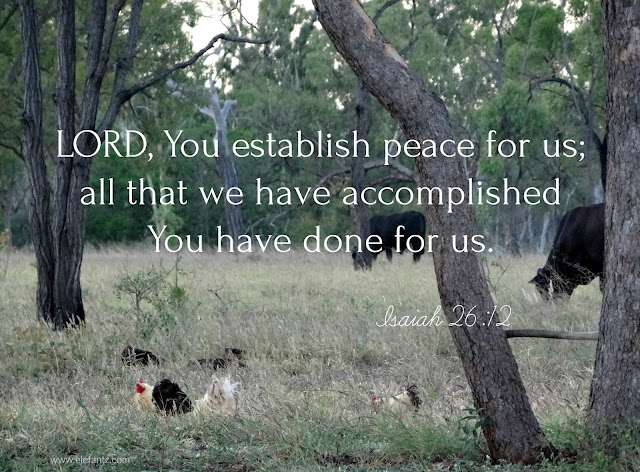 Yes we all need some R&R from time to time. It helps things in perspective. Thanks for sharing your sentiments, and pics of the world from your corner. May God continue to bring you both His blessings and peace. Robyne S.A

You are very brave to be driving at night up there, Jenny. It may not be too bad along the coast but I believe it is quite dangerous on those inland roads with roos and often cattle on the road. My daughter and her family were behind a fatal accident when they were travelling from Townsville to the Outback as the car in front hit a cow on the highway. I am so pleased though that you returned home safe and refreshed.

Jenny I love the photos of your beautiful country. I hope to journey there once in my lifetime. If I ever get such a chance You can bet I'm gonna look you up....Would that be a great gift for me to get to come to your country. Its a dream

Simple and Serene is exactly what we need from the Crazy Crush of daily life. Your time away was just right. Your tailgate picnic supper reminds me of how our family of five used to just get in the car and drive the backroads and stop along the way. Those definitely were simpler times that me and my sisters still reminisce about. Blessings from Above Sweet Jenny...xo

Loved spending your peaceful day with you. Since I live in the US I especially love hearing about your part of the world. The pictures were so peaceful. Thank you for sharing.

It is such a treat to see your photos! I always feel as if part of me has traveled to places I will never see in person. Thank you for the journey! An amazing world our Father has created! With many wonderful and amazing people in it! God bless you Jenny!

You live in such an amazing country! While cattle are present on the roadways where I live, you get to be on the lookout for kangaroos whilst I am always looking for deer, antelope, elk, moose and bears! One thing on my bucket list is to drive around and through the entirety of Australia. I may have to take the train through the center and drive the perimeter, but I keep pouring over maps to figure out the roads to take and where I can get gas and other supplies!! It keeps me endlessly entertained as I dream of the time when I can actually do it! Thanks for sharing pictures of your jaunts around your home.

I'm so glad that the two of you had that wonderful time out, and that the Jeep behaved itself! I hope it's a long, long time before it needs anything else fixed! Thanks for sharing a little bit of Australian outback with us.

What a lovely way to spend the evening. I’m sure the fact that the Jeep went well added to your peace of mind. It is amazing how a simple experience can refresh you so much. I know we have experienced it at times too. As you say, it would be so nice if we could bottle it, but such happy times make wonderful memories to reflect on.