Today we bought a bbq.
In 17 years of marriage we've never owned one, and it was meant to be a Christmas surprise for hubby but as I'm far better at choosing fabric than bbqs I decided I'd let the secret out and have him go choose it for himself. Surprisingly I was still quite involved in the eventual purchase - it seems I do have ideas on bbqs after all!
The result of this purchase is that I didn't have to cook lunch OR dinner as hubby and son played with the new toy leaving me to sew some Christmas gifts instead. This bbq is going to come in handy...

Here are the two cushions I've designed and made for my daughter, Anita. Very soft and feminine, like her. :-) 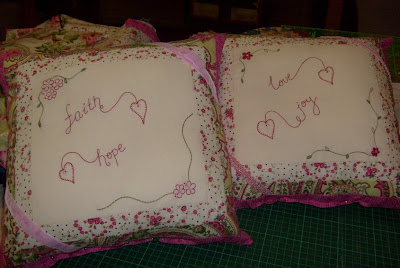 I need to do a bit of slipstitching on them and they'll be ready to post on Monday, along with the rest of the east coast gifts.
Once that's done I can start on the Christmas Day placemats that I'm way behind on, and hopefully a nice trim to some white poplin I bought as a tablecloth. Oh, and a little bag for my grandaughter, and another little bag for a friend's daughter, and those shabby chic pillows for my bed that I wanted made before Christmas - and all those other ideas that are suddenly popping up in my imagination!
I wish I had all these ideas in May....

Posted by Jennifer Reynolds Jenny of Elefantz at 11:03 PM
Email ThisBlogThis!Share to TwitterShare to FacebookShare to Pinterest

Beautiful cushions Jenny - you are amazing with all the wonderful creations you find time for! Love, Fiona xx

Lovely pillows for your daughter! 8-)

Wow!!! You have a whole mind full of things to make yet before Christmas! lol!!! Good luck with all that!