The last week was emotionally and spiritually draining for our family, most days I was unable to offer more than the most rudimentary meals and many an exclamation of "thank the Lord for Vegemite" could be heard coming from the kitchen. Fortunately none of us had much of an appetite so small snacks of sandwiches, fruit, yoghurt, and litres of milk served us well. Instant cappuccino sachets held up the caffeine needs of the adults quite well too!

As I wasn't able to concentrate on reading or scheduling homeschooling most days, I needed things that required little planning or forethought, things that I could just sit and do so that I was doing something.

Over the last couple of months I had downloaded a number of free Block of the Month embroideries (from generous designers via their blogs) that I'd either just started, was already behind on, or had not even drawn up yet. Last week these BOM's answered my prayers for something to occupy my fingers while my mind stayed on prayer.

This is the first block from Cheryl at Willowberry Designs. It's from a free BOM she is offering, called Verandah Views. I love trees, and this one is so me. 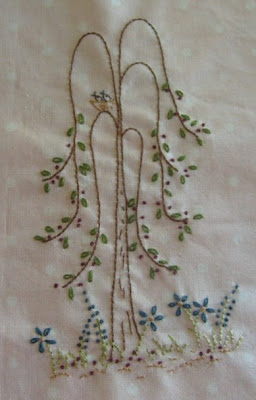 This is the second block from Esther Aliu's "Red Delicious" free BOM. I had fallen behind on this one as the fourth block is due to be shared by Esther in just 14 days and I've yet to even think about the third. I did most of this block yesterday and to day my wrist is responding with arthritic swelling, a common occurence when I applique...I love applique but it does not love my hands - however, I love this BOM so I will persevere even if it takes me longer than others to complete.

These two blocks are from Gail Pan's free BOM "A Christmas Wish". I did the top one in the colours she suggested, but I loved the design so much I decided to make another for my eldest daughter, Karen, in completely different colours with a red marbled fabric as the background. I can't wait to see the next block she designs for this quilt! 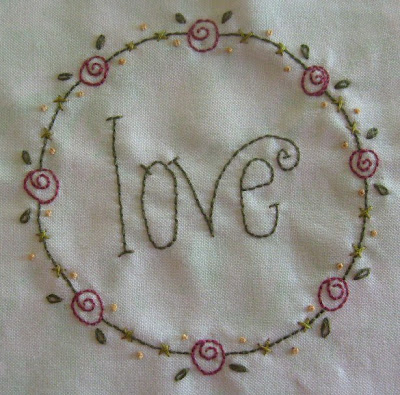 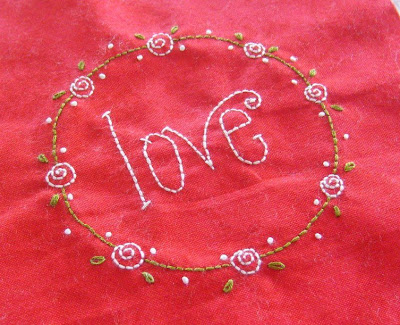 This is so close to finishing! It's Lynette Anderson's "Noah's Ark" wallhanging, another free BOM that I had been dragging my heels on, until this last week when I did all of the blocks I'd missed and finally caught up. There is only one more block to go and Lynette will probably share that this week. I have been toying with the idea of making this a book rather than a wallhanging, something the grandchildren can read from when they come to visit, and an heirloom that can be passed down in years to come...but I'm still making my mind up. 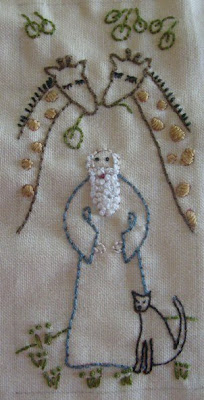 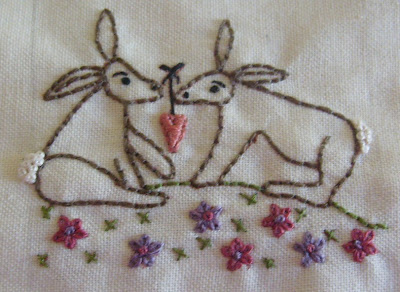 Lynette released most of the blocks for this in 2008, but I did not start until January this year so mine is dated 2009. This little bug block is so cute. 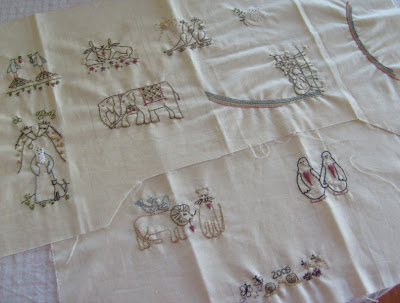 Today after Mass I made real food the family (great expressions of delight were finally heard!) and after I press 'publish post' on this blog entry I am going to begin the first block from Bea at Capricorn Quilts. It's a fairytale quilt and I think I'll make it for a grandaughter....

God bless you all!
Jenny

Posted by Jennifer Reynolds Jenny of Elefantz at 2:33 PM
Email ThisBlogThis!Share to TwitterShare to FacebookShare to Pinterest

Jenny, so sorry to hear you have had a hard week. It takes so much to get us back on the swing when we fall, little steps, little steps! Big hugs and hoping things get better, may lots of smiles, sunshie and smiles come your way.

Hi Jenny, Your fingers have been soooooo busy stitching - and what beautiful stitches you create! I usually find peace when I undertake therapy in the shape of needle and thread :-)
thanks for sharing,
Cheryl

How nice stitching you have done! It is good to work with something like that when life is hard. November 2 years ago my husband was at the hospital with a heart disease and we didn't know how it would go. I was sitting by his bed stitching on a stitchery with the words "All hearts come home for Christmas", and thanks God, he did come home for Christmas.
Blessings for you!

Jenny, so sorry to hear you been through a hard week.
it's nice at times to just sit quietly and stitch...it's healing and hope things are better now..
Julia ♥

You sure have done a lot of stitching lately! Did you enjoy the tennis finals? Did your favorite people win? I love that Rafael Nadal, he is so cute, (even for an old gal like me!) My heart did go out to Roger, I always want him to win unless he is playing Nadal... you just wanted to go hug him and tell him it's okay...such pressure I don't think is good, why couldn't they both win? Okay, enough of that. Keep sewing!

You are so blessed with such a great gift - not only are you excellent at this stitching and creating, but you are inspiring me to crack open my learning book to start stitching! With any luck, I'll post results later this week or next. It won't be anything near your talent, but an effort is an effort, yeah?

Keeping you all in my continuous prayers.

What a lovely job you've done with Nightshade. I love seeing how each quilter makes each block their own. Beautiful! and it will be even more beautiful handing 'down'. It will all make sense at the end of the mystery.

Thank you for your comments on my blog, they always give me a moment to pause and think. I appreciate them so much.