About fussy cutting and neat joins on your squares...

One of the projects in the October 4th 'Bumper Christmas Issue' of Elefantz Home e-zine is the "Starlight" table runner, and throughout the applique and piecing of this pattern, I have been fussy cutting.
'Fussy cutting', for those who haven't heard the term before, is to use a specific pattern or motif on a piece of fabric as a feature of your project.

This is the main fabric I've used. It has a lot of interesting patterns that I can utilise to bring balance to the appliques, blocks and border... 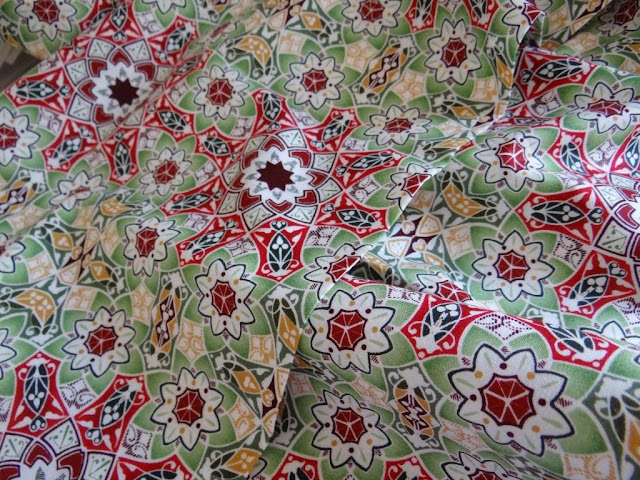 It's featured in the tree base, and also in the small star centres... 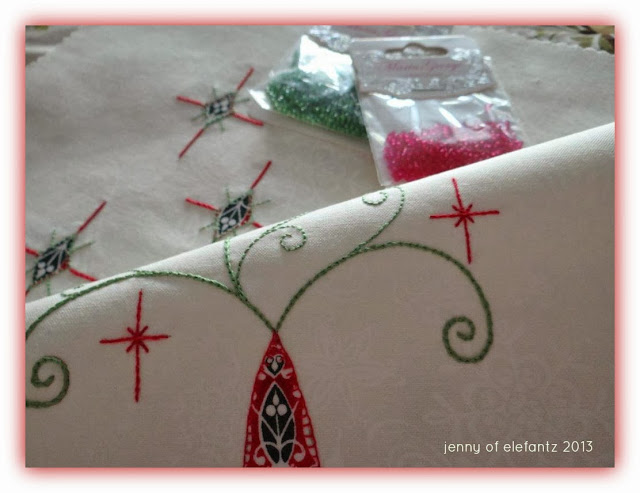 ...but I especially loved using the larger geometric patterns in eight of the sixteen 2.5" blocks that make up the centre section of the table runner, as well as two side panels bordering those squares. 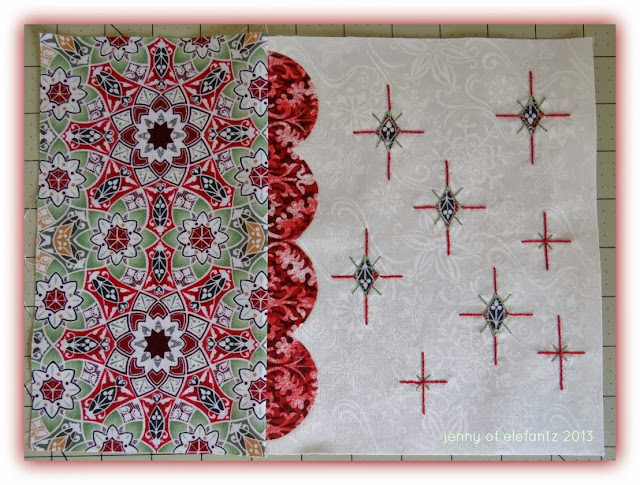 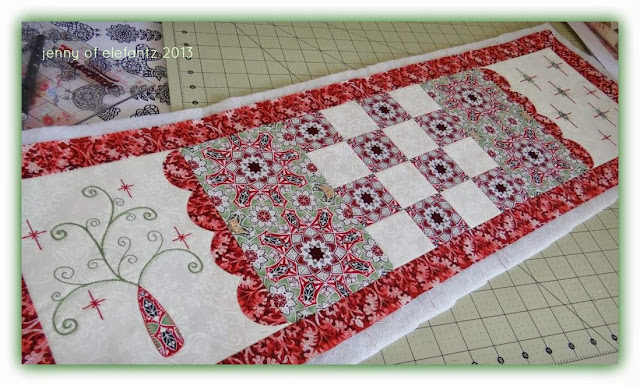 When I began stitching and quilting in 2005, I didn't have internet at the time. I relied on magazines for patterns, and had to fumble through a lot of basic techniques with no-one to teach me 'how'. That's why when I have time now, I enjoy sharing tutorials here on my blog - just in case someone needs help to learn a few basics in their quilting and stitching journey too.

So today as I was piecing this table runner I thought I'd mention the fussy cutting, and then show you a fairly easy way to get nice joins when sewing squares together.

The centre section of this runner is a 16-patch block. That means it is 4 squares x 4 squares - all of equal size. To get that checkerboard look, I cut eight cream tonal blocks, and eight 'fussy-cut' blocks.
Sew one fussy-cut block to one cream block eight times, to give you eight sets of two.
Press the seams on all eight sets in the same direction... 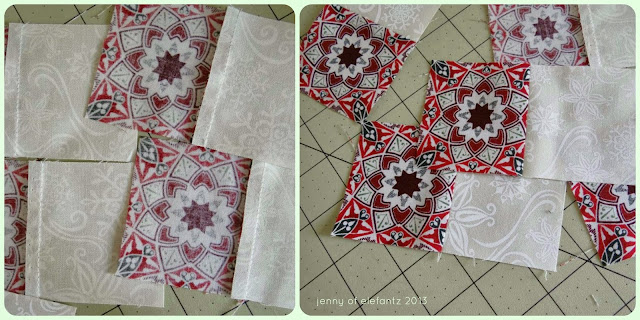 Join two sets together, and now you have four strips of four blocks. See how all the seams face the same direction? That's important for the next step... 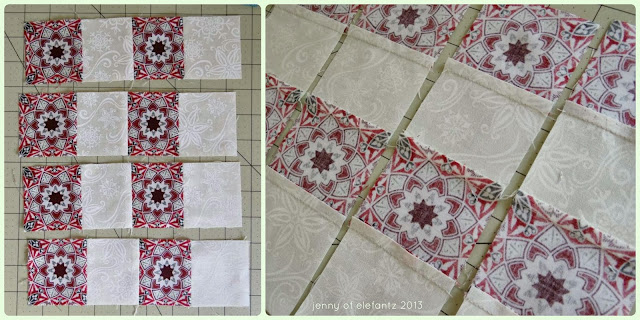 Switch two rows around, and you have the checkerboard layout. Now if you look at the back, one row has seams facing one way, and the next row has seams facing opposite.
This is to reduce bulk in those corners when you sew all four rows together - it makes such a difference to the finished project, as well as making the machine piecing smooth, and not frustrating, work. 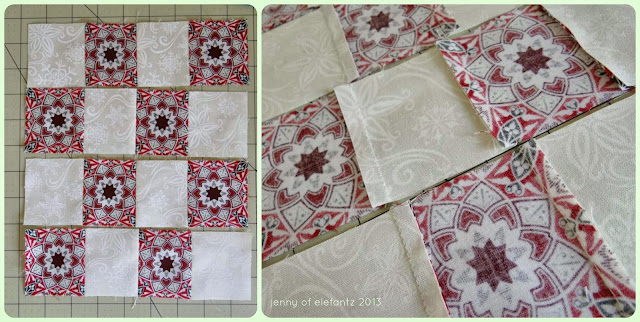 Sew two rows together first.
As you lay one row on top of the other, peel the top row back a little and  make sure all the seams between the squares on the bottom row line up with the top row before you sew them together.
(It looks like the one on the right doesn't match up but it's the angle of the camera)
Pin, press, check once more, and then sew... 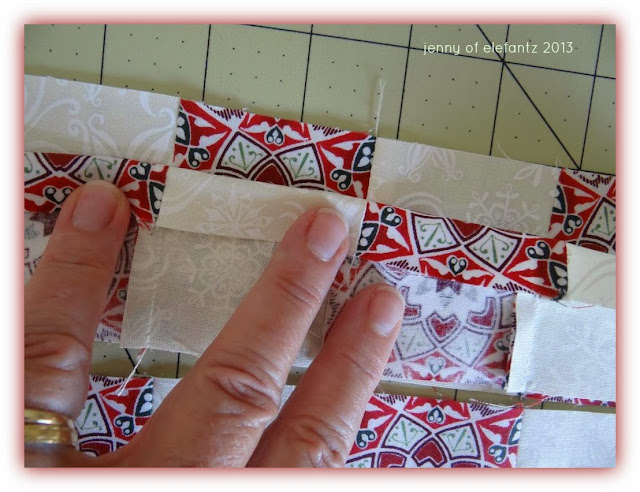 Sew all four rows together and you've made a 16-patch block! 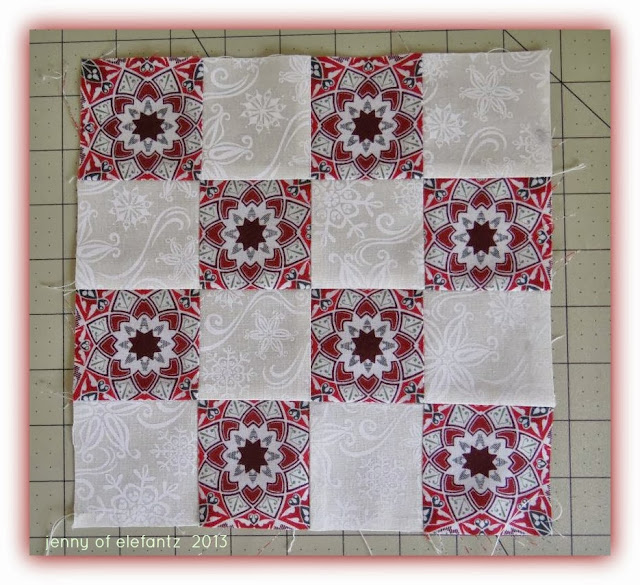 The runner top is completed now, and I've also finished the machine quilting. All that's left is the binding to attach... 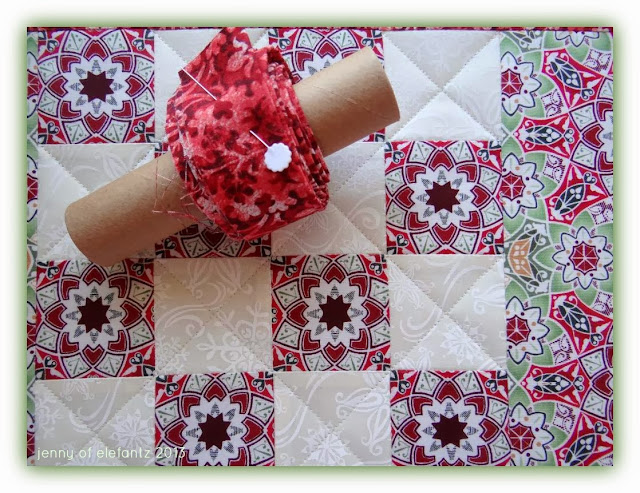 I think I might watch an episode of Father Brown Mysteries whilst I do that. Do you have a favourite tv series you like to watch while you stitch?

Oh, in case you wanted to know the name of the fabrics I've used, here they are... 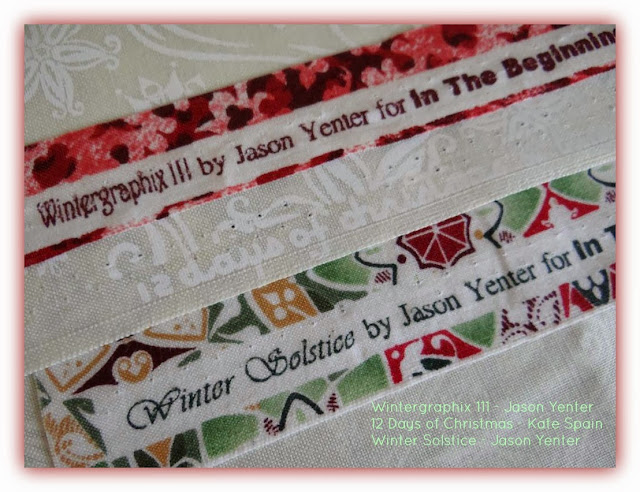 Just beautiful. Thank you for the tips on pieceing today.

Good morning, Jenny. This is very pretty. I like the fussy cut blocks. The fabric looks entirely different when cut and put into blocks like this.
A lady taught me a new trick (new to me anyway) that has been very helpful to me. When lining up your seams, use a glue stick. Just add a bit of glue, line up your seams, and press them together with your fingers. The glue holds them there until you sew over them and they always match. This tip helped me finish a quilt top that I had so much trouble with. Have a great day.

Lovely table runner Jenny. It is so different!

Oh, I have to look for a Christmas fabric I like for the fussy cut part! This is going to be great!

Jenny that is beautiful. I love the fussy cut look who have used here .. gives a real sense of balance to the block. Many thanks for the smashing tutorials and photo's - I am still learning to embroider ... it is early days for me. Thanks also for the brilliant magazine ... I've had two issues now. They are worth every penny!

What a beautiful creation!

I love to fussy cut when I can, it definitely makes a difference. Thanks for the tutorial. Hugs....

Beautiful runner and thanks for the the great tips in the tutorial!

Jenny I always love how you word & picture your tutorials, and posts like this... so easy to read & understand, and the pics really give such good info in themselves. Thank You !

Thank you Jenny for the tutorial and a look at your gorgeous table-runner....I'm going to have a rummage through my stash to see what I can fussy cut.
Kind regards,
Sue

That is a gorgeous runner! I have some of the Yenter Wintergraphix and Solstice too and love his fabrics! Cool tutorial!

what a beautiful table runner! Thank you for your inspiration!

I hope you have yards and yards of that fabric, Jenny, because there are so many fussy cuts available in it!