It's that week in the month when I share a tutorial for using one of the ten Rosedaisy Designs I released recently. My choice for July is the "Friend" block... 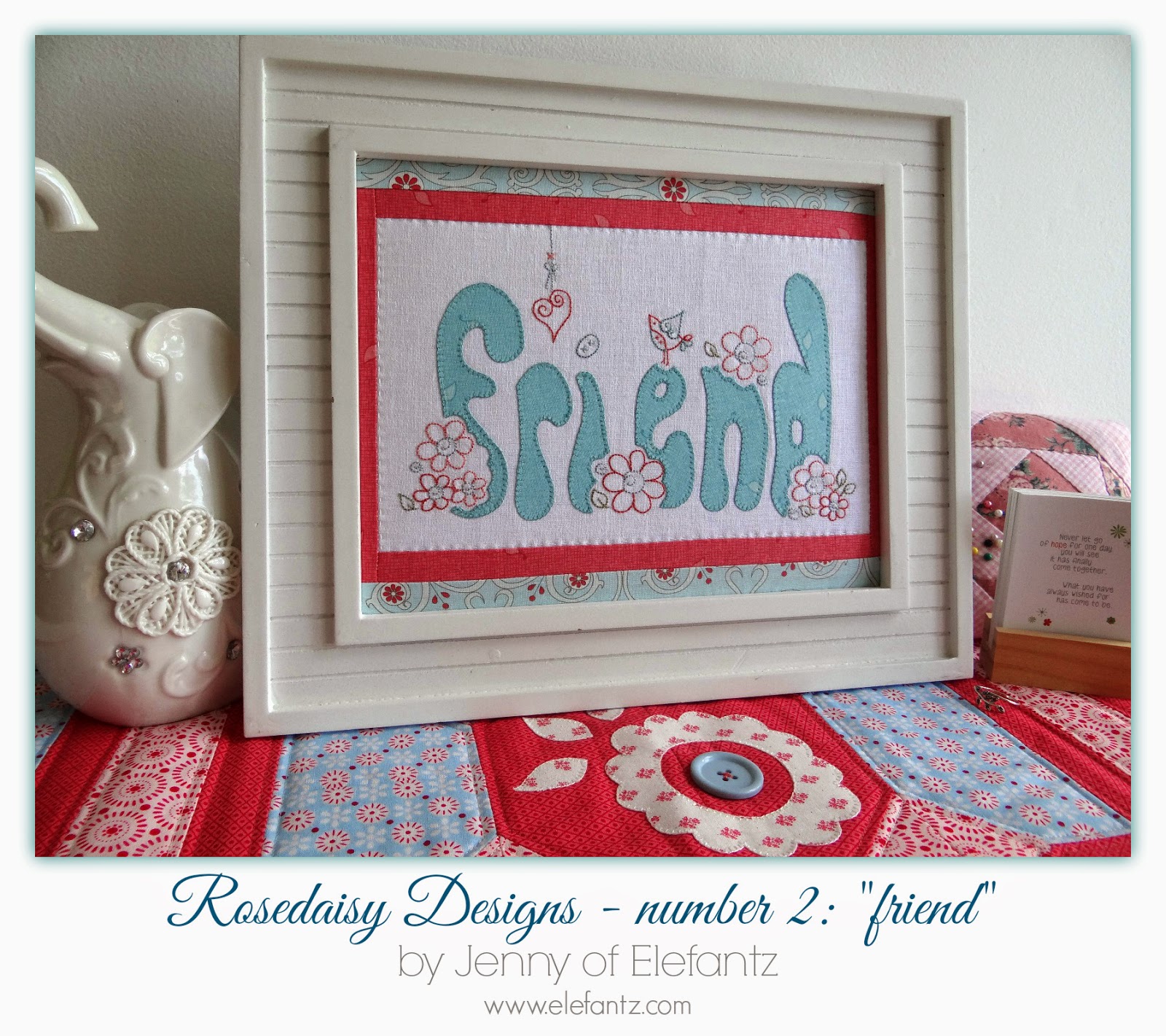 I chose to border the 'Friend" block using fabric which allowed the design to shine by giving it contrast, and finished the display with a white wooden frame that was quite distinctive and yet didn't overpower the stitchery. I think my design, the fabric (Primrose Sands) and the frame (from Target) all worked beautifully together! 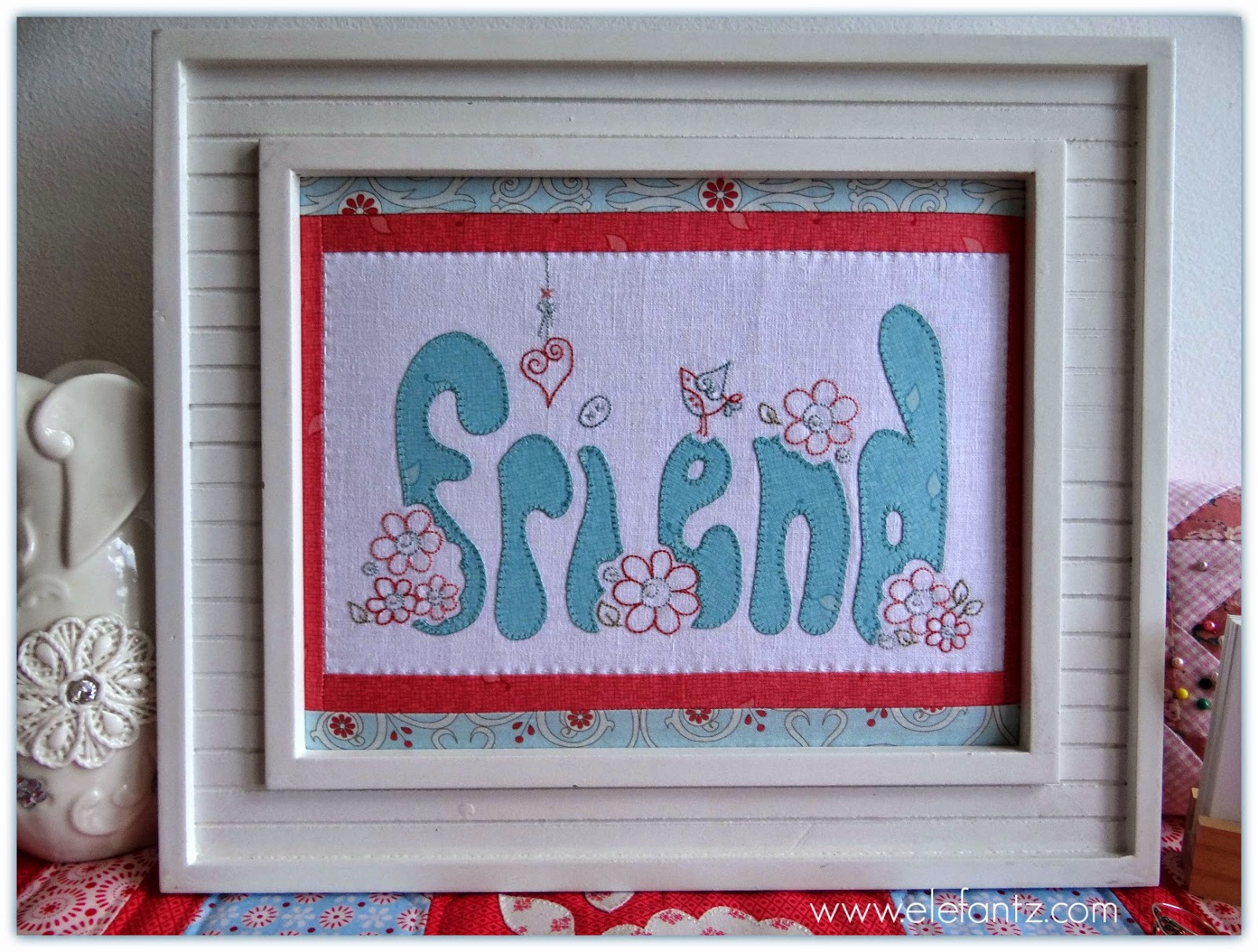 Now, I'm going to do double duty on this blog post because I want to share a second framing tutorial... 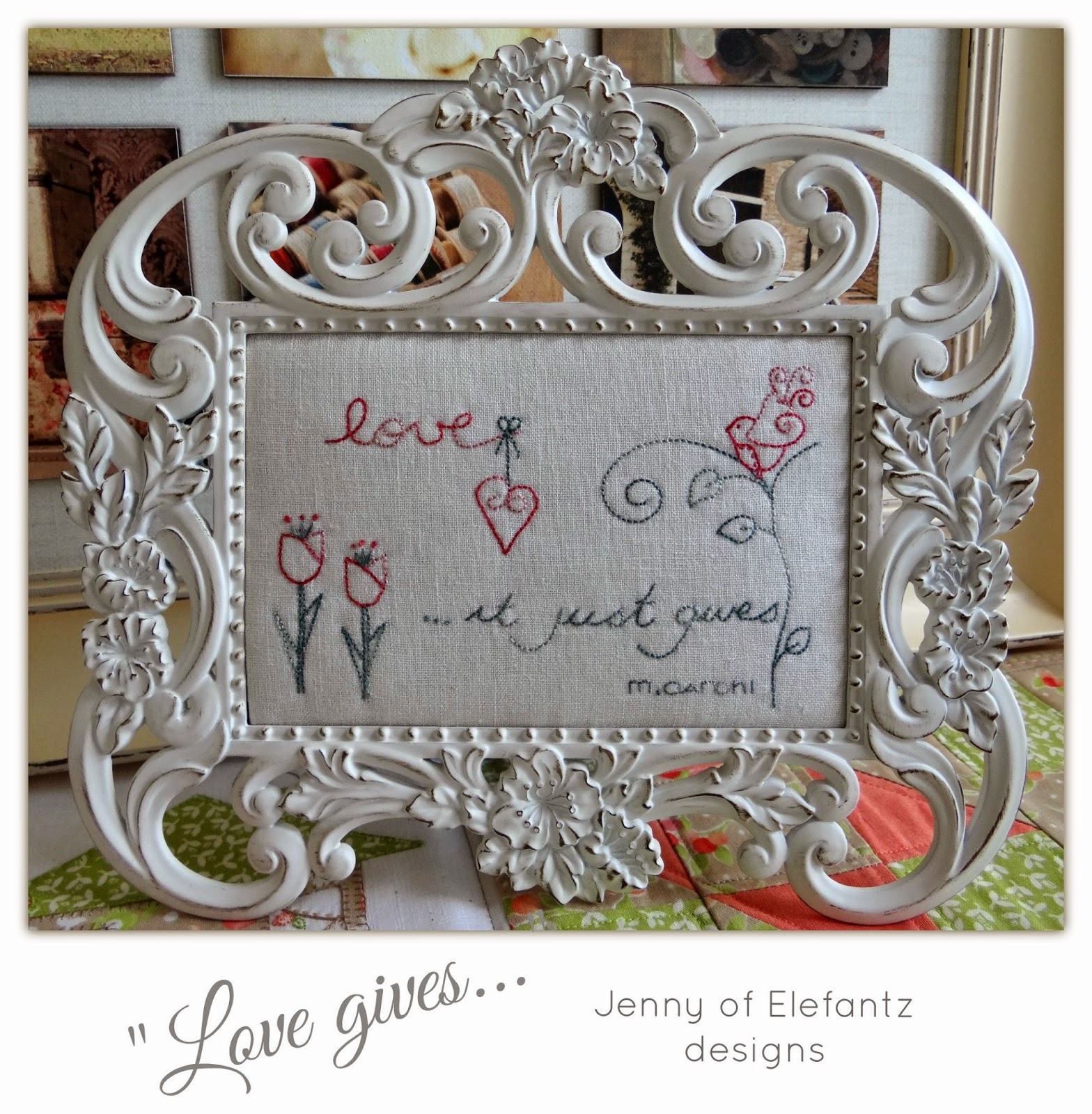 This tutorial works with any block you have stitched that you'd like to display in a frame. When I prepare an embroidery design ready to stitch it's always a few inches larger than the size of the actual design area, so if you are not intending to add a border around your block be sure to cut your fabric at least 4" larger than the design - for example, a 5" x 7" design would require a 9" x 11" piece of fabric.

I designed my new stitchery, Love Gives, to fit inside an ornate metal lacework frame I'd purchased a few months back.
The frame was marked to fit a 4" x 6" photo, but when framing an embroidery it's important to note that the aperture of the frame (the area of frame that is seen when a photo or stitchery is placed inside) is usually always a quarter inch smaller.
This meant that the useable area I had in this particular frame was 3 3/4" x 5 3/4".
(When I displayed "Friend" in an 8" x 10" frame I had 7 3/4" x 9 3/4" of useable area)

For a 'whole cloth' display:
After I traced the design onto my fabric I measured the size of the aperture in my frame, before fusing a piece of Parlan the same size behind the design. After the design was embroidered the process of framing could be started:

Fold a small hem around the raw edges and sew in place... 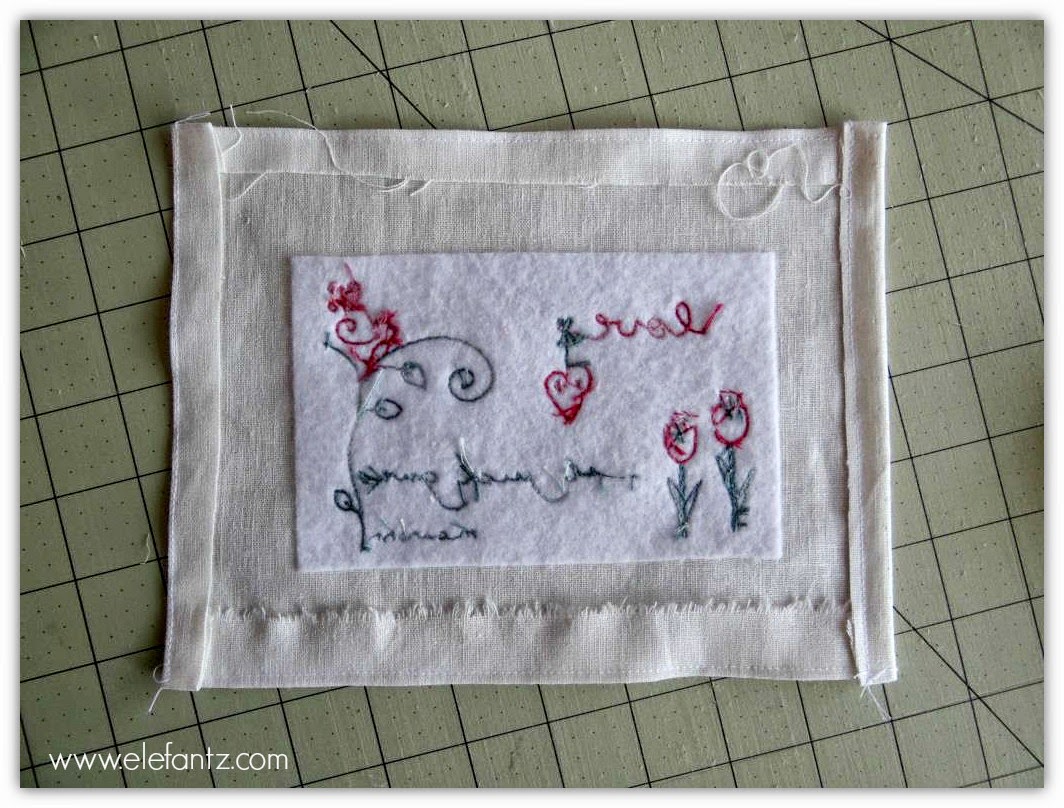 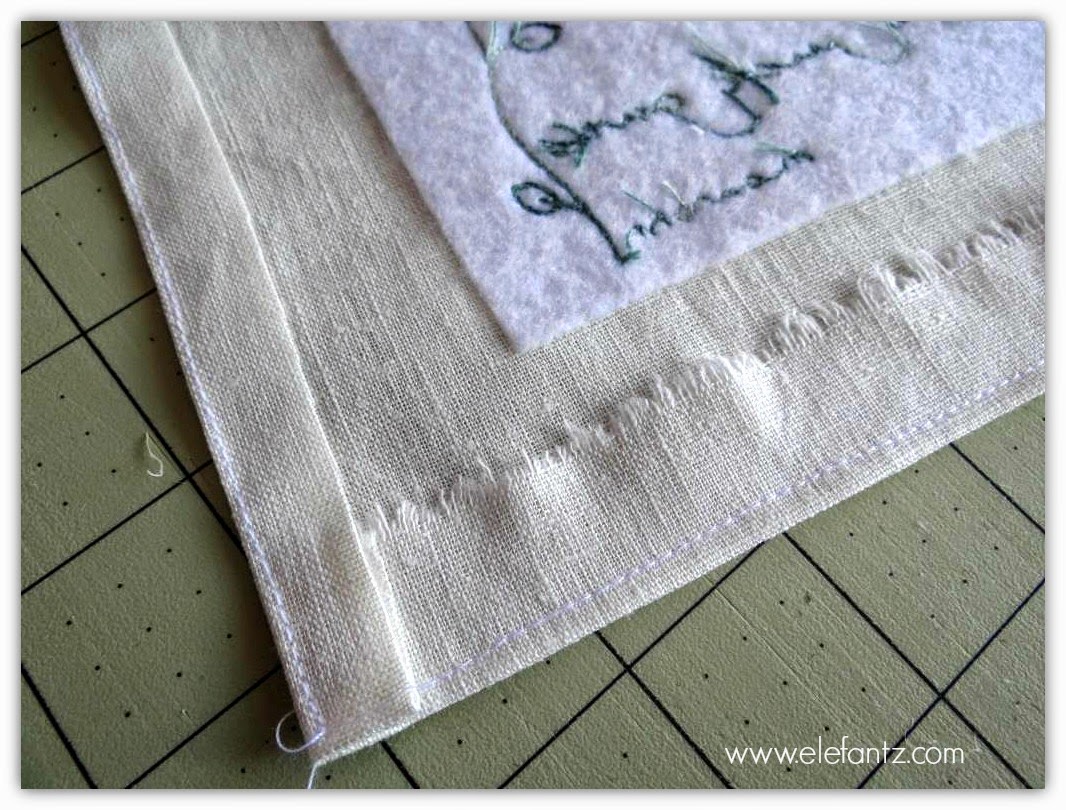 Cut a piece of medium weight cardboard the same size as the glass in your frame.
Dispose of the glass carefully afterwards.
Lay it over the back of your stitchery and centre it... 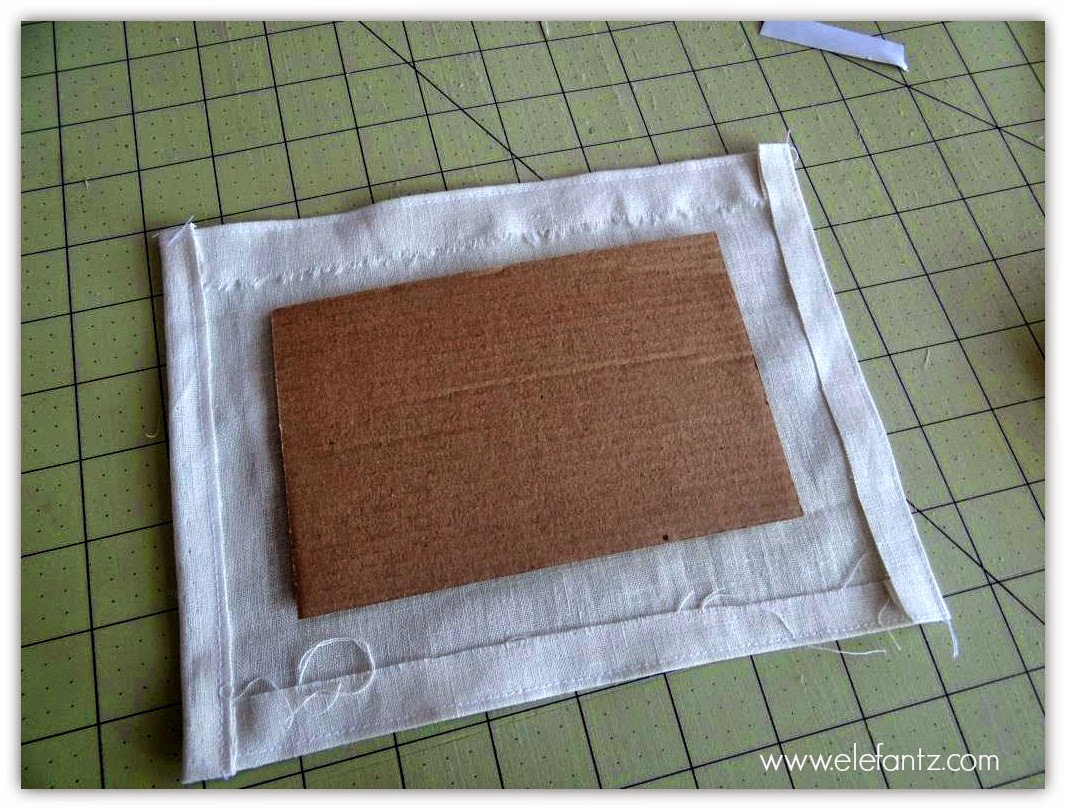 You will now need some sturdy thread or thin string. I've used Perle #12 thread from my stash... 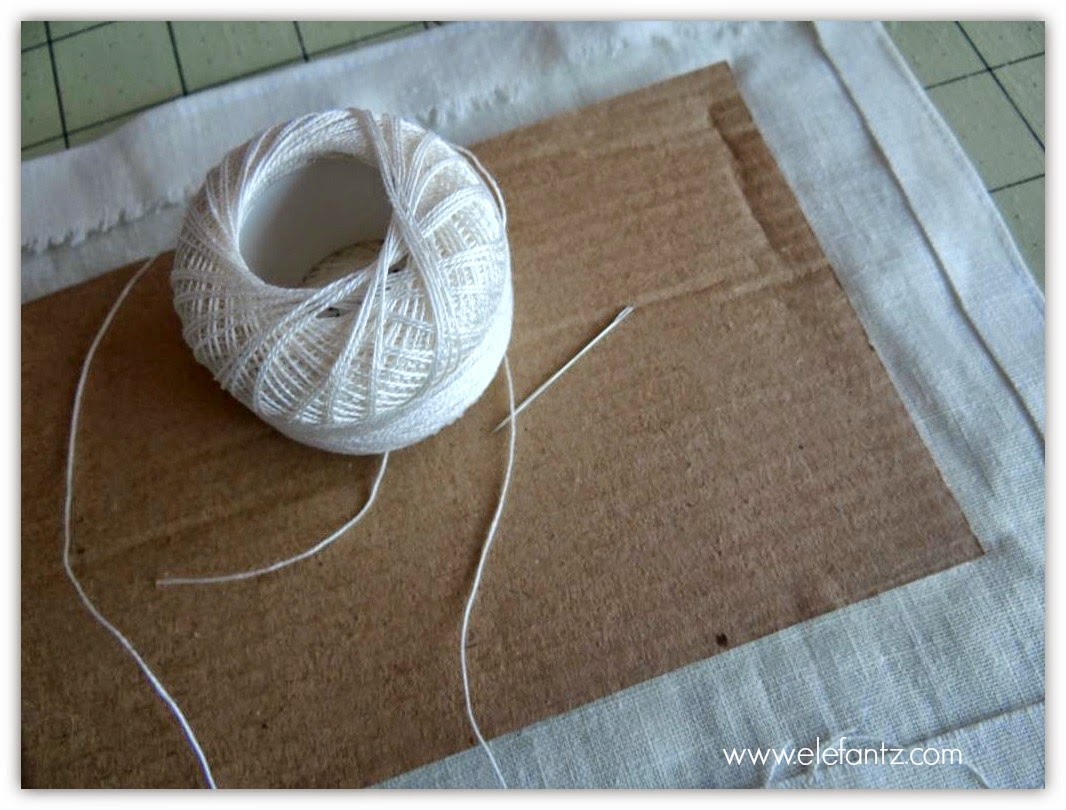 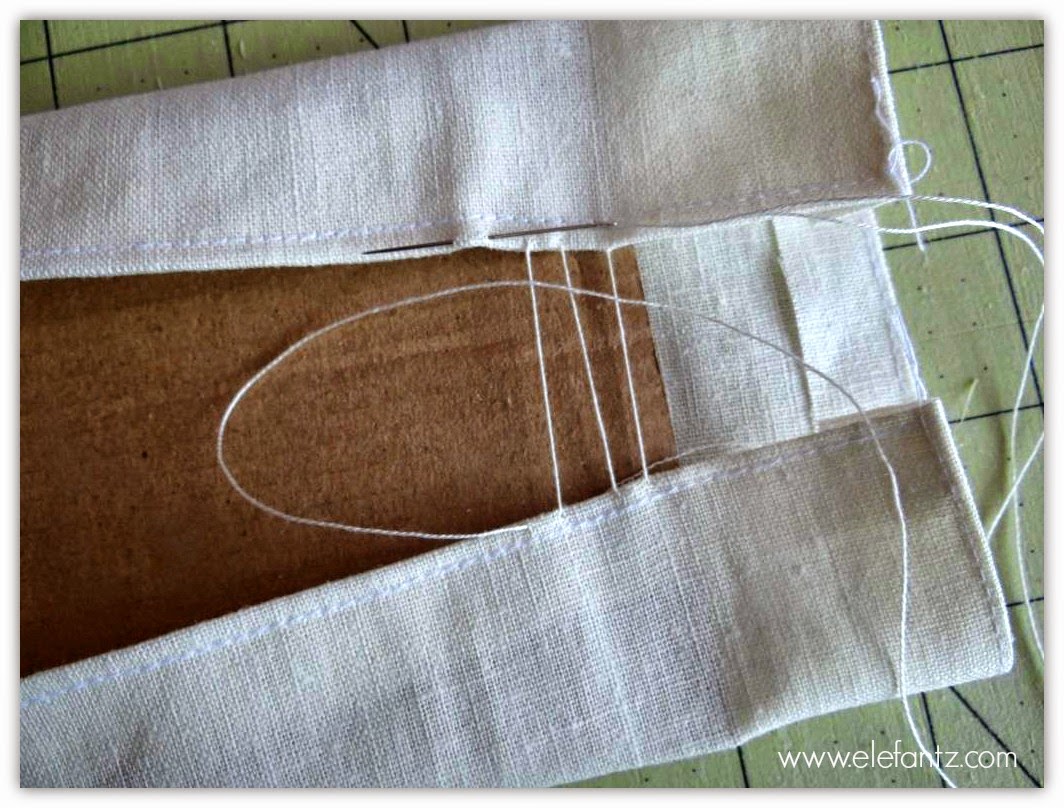 Don't pull so hard that you bend the cardboard, just enough that it is snug. You may have to tie off the thread and start with a fresh length one or two times as this technique uses a fair amount... 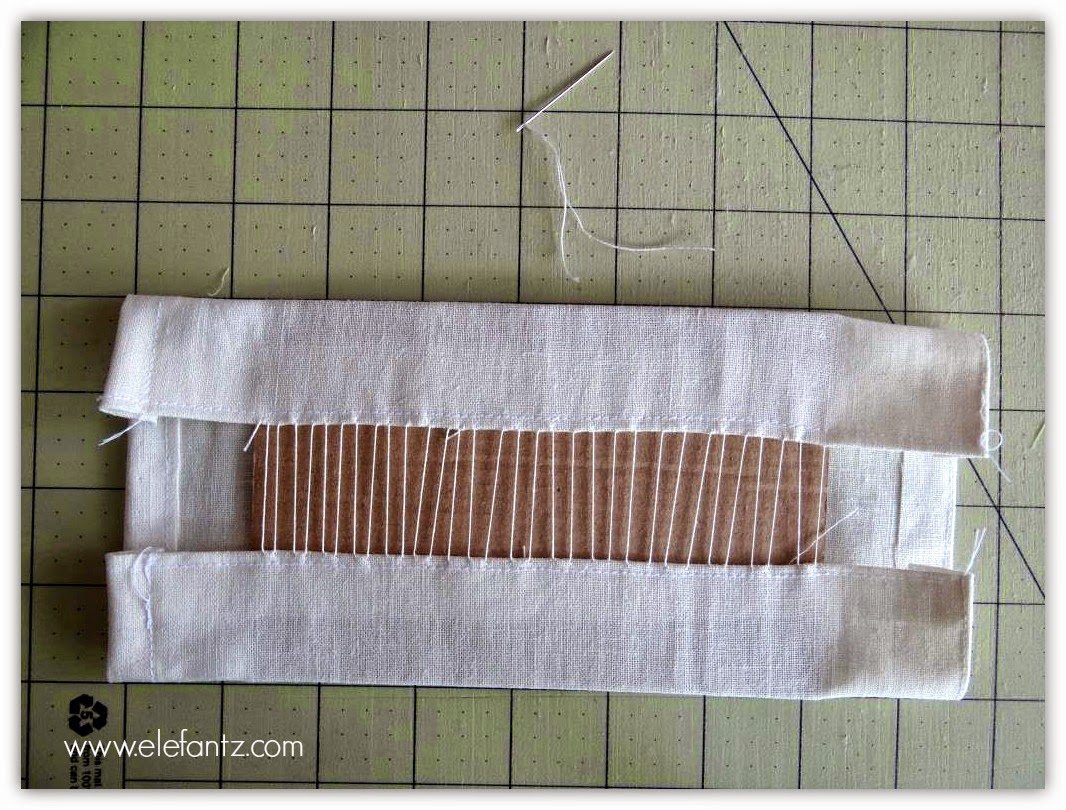 Turn your stitchery around and begin the lacing from the narrow sides.
Now because these narrower ends have more bulk, from the double hem when folded, they can slide a little and distort the finished appearance, so lace the left side first, leave the centre open, and lace the right side next... 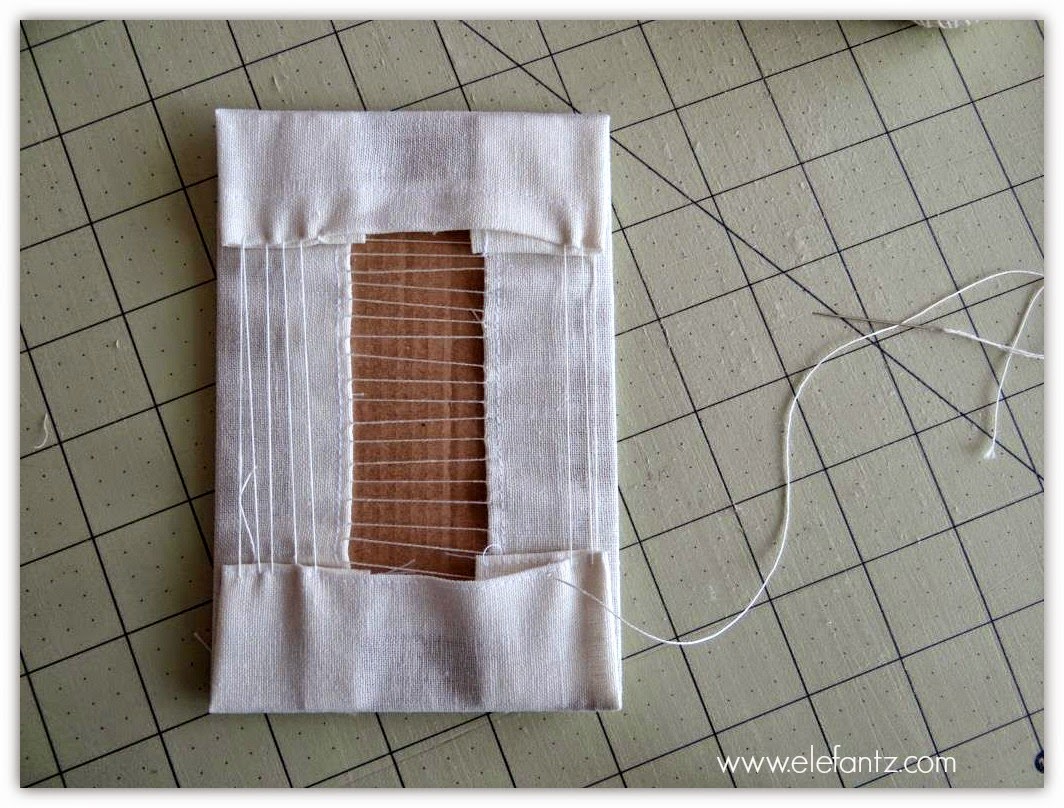 Finish by lacing the middle last... 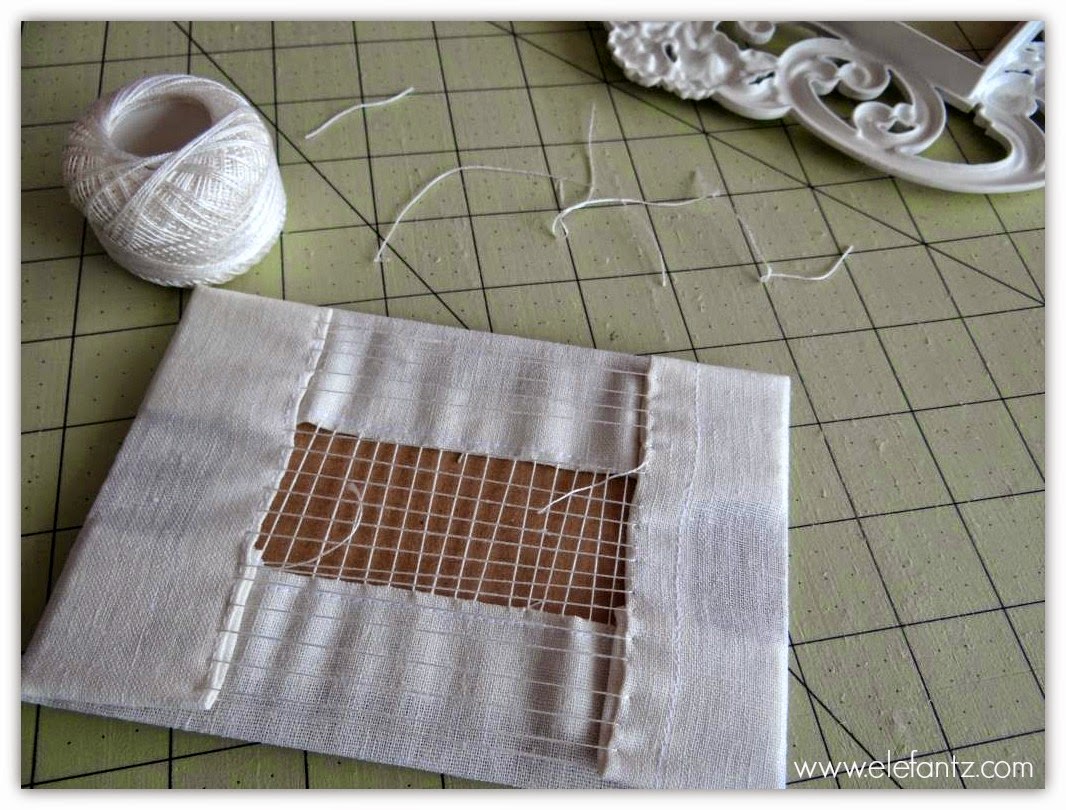 Place your prepared embroidery inside the frame... 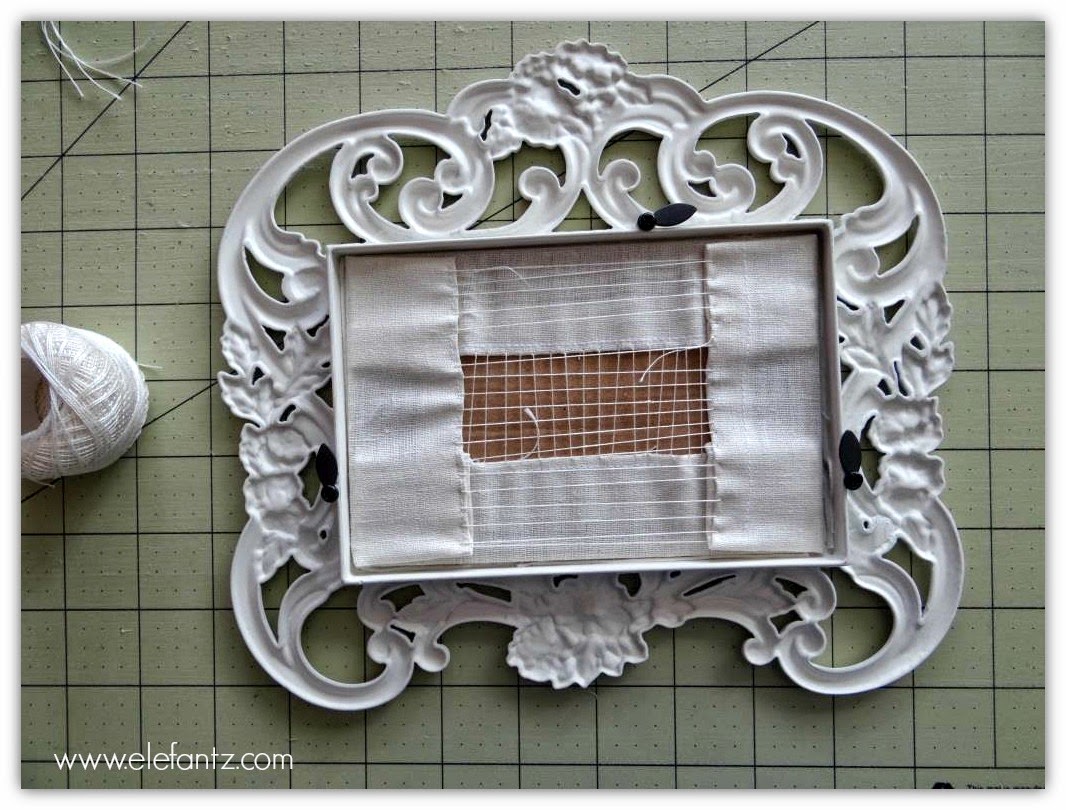 ...and replace the frame backing.
Beautiful! 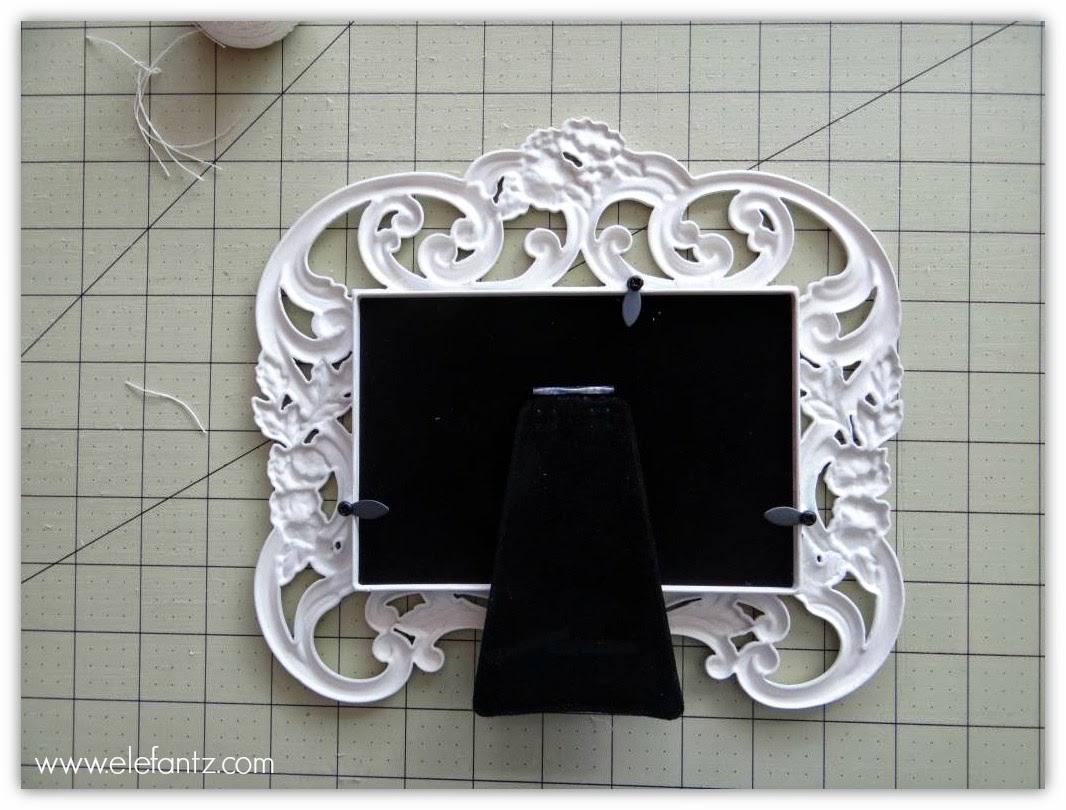 Now for a "bordered" display:

When framing "Friend" I added borders, so I trimmed the block to 6 1/2" x 9 1/2"  after stitching.
To save on feature fabric I only used the amount that would be seen through the aperture plus an extra 1/2 inch - then I sewed white homespun around all four sides as this would be hidden afterwards... 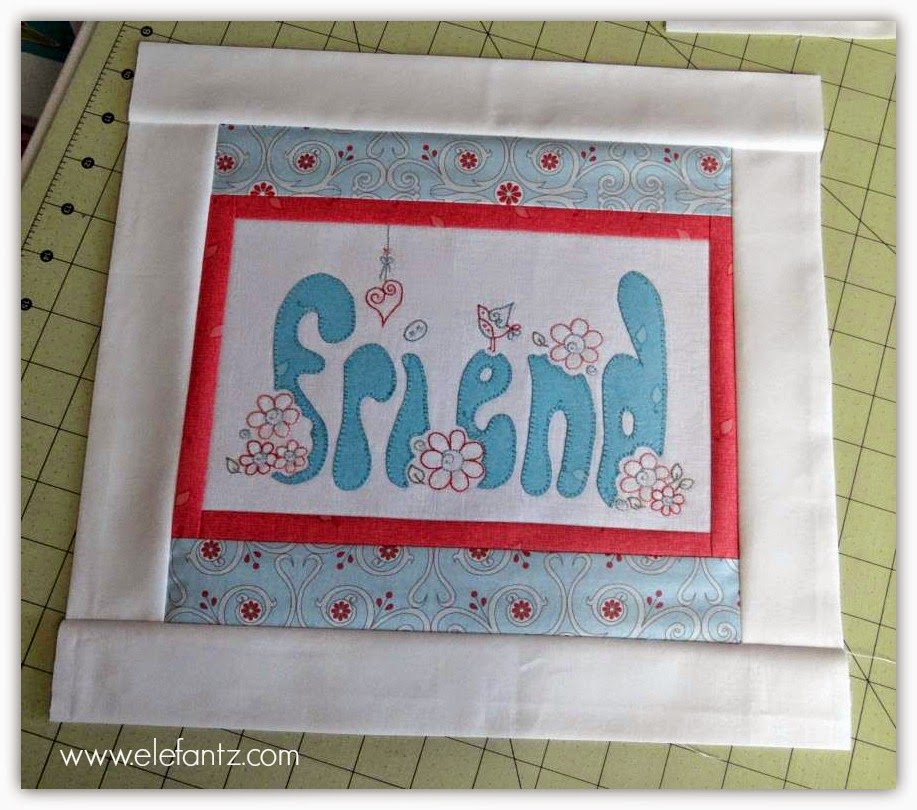 I fused some thin Pellon, the same size as the frame aperture, behind the block, and then hand sewed a row of running stitch around the white edge of the design just inside the pink border... 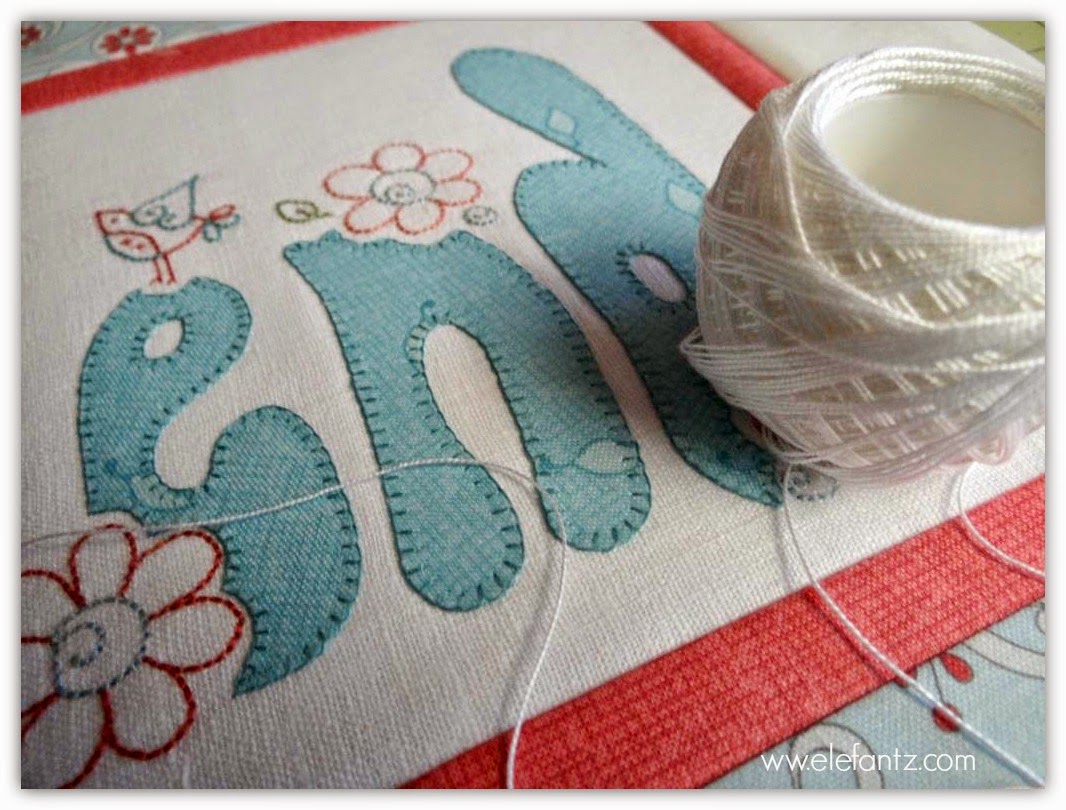 To show another finish for framing your work I quickly put this one together with masking tape.
This requires no tutorial, as you can see that the edges are simply taped down onto the cardboard instead of being laced. 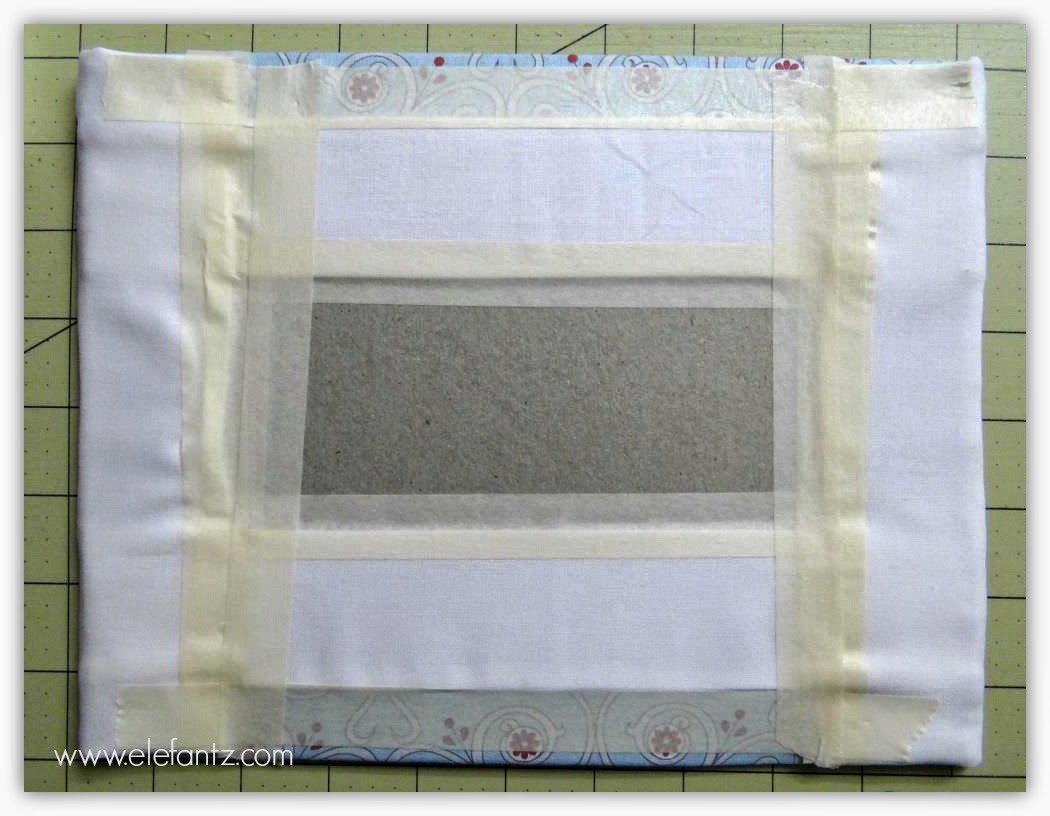 I do prefer the laced method as it gives a lovely snug fit to the block, but it's best used if this framing is a permanent display.
However, if you regularly switch designs around in a particular frame, the masking tape technique would be the easiest and least destructive to the borders as you don't have to remove the cord laces from the back.

Which framing method do you think you would use?

The pattern for "Love Gives" is available as an instant download here in my shop.
Enjoy!

Just beautiful Jenny - thank you SO much - I can now stop spending big money on paying the framers to frame my stitcheries for me :-)
I just love all your white frames & the colours you use in your decorating, such a fresh clean look, its gorgeous.

Thank you so much Jenny, this is great and thank you for easy to follow and love the designs, will be using both, just had a quick peak so back to my 70 gift making, found a shirred velvet covered coathanger I had almost completed so another item to finish tonight, will embroider some flowers and making a hanging contrasting doily lavender bag to hang from it, on a roll I am, not many days free to get all done, so many options to make too. Hope you have great day. Judithann :-)

hi jenny how gorgeous are you to share your talents with us and also to give with love your free stitching design,thankyou my my lovely friend for being the kind loving person that you are,enjoy your day.xx

I love your tutorials. They are always so clear and easy to follow. Thank you so much for all you so generously share with us.

Jenny,
Thank you for the free Love sampler. We are learning about; not just learning about God's great love for us in our minds, but feeling it in our hearts, in our Companions in Christ study. This just fit so nicely in this weeks lesson. I have found so many of your postings helpful in my spiritual journey, I truly believe you are a mentor for God.
I am trying to get my supplies together so I can start my Lord's prayer. Thank you so very much.
Faith in TX

Thank you for showing us how to do that. I was wondering about it. As I have a design that needs framing. ANd thank you for the cute new design as well.

Thank you... now to pick the frame for my Fall Stitchery... it will be entered in out Sept. Guild Show, too.

Another great tutorial Jenny! I'm always sending my stuff away to be framed.....actually have a few pieces lazing around nunframed because of the costs! But guess I can have a tackle at this myself :)

I love the way you picked your frame first and then designed your work considering it's size. Too often we have to find a frame to fit and most embroidery doesn't fit standard size frames. I like the way you finished the edges in preparation for sewing them together. I always zigzag the edges before embroidering to prevent fraying, but now I will do it the way you sewed it together on the back. I would suggest that you use "museum quality" (museum board) backing that is made from fabrics, probably rags, rather than regular cardboard as it is a better quality and will probably last longer. I recently re-framed some work my mother had done over 30 years ago. I would avoid using masking tape if you can, while it is better than most tapes it eventually dries and falls off so your sewing method is better. You might try double stick tape. Thanks, Rosemary

It is very beautiful....thank you