Way back in 2009 (the inaugural year of my design adventure) we had just moved 7,000 kilometres north-east from the cool and remote ocean-side town of Esperance to the very hot outback country town of Charters Towers.
Even though we arrived in winter, heat shock knocked the wind out of us for a long time.
We learned that our new winter was warmer than our old summer and even now, into our seventh year up this way, we still find ourselves gasping for cool air much of the time.
Secluded in the air conditioning for much of that first year it was relatively easy to design and create as I was new to it and the distraction of stitching and sewing helped the days pass.

Always one to finish what I'd begun there was never much of a UFO pile, so I decided to begin a 'work in progress' quilt and not give myself an end date, although I did have high hopes of seeing it made within a few months.

The quilt was to be made of churn dash blocks with a solid white background and fit our queen size bed. I had been gathering some vintage style fabrics for about a year and used those to make a start. The plan was to sew two blocks every day. Ha ha ha!! My friends, that never happened.

Here we are in 2016 and my little pile of vintage style churn dash blocks live hidden away in a pretty pink box waiting to be remembered and I never do. Isn't that sad?? 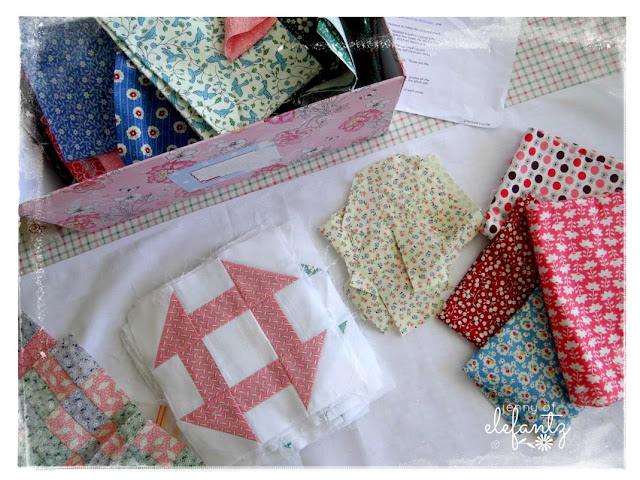 I was making larger churn dash blocks from my Flower Sugar stash for a friend over the weekend and that's when I remembered my dream for these pretty vintage blocks so I unearthed them from their hiding storage space to admire and croon over their simple elegance... 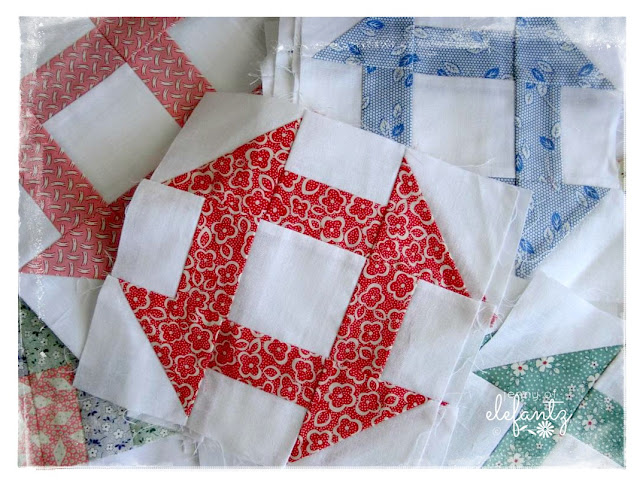 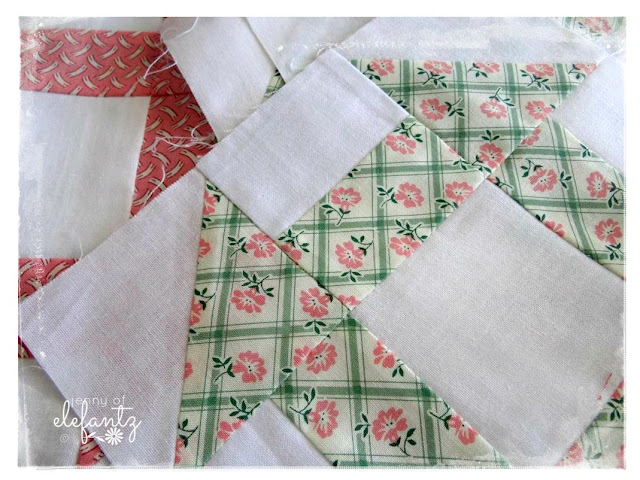 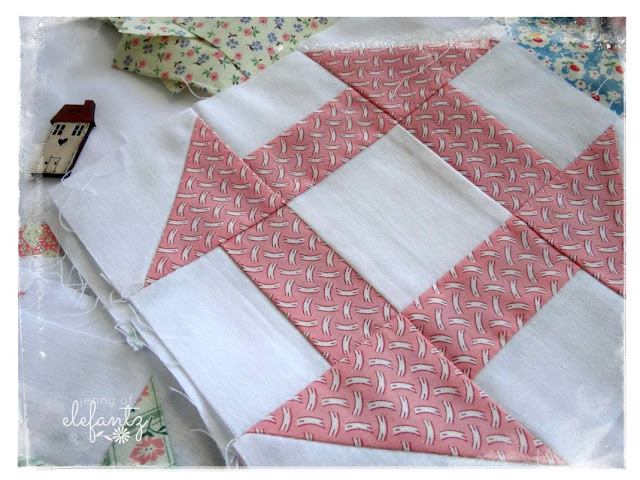 A funny thing happened while I was pulling out the blocks and fabrics I'd stored with them. I noticed there wasn't a single yellow block made so far and the only 'yellowy' print I could find was this one which is more of a washed out lemon I suppose. 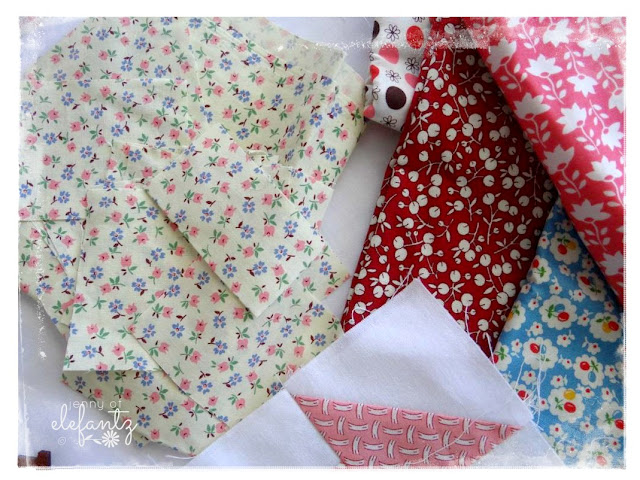 Now if you've read this blog post from last month you will agree I must right this wrong when I continue making more of the blocks.

Under the material and previously pieced churn dash blocks I found two partially patch-worked squares of the vintage fabrics... 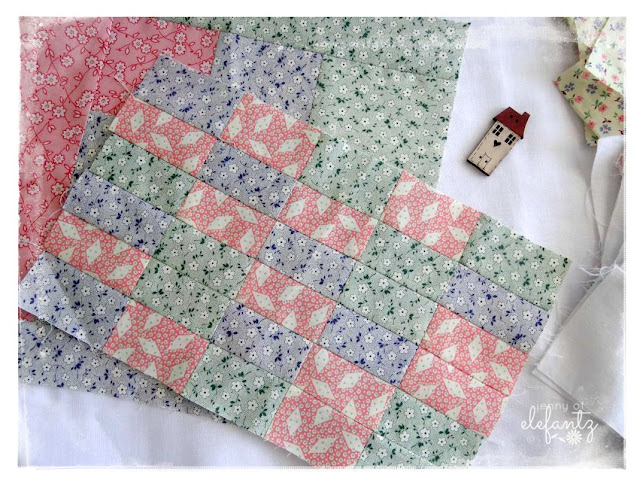 ...and really needed to put my thinking cap on so I could jog my memory as to why I had them.
Then, the lightbulb moment.

Way back in 2009 when we first moved up north and I was just starting to design (yes, we're back to the beginning again)  my daughter Blossom who was 15 at the time, was also dabbling in a few designs of her own.
Long time readers of my blog know that Blossom's dream has never been career oriented, but purely focused on one day being a wife and mother - so it's no surprise that her designs had a soft side, a gentle side, an essence of child-like innocence. 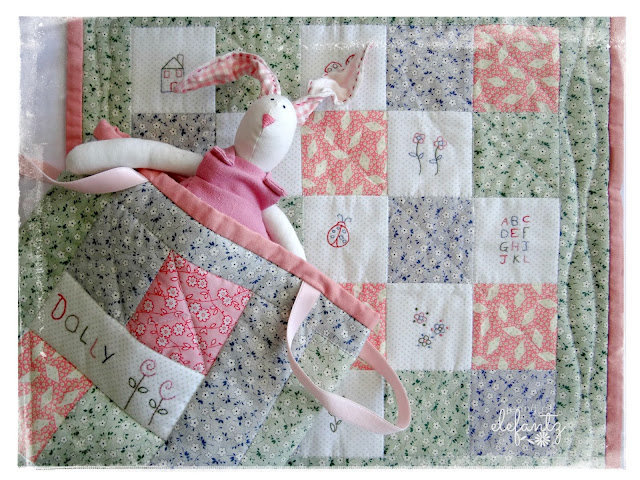 She drew up a set of tiny little motifs on pale pindot fabric, stitched them over a weekend, and handed them to me with a "Maybe you can do something with them, Mummy?"

Blossom had chosen vintage fabrics from my box of churn dash prints as thread colour inspiration so we already had the materials on hand.
I ran the idea of a simple doll quilt and bag by her and she was thrilled.
So that's what I made from her deliciously delightful stitcheries. 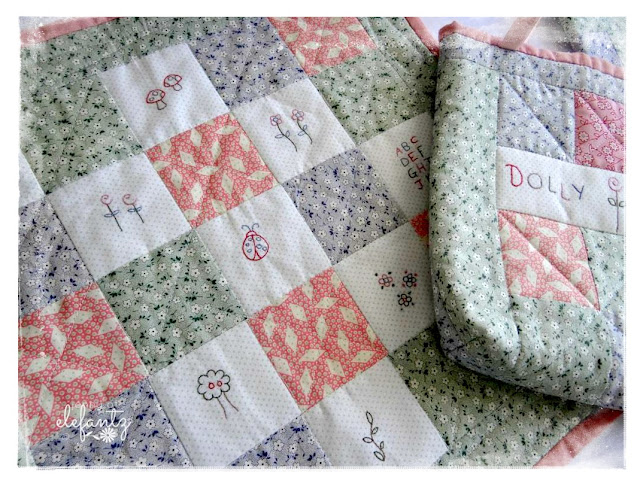 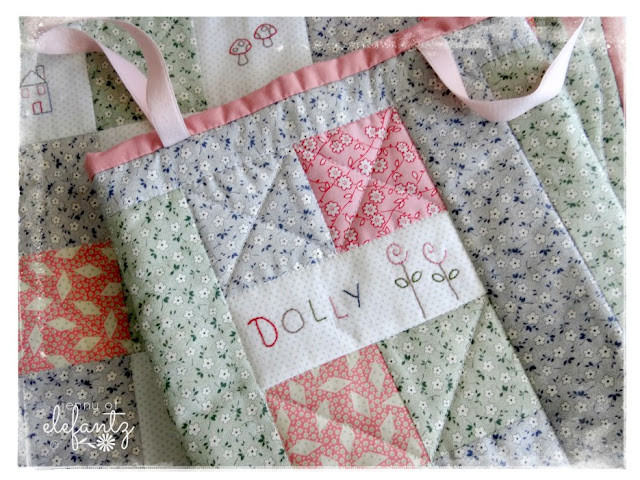 The little quilt folds to slip inside the bag and there is still room for dolly too. 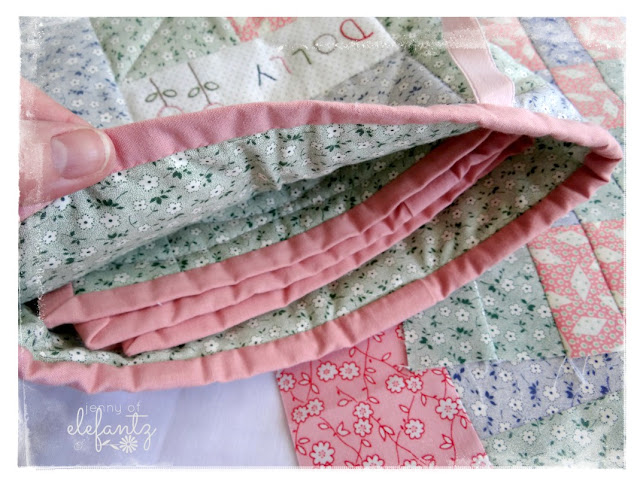 After a few more designs my girl moved on to other things but she's thinking of using her skills again in the future because she's finishing up at her telecommunications job next week and setting up a workspace in an office under my house.
You see she is 16 weeks along in her first pregnancy and found her scoliosis made long hours in front of a computer perched on an office chair extremely painful in her job, so she could not continue any longer.

Over the weekend she made another change when her and and BB (Blossom's Beloved) moved into the cutest little cottage just a few streets from Mr E and I. Now she'll be able to do a few hours each day from either of our homes working on her ideas and resting whenever she needs to.

I thought this would be a wonderful time to release Blossom's "Vintage Simplicity" pattern in my shop.
It's such a sweet pattern and makes up very quickly, so you might like to make it for a little girl in your life?
Actually, it would be a good pattern for teaching a young lady how to sew backstitch and do patchwork!

All 'Blossom Designs" sales will go directly to her... 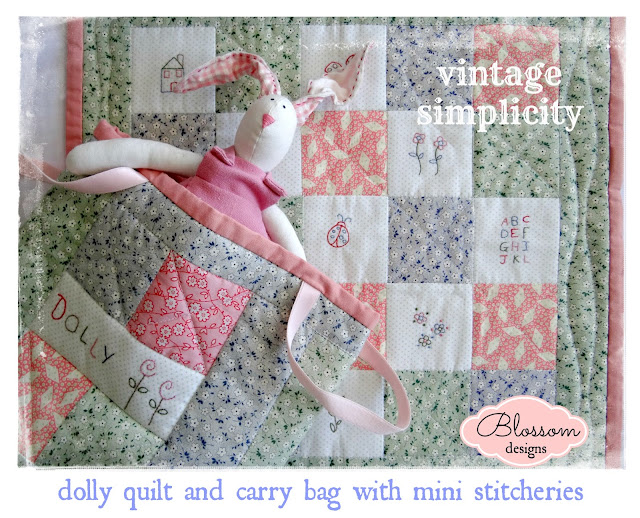 The pattern is here.

Back to the churn dash blocks...I'd better show show you the two Flower Sugar ones I made at the weekend which jiggled my memory about the forgotten blocks. 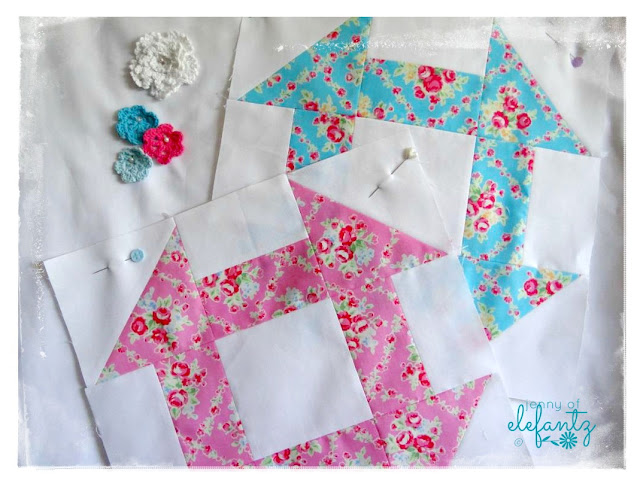 Did I mention that Churn Dash is my favourite patchwork block? Well, it is. In fact it's hard for me to consider making any other.

The 8" block pattern I use for the vintage style blocks can be found here.
The 12" block pattern I've used for the Flower Sugar blocks is here. This is also a quilt pattern.

I can relate to finding projects I'd neatly stashed away and proceeded to forget all about them. Infact, I cannot find the almost 50 hand pieced Farmers Wife blocks I made. I think sweet pretty fabrics are definately your signature. Blossom's doll quilt and bag are cute. It is so good to know that Blossom is taking care of herself and her babe , putting themselves first. I send many angel healing hugs to them. I look forward to seeing more of your churn dash quilt.

I think is a nice idea , a great idea really, to use the Blossom pattern for teaching a young lady. Is very sweet, and very appropriate.
Blossom is a few streets from you! That is very good.
Yellow is missing in your sewing life!! :)) I not think that is a problem. Each one has her style. And Jennifer's style is fantastic.
Have a blessed day.

Awww another lovely post my dear
Full of sweet treasure ..the bunny is so cute in the bag...
Lovely blocks my dear...sending you big hugs x

This was a fun post for me to read. We are having a doll quilt sew along on my blog right now, too bad you didn´t post earlier, I think the ladies have all picked their patterns by now, but I will send them here anyway.
Take care of Blossom!
KATRIN W.

The fabric you used on those churn dash blocks is adorable - it's time for you to get them finished :)

Those are adorable little designs. I found 14 State Bird (USA) embroidered blocks I did in the 70's when I was in HS. I would like to incorporate them into a quilt top some day. I love the churn dash design sometimes called hole in the barn door here in the States. I also love pinwheels although I get a bit crazy trying to get the points exact in the center. I find myself lacking in yellow also but recently started buying batiks in yellow, orange, tan and green. I want to make the pineapple quilt based on the one I've seen where they applique a pineapple shape and cover it in yo-yo's. I still have to save up for the quilt top fabric in citrus-y colors.

I've always been so fond of the Churn Dash block, would have to say it is my all time favorite. No reason really, just can't help loving it! Just shows that reason doesn't have much to do with what we love. Here in northern Minnesota, USA, winter is anything but gasping warm so it's hard to imagine that much heat. We will be below freezing most days for some time yet to come. Thankfully, you found such a beautiful way to spend your time indoors creating these lovely patterns and designs. I guess we should hope that the weather there continues to be HOT! -Diane Jackson, Bagley, MN, USA

Your work is just stunning! I got such a surprise that you have Bluebirds on your reading list! Thank you very much! Now that I have found you I have some serious reading to do!
Thank you! Love Annabel.xxx

That sounds lovely having her so close. Her designs are very pretty too. Best wishes to you all.

This was such a lovely post...but then they really ALL are. Churn dash is one of my favorite blocks as well, I especially love them placed on point. Your blocks look so crisp and beautiful on the white background. Blessings....thank you for sharing.

I bought the pattern and can't wait to make it. Do you have a suggestion for the "doll" Is there a pattern for it?
ghorton1@cox.net

I love it, too, but I always make 9 inch ones! =) Though I've made a few small ones in the tall churn dash. Someday, I'll have to finish that tall churn dash set and make a quilt! Love Blossom's cute little pattern.

I remember all that!!!! Thanks for the trip down memory lane - such a pleasant visit - I adore Blossom's pattern, so sweet! I think my favorite quilt block is APPLIQUE, lol....I'm such a bad piecer, and no patience.

I love Blossom's little quilt and bag. So sweet that she is near you and you are going to have a sweet baby to love soon! Your churn dash blocks are wonderful; and yes, you need a little yellow in there. lol

I have a couple of "started" quilts stashed away in my closet too. Very nice blocks you made for your friend. Blossom's little quilt is adorable. Sorry to hear that she is having back pain.

Dearest Jenny, I will not try and explain why tears of delight are rolling softly down my face right now; I am so thrilled for you and your daughter! Thank you so much for sharing and have a fantastic creative day!

I enjoyed your blog for the first time today. What a wonderful story and pics of your daughters first work. Precious! I love the thread that binds us women together in the common love of fabric no matter where we live or how far away. Thankful for the computer that makes our world smaller. My favorite block is the log cabin but the churn dash runs a close 2nd. I have a bouquet of 12 churn dash blocks hiding away in a drawer right now that you made me think of. All the matching fabrics are there too.
Such a blessing that you're going to be a grandma and that they live close.