Before I show photos of my new Sampler progress I think a big smile from Cully May will brighten your day more than anything else, don't you? 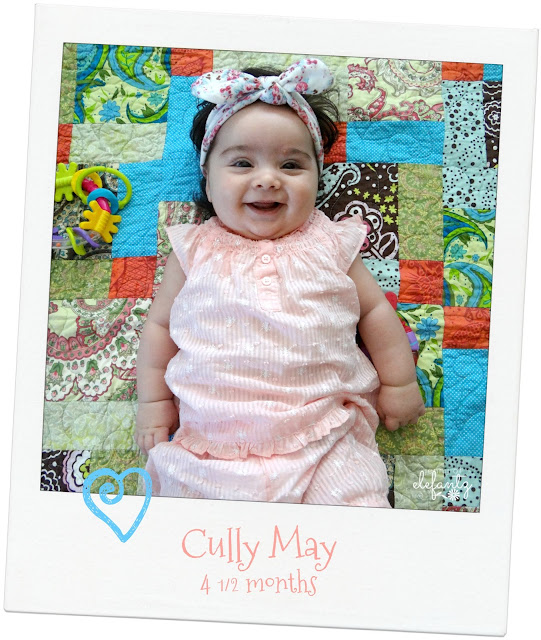 She and I spent four hours together yesterday, all by ourselves, and I became re-acquainted with those old Play School songs I used to sing to her mummy, aunties and uncles when they were little.
We played on the floor and blew raspberries at each other, she sat on my lap while I rolled us around Elefantz HQ in my office chair (and boy, did she love that!), she tried her hand at answering emails on my laptop but sadly I don't think her language skills are employable yet...and for the odd 15 minutes she took a nap.

I was exhausted when mummy and daddy came to pick her up after lunch, but it was a very satisfied and happy exhausted. And isn't that the very best kind?

Now, about my new Sampler.

For months I've wanted to design a single-piece Sampler stitchery, but it needed to be one which could also offer a set of individual embroideries for other projects.

The background I chose was a small and beautiful piece of traditional pink and white cotton gingham which had been stored away for years waiting for 'such a task as this'.
It really has brought the Sampler to life. much more than I'd dared hope.

"My Simple Sampler 2017" will be the pattern for January's issue of The Stitchery Club.
Here's some progress peeks... 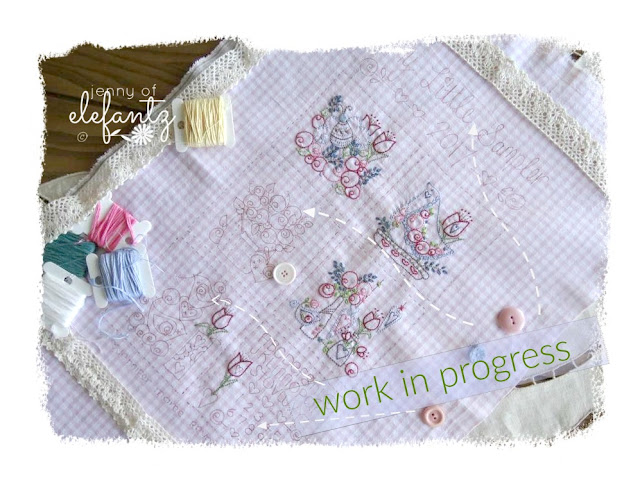 There are six small embroideries separated by double rows of running stitch and a title design across the top.
Along the bottom I will stitch my name, but the pattern will include an alphabet for those who stitch this Sampler to sew their own name.

The first three embroideries are completed, and over New Year and early January I'll stitch the remainder. 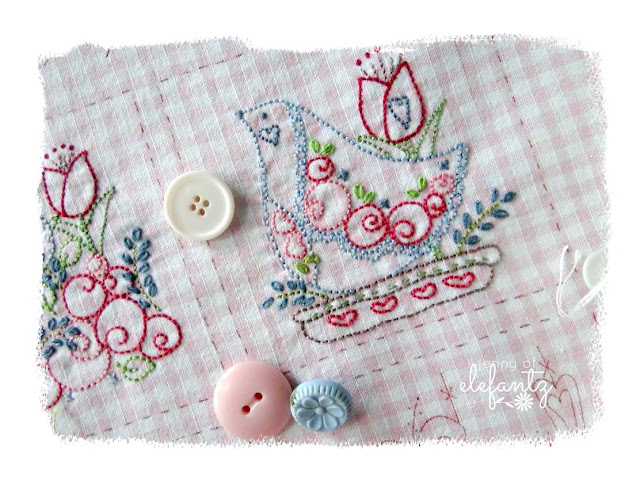 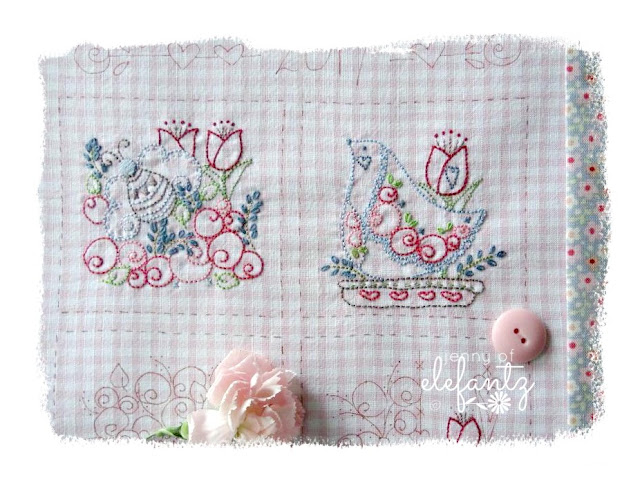 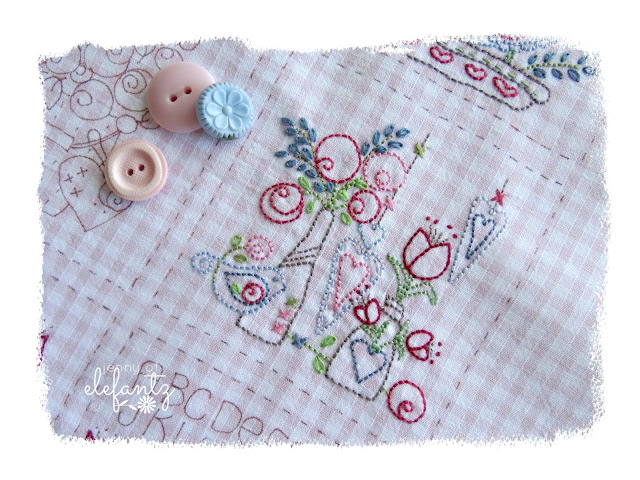 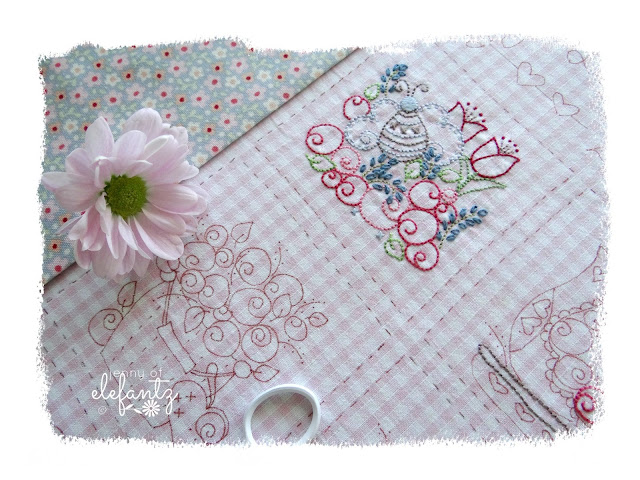 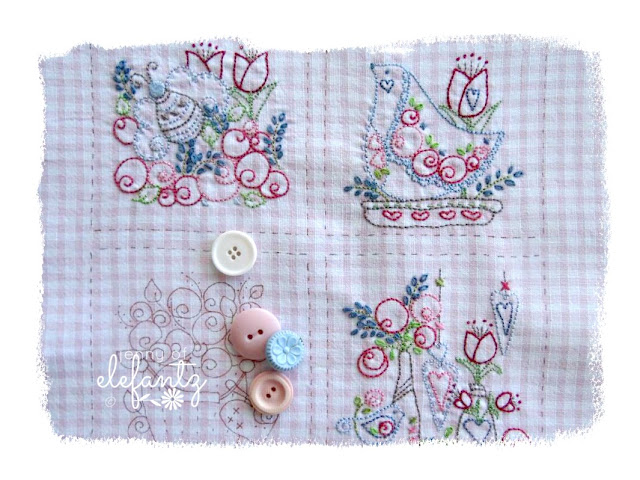 Not sure yet if I'll finish my Sampler in a frame or as a mini-quilt.
With all the life changes right now (Mr E changing jobs, looking for a new rental home, packing up and moving within 3 weeks...) that's not something I need to have an answer for immediately, but a decision to make in a couple of months.
But regardless of the final display, I'm genuinely loving stitching it... 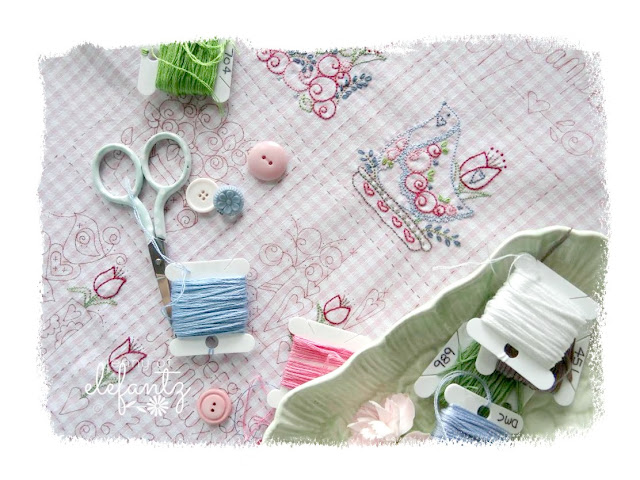 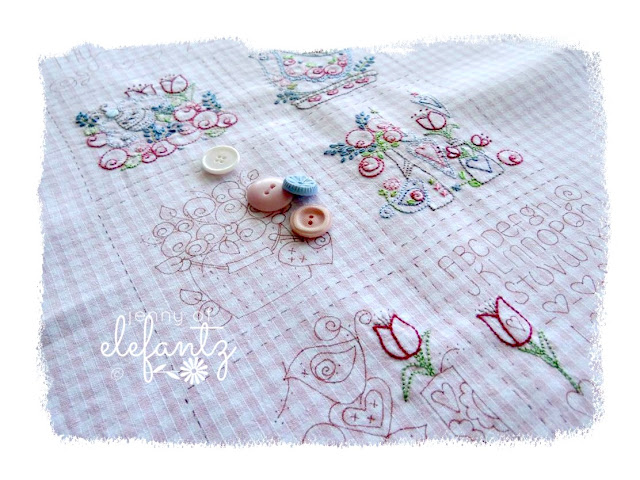 There are some CHANGES to the normal flow of becoming a member of The Stitchery Club during the next month as we'll be in a state of 'movement and upheaval' and I have decided to give myself a little holiday break.

Normally new members have until the 16th of the month to join and then receive the new issue of The Stitchery Club via email on the 17th.

For the next Club issue only, I am closing new memberships on January 5th.

You can join anytime between now and the 5th if you are not already a Club member and within 24 hours you'll receive a free gift pattern via email so you'll have something sweet to stitch while you wait for your first Stitchery Club issue to arrive on the 17th.

This is the gift pattern I'll send you... 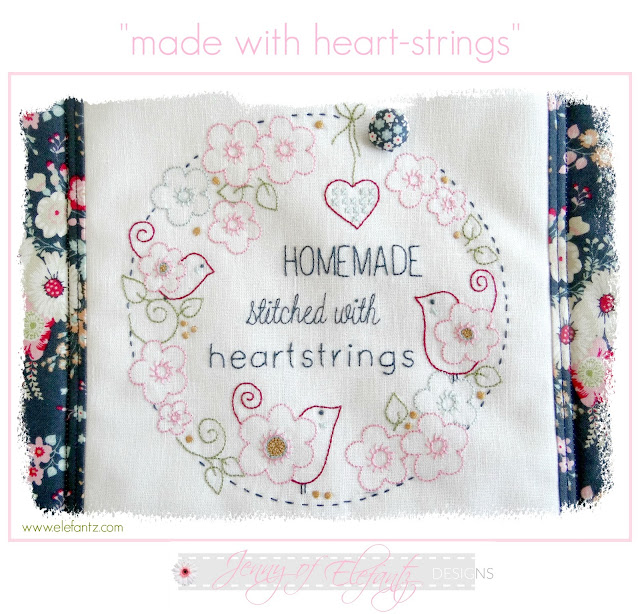 Go HERE to learn more, or to join the Club today.

Note: The pattern for "Made with Heartstrings" is here in my shop as a single purchase.

I'm off to visit a friend this morning, then home again to settle in and finish stitching Cully May's Christmas gift...but I can't show it to you until after the big day. Wish I could!

Be blessed as you go about your doings...

Posted by Jennifer Reynolds Jenny of Elefantz at 9:25 AM
Email ThisBlogThis!Share to TwitterShare to FacebookShare to Pinterest
Labels: Cully May, Elefantz patterns 2016, Elefantz Patterns 2017, My Simple Sampler 2017, THE STITCHERY CLUB 2017

Yes, I did have a smile on my face seeing Cully May and there will be many more smiles as everyone sees her! Love your sampler, all the pieces you've shown so far are just adorable. I hope you have a truly lovely holiday season and enjoy your time with family. See you again in the new year! - Diane from Minnesota

What a gorgeous and happy little angel you have. So glad you get quality time with your little granddaughter. Love the Jan pattern. Good luck with all the moving. Take care, Guida.

Cully May is certainly a little cutie and she looks like a real giggler. You must feel so blessed. Despite being exhausted I bet you thoroughly enjoyed your time with her. I am so looking forward to the birth of my grandson in February. Your sampler is looking so beautiful and I think I shall "need" to purchase it when it becomes available. I am heading over to Craftsy now to buy that cute stitchery at the end of your post. Thankyou for a lovely year of blogging and all the beautiful designs you have created. May 2017 bring you and your family great love and joy .

Thank you Jenny for the photo which did indeedy brighten my day. She is such a cutie for sure. Your sampler is absolutely gorgeous too. I must admit I was looking after Alec last weekend & he was in his Highchair covered pretty much all over in yoghurt, happily eating it with his fingers watching me (& watching Barney) & I leaned over & told him how much his Granny loves him & was rewarded with a big sloppy yoghurty kiss !!! Just priceless :-)

Oh Jenny your precious granddaughter is indeed a very bright spot with her smile and happy disposition. That exhaustion is a good one. Love your sampler for January Stitchery Club. Please do take time for you as you and Mr. E are in total transition. I am a mess just having our home listed For Sale. Merry Christmas Bliss and Jingle Bell Joys...

There's just something so sweet, and timeless, about gingham!!! And your little cherub is the perfect photo for this season!!!!!

What a cutie pie! I do have a smile on my face! So glad you could spend some time with her. Your stitcheries are gorgeous. Thanks for helping me start my day with a smile. K-

The beautiful Cully May is most beautiful every day.
I think pink plaid fabric is a good choice. Your embroidery is very good there. I think it's a very nice project.

Lovely photo's to look at today but the first one is the cutest - glad you had some 'catch-up' time together :)

The minute I saw Cully Mae's smile, my face automatically lifted in a smile, too. Thanks, Jenny! I like all the possibilities of the new sampler. I actually thought it would be nice for you to be late or skip January altogether, because you have so much going on in moving! At the very least, please do not stress over trying to finish it completely before the pattern is sent!

Your granddaughter is beautiful! Even more beautiful than your stitcheries! Merry Christmas!
KATRIN W.

I love the design you are working on and stitching it on the gingham was a great idea. What a sweet picture of your little granddaughter.

Your sampler looks so sweet, Jenny. Cully May is adorable. xo

Who wouldn't smile at such a dumpling face?
I have a soft spot for samplers and am looking forward to this one. I also have always liked gingham. Maybe because my maternal grandmother always had a gingham apron on with chicken scratch embroidery she would have done herself. If she came over to our house she would bring an apron along. I find myself doing the same thing when going over to one of the kids. I don't like to sit idly by, but I also usually dress up a little. I find that I cannot go into a kitchen without an apron on. lol

Oh what a precious! I remember those days. Thanks for the smile she gave me with your posting. Gorgeous sampler, Jenny.

Feathers in my Nest said...

Oh, she's just a Sweet Darling. Beautiful smile...looks like such a Happy baby. Those times with her are the memories of the future...LOVE your sampler, wonderful work as always.

Cully May is just gorgeous and what a lovely way to spend a few hours....

Wishing you a peaceful and happy Christmas filled with the joy of your beautiful family and husband.

Good luck with house hunting. I pray you find one that will continue to inspire you and allow your creative spirit to thrive.

Your little Miss Cully May is adorable. Have a wonderful Christmas and New Year together.

Thank you for your beautiful words, creativity, projects and thoughtfulness throughout 2016. You are my daily go to. THANK YOU and God Bless.

Sweet little Cully May is so adorable! And your new stitching is very beautiful, I so enjoyed your lovely photos. Wishing you and your family a very Merry Christmas!
Helen xox

I personally do not sew...I just visit here to see the exquisite work and the palpable sense of hope and possibility that emanates from your blog.

Merry Christmas and best wishes for the holiday season and the new year!

Jenny, Cully May is adorable and oh so cuddlelicious!! Wishing you a very Merry Christmas and a happy healthy New Year! Thank you for sharing on your blog.
With love, Linda from Alabama