Making my hussif is a journey of kinds.
Not sure if I've put so much of 'me' into a project for a very long time - it's become very personal since discovering more and more about the history of hussifs, huswifs, and 'housewives'.

Yesterday's progress.
The little bird and spool were stitched...

(this design will be included in the July Stitchery Club patterns) 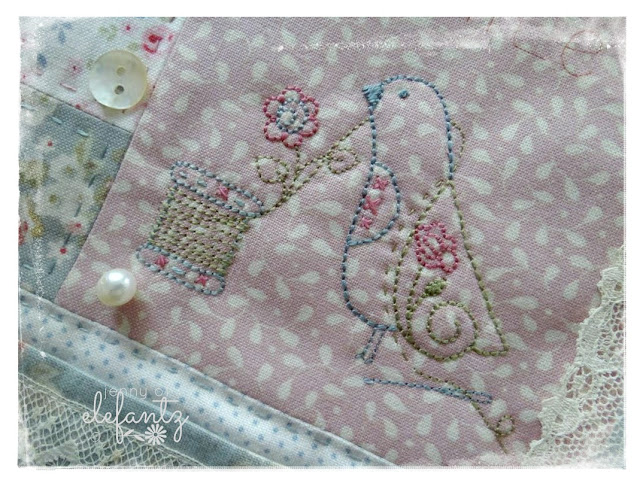 Tiny seed pearls scattered in the sunlight made their debut on lace... 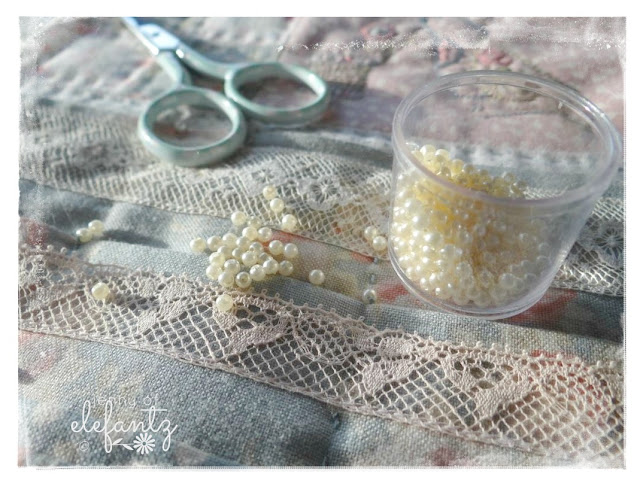 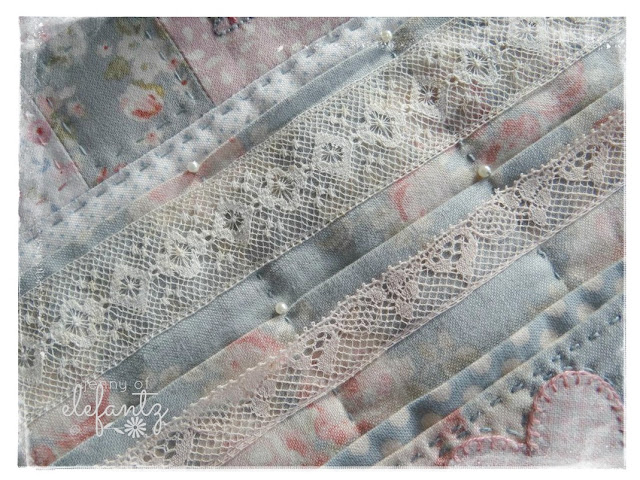 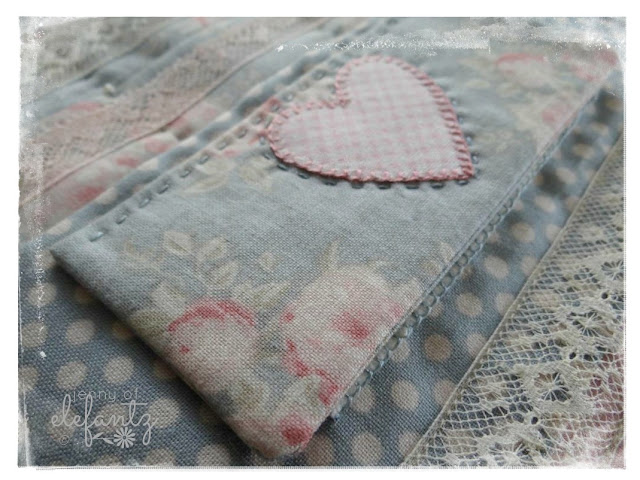 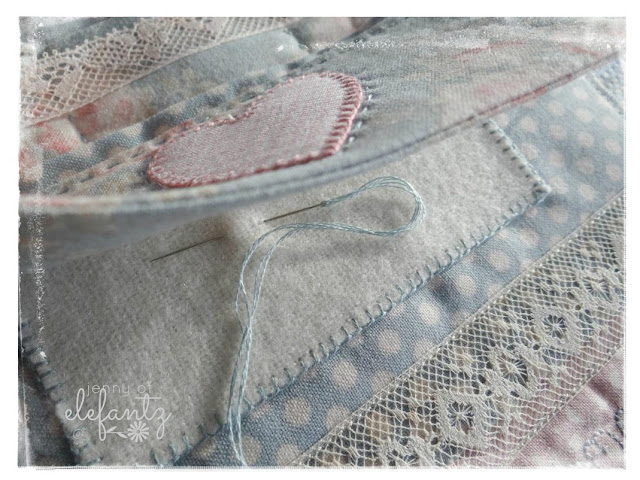 All the embroidery is complete now... 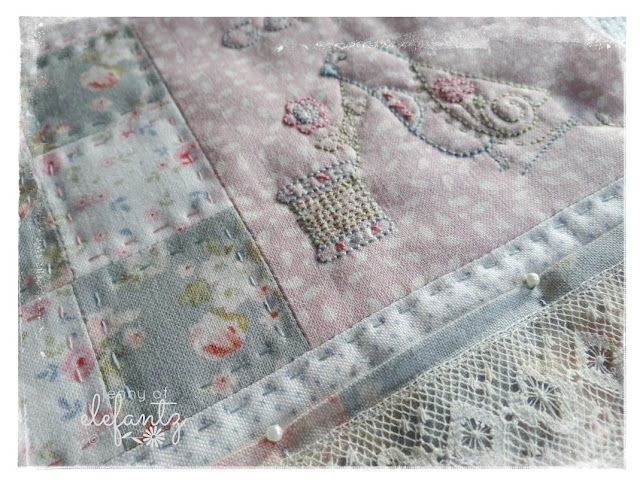 ...but there's still something else to make today and time needed to sew it in place.
And then a little more hand quilting and embellishment before the finale.

I'm using scraps of Tilda fabric for my Hussif, and stitching with Cosmo threads. Truly, they carry a great deal of the beauty you see... 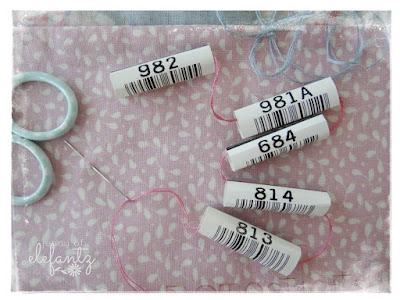 If you're new to Elefantz and would like to read (and see) more about the Tale of a Hussif you'll find day 1 here and day 2 here.

During the American Civil War hussifs were made for soldiers by their loved ones, but they were not called a hussif, instead they carried the original Regency name of a "soldier's housewife".

Here are some photos and information I found.... 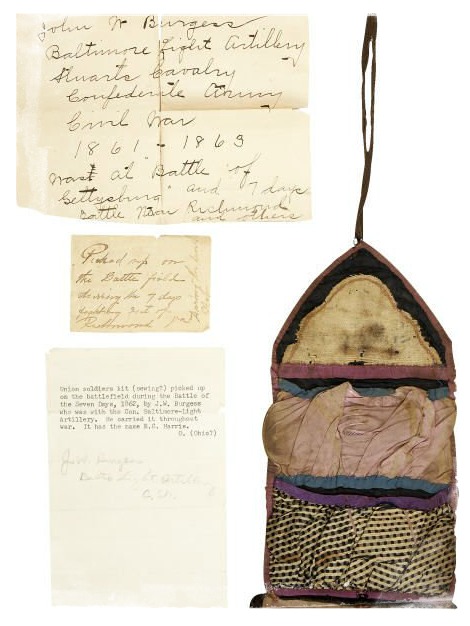 The one above is on an auction site and included some of the history, which I found fascinating -

Civil War "Housewife." Probably began life in the possession of a Union soldier. "Picked up on the battlefield during the Battle of the Seven Days 1862 by....John W. Burgess Baltimore Light Artillery Stuart's Cavalry Confederate Army Civil War 1861 - 1863 was at Battle of Gettysburg and 7 Days Battle near Richmond and many others", is the period ink script and early typewritten tags which accompany the kit. Also stenciled on the underside of the wool needle pad, in the kit is "R. C. Harris O.", doubtless the original owner from Ohio. The kit is in very good condition, even retaining the original string ties for closure. John Burgess enlisted on June 6, 1862 and served with the 2d Md. Light Arty until his Appomattox parole, April 16, 1865. The 2d Md., commanded by J. B. Brokenborogh and equipped with Blakely rifles and 12 lb. Napoleons, was one of the most heavily engaged Confederate artillery units of the war and at Gettysburg engaged in one of the most desperate artillery actions of the war with Battery M of the United States Regular Artillery. Accompanied by a complete set of records. A remarkable capsule of Civil War history. 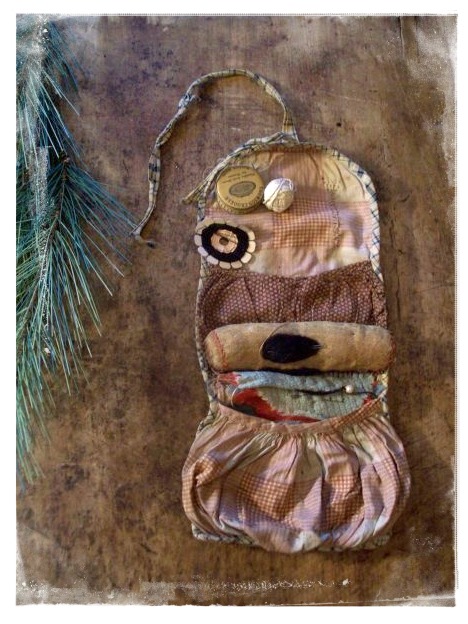 I also read on an old 2001 webpage that during WW2 school children in the US were taught to make small felt envelopes which were filled with sewing essentials and distributed to soldiers by the Red Cross.

Are you enjoying our little history adventure this week?

Mr E is home today so between my stitching hours I'm sure we'll head out for good coffee and some warm winter sunshine while we walk the dogs...

Have a blessed day! 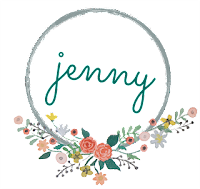 Posted by Jennifer Reynolds Jenny of Elefantz at 7:30 AM
Email ThisBlogThis!Share to TwitterShare to FacebookShare to Pinterest
Labels: History of a Hussif, Making of a Hussif, Stitchery Club

Thank you so much. I am finding this very interesting b/c I've never heard of them before. And yours is absolutely gorgeous. Next month's stitchery club is going to be wonderful. xx

I am enjoying the history of soldier's hussifs (as well as watching your version come alive:) ... it just so happens that I drove through the Gettysburg area today (with two quilting friends, out for a day's lark visiting quilt shops:) - and thought about how awful those battles were vs. how beautiful the area is now. So sad to think of all those men!

Seeing your beautiful stitching to make this amazing hussif and learning about history is a bonus day indeed. Thank you dear. I LOVE this little birdie who is sewing with needle and thread. Hooray for being part of your Gentle Domesticity Stitchery Club each month.

This project is coming together beautifully!

The Hussif info is fascinating Jenny, thanks for including that. I love the auction hussif with it's history.
Your little bird with the spool is gorgeous, you have been blessed with such a talent for designing these stitcheries. I am still mulling over ideas for my sewing case/book, I have lots of things I want to include, fabrics to choose etc, this post is making me itch to get it started :-) Have a lovely day. x

I am enjoying the eye candy once again and the history lesson.

Hello Jenny! I can't wait to see the finished hussif the snippets you have shown are so pretty! Love the history behind them too... thank you for sharing what you have discovered about them! Will you be writing a pattern for the hussif? :) x

Beautiful, both the project and the prose.

I'm very much enjoying the history. Thanks for sharing your finds and information. Yours is so beautiful, I can't imagine how it could be improved upon.

It's fascinating Jenny, thank you. xx

I love the history. I just read a book about the civil war and also the book Mrs. Lincoln's Dressmaker by Jennifer Chiaverini. Your work inspires us all to strive harder in our needlework. Just love your blog. I am greedy. Wish there were enough hours in the day so you could post twice a day!

Love the history lessons. Looking forward to the reveal of your husswif.

This is a very interesting read indeed Jenny. I'm loving the history lesson.