There's a big difference between dusty and dirty.

I used to think I had to scrub every inch of my home before I could invite anyone over because I had this perception that a "bit of dust = dirty house".
Wrong.

Not sure where that idea came from but it stuck with me for a lot of decades. Maybe from Nana? Apart from regular daily chores she used to polish the taps and the kitchen sink every day. Her tiny little one-bedroom flat shone - nah, it actually sparkled. She was a clean freak. But you know, those three rooms and outdoor bath were all she had and she wanted them to be neat as a pin.
Nana's semi-detached single floor flat was her mansion and by golly she looked after it.
She didn't have much to her name, so she lovingly cared for the things in her home - just like she cared for me when as a 3yo I became her responsibility.

Due to limited space almost everything Nana owned had a purpose, except for a beautiful china cabinet she'd inherited from her mother. Inside the curved glass of the polished oak doors were tiny gold-etched glasses, dainty porcelain figurines, and green glass bowls of all shapes and sizes. The locked china cabinet was polished each day, but the contents would only be taken out for dusting on rare occasions when I was not around. Wise woman.

But back to the 'dusty is not dirty' thing...

The Trade Winds blow through the tropics every October/November and that cool air is so refreshing that we open all the windows and doors and let the breeze rush through the house 24 hours a day.
As wonderful as this is and as deeply as I miss those winds when they're gone, I don't enjoy the dust 'clean-up' in December - mostly because mixed in with the dust is cat hair, lots and lots and lots of fine cat hair thanks to Princess Sophie.

But here I was at the end of December and my annual 'post-Trade Winds' deep clean was yet to begin so yesterday, in order to get a start before 2016 announced it's arrival, I decided to tackle the bedroom.

The dust bunnies were everywhere. 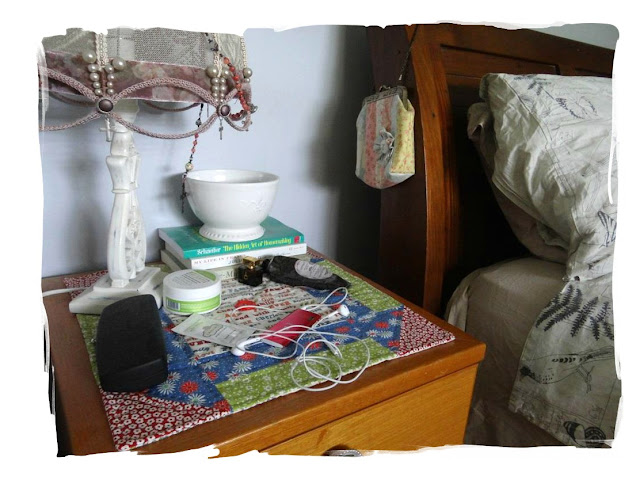 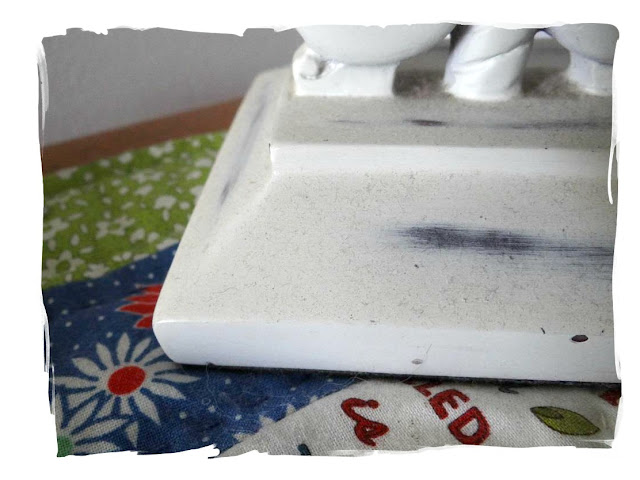 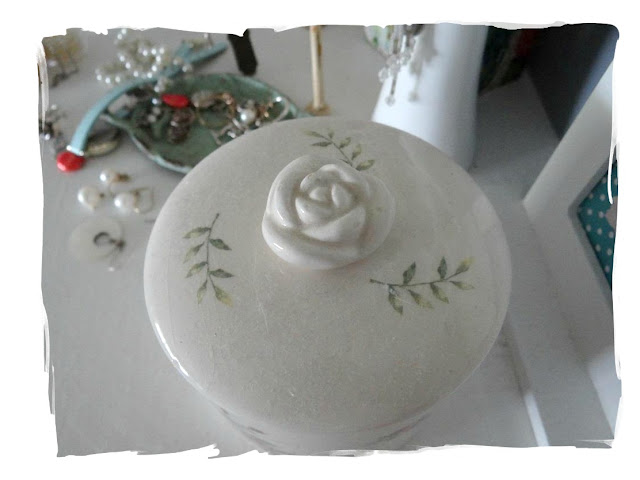 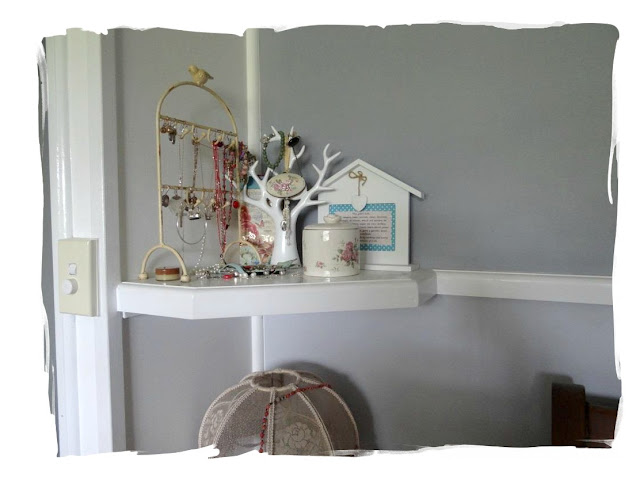 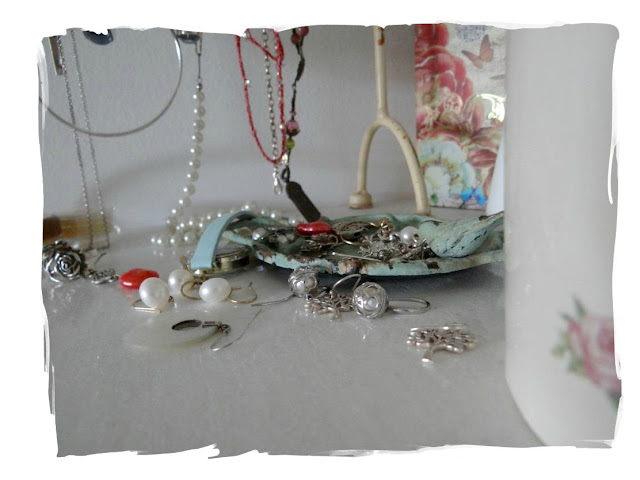 Dust gets trapped in the most obscure places. Between the lace of the lamp shade, inside my basket of wool and between every piece of cane, all over the quilts, along the door ridges, in the window screens and along the sill, among all the teeny tiny pieces of silver jewellery and inside the curves of each and every ornament. - I could go on (and on)... 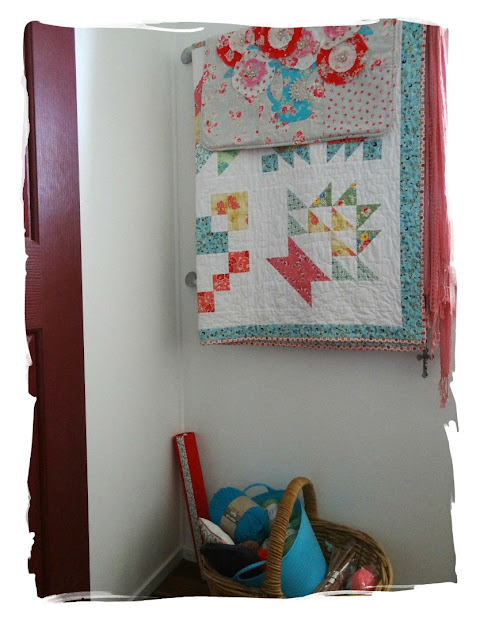 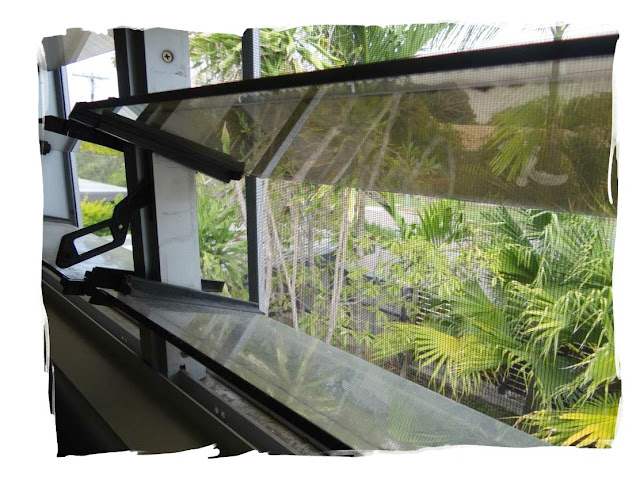 Dust was behind, and under, and in, everything.
All I could do was pull the room apart piece by piece to dust, vacuum and polish. 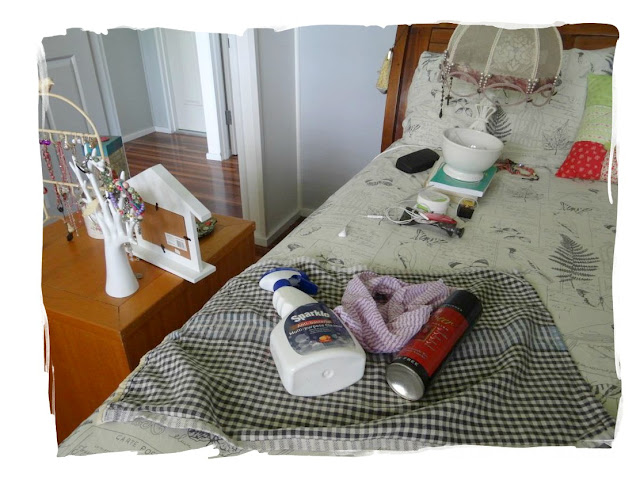 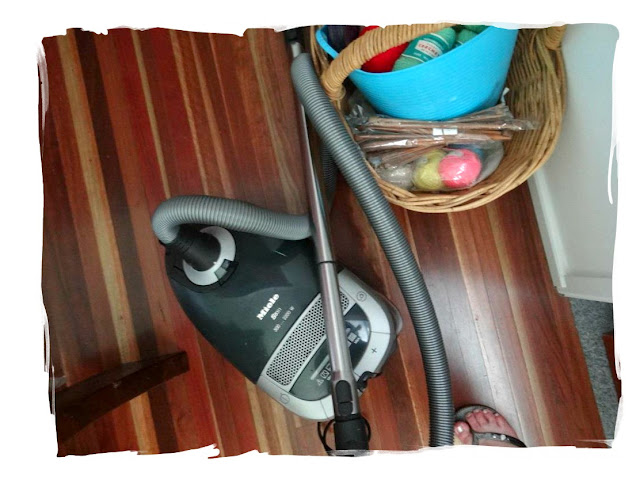 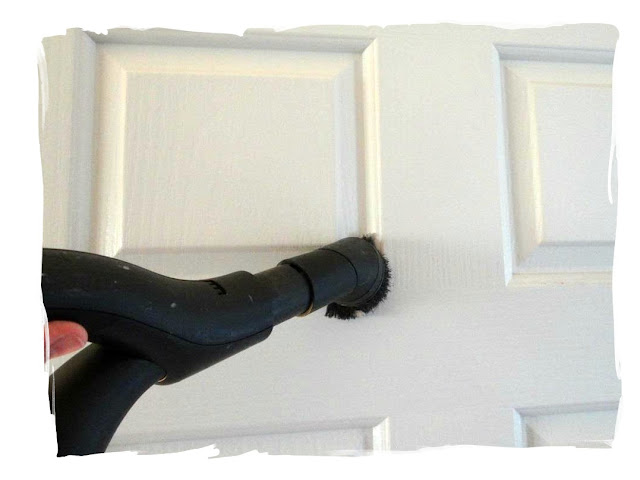 Along the way I ended up culling a big bag of 'stuff' and though that was not in my original plan, it felt quite liberating.
The room is lovely again; calm, clean and welcoming. 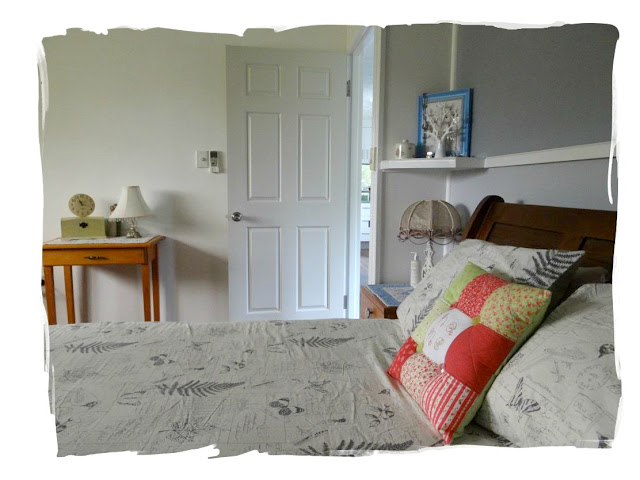 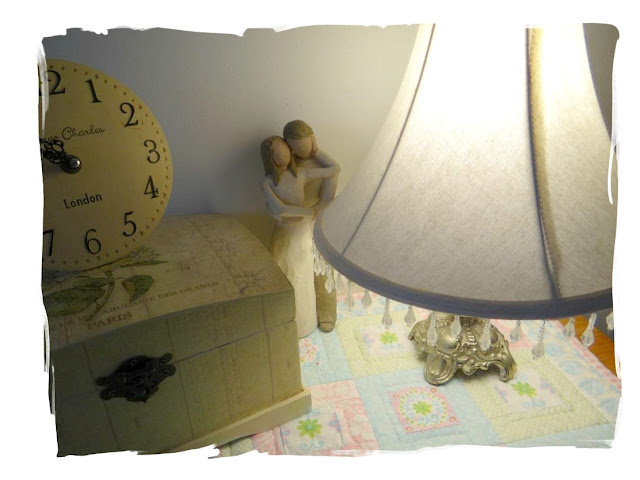 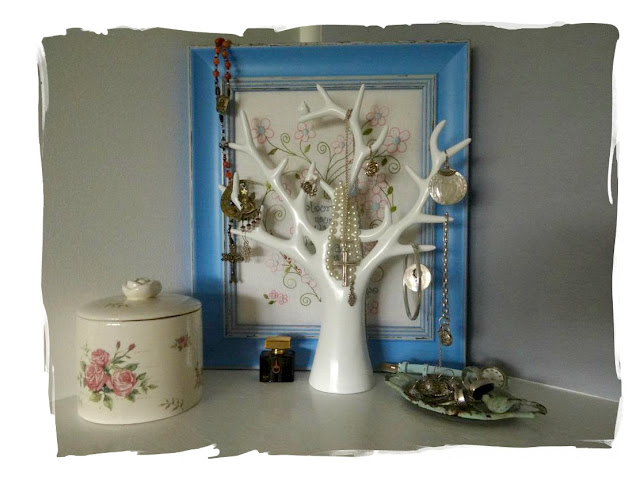 And there's even a scent of lavender in the air. 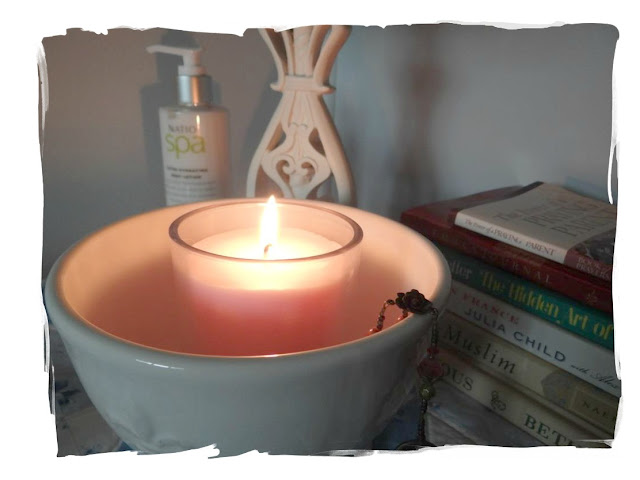 But it's not perfect.
And that's fine with me.

I still have plastic tubs of fabric, wadding and notions in the corner, Mr E's television and Playstation under the window, a walk in wardrobe that doubles as storage for luggage, gifts, finished projects, bath towels and files, and a green armchair the cat sleeps on... 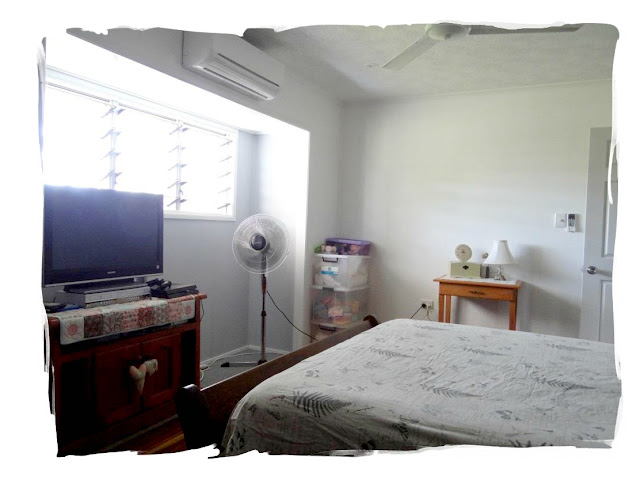 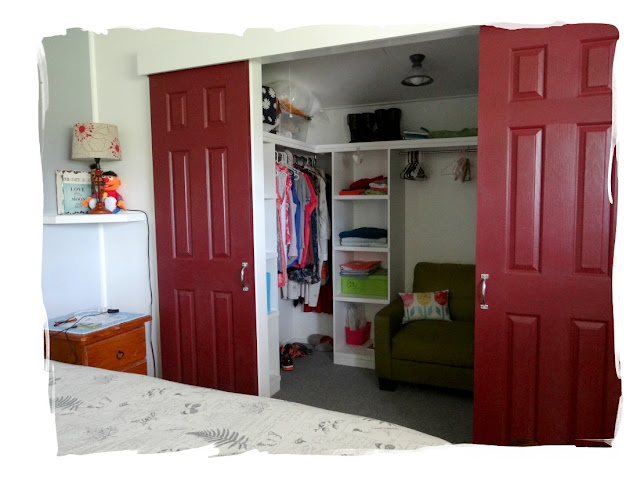 This room is part of our home.
A home that is a dwelling place, a workplace, and a sanctuary from the outside world.
It's clean, often messy, more often dusty, and displays visible evidence that we 'live' here.

What more could we ask for?

I think I'll tackle the office and sewing room next.
May need chocolate first...it's exhausting work, you know.
But very, very satisfying.

Posted by Jennifer Reynolds Jenny of Elefantz at 9:09 AM
Email ThisBlogThis!Share to TwitterShare to FacebookShare to Pinterest
Labels: cleaning house, Living the Gentle Domestic Life

Hi Jenny, Don't you know that dust is a protective coating for all your things! My house is well protected at the moment! LOL! Have a very Happy New Year and I look forward to another year of friendship. Hugs, Christine xx

I always feel more peaceful after I have done some housework. I function better in a clean, straightened up area. I like stuff, lol a lot of stuff, but it all has to be in its rightful place.

Well I think it looks lovely dusty or dirty! The dust here in Melbourne accumulates to visible proportions every three days. We are west facing and have jarrah furniture that shows every spek in the sunshine. We cleaned up the other day before some guests arrive and my hubby lives it when people come over as the house is clean. I don't give k it looks lived in!

It always feels great after doing a deep cleaning. I am terrible at keeping up with the dusting.

I do love that feeling in the home after its had a good clean. Admittedly though, with 2 kids under 10, it's a rarity. Enjoy your choccie xx

hey! Not fair I thought I was the only one with dust bunnies!!! :-) I run my long arm quilting business from home, inside our home, so my excuse is that it is the batting/wadding dust! A house should be a HOME, a place for us to rest, relax and enjoy. Wishing you the best for 2016 and of course the constant battle with those dust bunnies!

I love reading your beautifully written posts. Love to you and have a wonderful 2016.

I don't mind dust or piles of stuff surrounding me for a while...until I get overloaded and do the cleaning my ancestors did each and every day. My home is comfortable and that is quite fine with me. Your cleaned and de-cluttered bedroom is calm and serene now. You are embracing the Gentle Life Dear...

Your 'after' photos certainly give a sense of calm Jenny! I spotted a willow tree ornament there too, I love the clean feel of them and have about five now, including that one, all representing our family.

I love reading you sweet post ..so true home is beautiful x
I wish you a very happy new year.
Love you x

I give up trying to keep up with dusting. Since they built a marina across the road from us we have been getting so much dust. It builds up in the sliding window rails, it is always on the toilet seat and my poor car gets filthy just sitting under the carport. The other day I broke one of my little owls while dusting so I have decided it is a dangerous thing to do LOL. At least with floor boards I can see those dust bunnies and dance around with the Enjo mop. THanks for another lovely post. Happy New Year.

What a wonderful way to start 2016-- a w truly clean room. I'm terribly behind on my dusting and due for a deep clean. You always inspire.

Good post. Oh what our mothers have done to us and our thinking about a clean house. I live by a mulch factory. There is not a minute of the day that there is not a layer of dust on everything in my house, even minutes after I dust. Add the dog dust of three large dogs when they shake..well, just forget about it!!
Happy New Year and thanks for the post.
xx, Carol

Good Morning Jenny! My mother absolutely loves to clean house. I have so much fun teasing her that it sparkles and shines! I, on the other hand, enjoy a clean home but do not mind the lived in look with dust bunnies and black dog and black cat hair attached to almost everything. One task that I try and do at least twice a year though is to wash the walls from top to bottom. I have lived in so many homes with paneling and it need to be cleaned with hot soapy water, rinsed and let dry and then polished. I know it sounds like a ton of work, but it really only takes about a day per room. Your bedroom looks sparkling clean; now definitely go enjoy a cup of tea! Have a Happy New Year!

We're on the same wavelength again. I was thinking about this while I was sewing a while ago. There's so much I would like to do, but there's no place to put things if I pull everything out of a room! I learned to live with dust in the desert. I rarely even notice it. I did dust the piano the other day, and I noticed the spots on the backsplash of the kitchen sink and cleaned that today. Mostly, I just don't see things, though.

When my son someday moves out of the basement, I'll start with that room, painting, carpet cleaning, building shelves in the closet, and then empty some things into the room so I can clean up where they used to be. Right now, I vacuum occasionally, and clean kitchens and baths often enough to feel good about it. More than that doesn't get done often. And it's okay. I live here, and there's rarely anyone in my space. =) Thanks for showing your before and after pictures. I love your bedroom and the closet makes me envious. I try not to have dust catchers, but you know, things just accumulate.

I have news for you - after about five years, the layer of dust stops building up. The top layers compress the bottom ones and it stays at the same level. *giggle* Our house is very dusty too!!! And when you sew, you create a lot of dust. But while it's a never-ending chore, I'm not as obsessive as I used to be....by FAR. If you spend all your time cleaning your home, how can you enjoy living in your home? When I think of how my home used to sparkle - every nook and cranny was cleaned DAILY - and the wasted hours, I could cry.

My mom used to have a sign hanging on the wall of the kitchen - clean enough to be healthy, dirty enough to be happy. I like that. Jenny, dusty or not, your home is very welcoming, a true sanctuary.