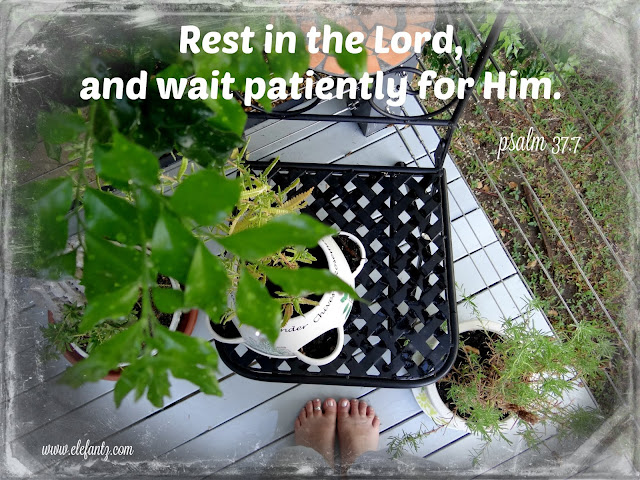 There seems to be a common trait within most of us.
The need to do or have or be - as soon as we can.

Regularly we're told via social media, magazines, friends, famous people and 'inspirational' posters to push through our doubts and fears and forge ahead to achieve our dreams or desires.
And sometimes that's the right thing to do.

But other times it's not.

A good idea may not be a God idea, and just because you have a 'peace' about it doesn't mean it's God either.
After all, remember Jonah?

He was God's prophet, and after disobeying a command the Lord had given him he fled, taking passage on a ship that (he believed) would take him away from the presence of God.
Now I think I would have been pretty freaked out if I'd run away from God and not done as He'd instructed me, especially if I was one of His prophets, but once Jonah got on that ship he wasn't rattled at all.
In fact, he went down to the bow of the ship and promptly fell asleep. As a 'mighty tempest' raged across the ocean and scared the wits out of everyone else on that boat, Jonah did not stir at all. The storm was so wild that the crew were tossing cargo overboard to avoid sinking, yet Jonah slept soundly until the Captain, angry and fearful, shook him awake and demanded Jonah cry out to his God.

Jonah's peace had came from his own decision to do what he  wanted, from separating himself from God's plan and command.

Jesus is another example of how following the right path doesn't always bring peace.

In the Garden of Gethsemane the night before His crucifixion Jesus knew what the Father required of Him and He was in anguish, sweating beads of blood and asking three times in prayer if there was another way.
Yet He obeyed His Father to the Cross despite His anguish, reconciling God and man through His death and glorious resurrection because it was the right path, the only path, the God way - not the peaceful way.

Grasping this was a huge thing for me, a life changer. Once again I understood that I am clay, a cracked earthen vessel which is blessed to carry the Holy Spirit inside, yet will always mix holy truths with human failing. Therefore I must not act rashly on a decision because I feel  a sense of peace but always question my motives and consider the uncomfortable option as well because everything I do in life must glorify God above anything else.

I must practice the art of waiting on the Lord until I'm sure the path ahead of me is the one He would have me follow - then even if I do make a mistake, as long as I've put my own wants aside and done what I truly believe the Lord requires (as hard and not-peaceful as that can be at times) I can trust Him to work it out to His glory.

Let's not be so comfortable with our "I have a peace about it" feelings?
It won't hurt to question them.
It may even help us hear more clearly the promptings of the Holy Spirit in the future...

Medical Note on Luke 22:44 : “hematohidrosis.” “Around the sweat glands, there are multiple blood vessels in a net-like form.” Under the pressure of great stress the vessels constrict. Then as the anxiety passes “the blood vessels dilate to the point of rupture. The blood goes into the sweat glands.” As the sweat glands are producing a lot of sweat, it pushes the blood to the surface - coming out as droplets of blood mixed with sweat.

Posted by Jennifer Reynolds Jenny of Elefantz at 5:00 AM
Email ThisBlogThis!Share to TwitterShare to FacebookShare to Pinterest
Labels: domestic reflection Sundays, Sunday Scriptures 2016

Such a beautiful post my dear..
Peace and joy al around me
Sending you my huge love x

Good Morning Jenny! What a wonderful message this morning. I know for certain that this is an area that I continue to need to work on. I have passed the points of doing things for "worldly" satisfaction and trying to make myself known and better at everything. Thank the Lord for his patience and teaching that led me through that part of life. Yet, I know that there are many other areas that still need to be turned completely over to the Lord and yet, there is this little bit of thread that holds on...I will be reading over your mentioned teachings and have a wonderful bible discussion with hubby. Thank You for sharing and have a fantastic creative day!

Good points to ponder. I also know that there are good things, better things, and best things. Sometimes, I'm doing good or better things and miss the best thing I could be doing with and for the Lord. It's definitely hard to be patient when everything inside is screaming, "MOVE!" =)

I have been so blessed by God showing His hand in the timing of so many things...leaving late to visit a friend and missing being the one involved in a fatal accident, then providing exactly the right people to help with a job where they have the right skills and equipment (and end up becoming like family)...so wonderful to be able to see that His hand was guiding everything at the time it was occurring!!! I still am a "take charge" kind of gal, but I'm learning to recognize that waiting for the Lord's timing is where I need to be always!

This is excellent and so VERY true! Great examples!

Thank you, Jenny, for this! What a blessing to stop and think about this today. The Lord bless you for passing it along to us. :-)