Mr E and the makeover...

I had this old set of drawers that a friend gave me when she left town a few years ago. She had found it at a garage sale and used the drawers to store her sewing supplies. Great idea I thought!

At my home it has proved useful for storing all the little bits and pieces of hardware I use as well as felt, ric rac, ribbons, beads etc. The only down side was its colour, an awful mustard/ brown/ cream mix.

I mentioned to Mr E that I'd like to repaint the drawers so he took me off to Bunnings where I chose tins of white and duck egg blue chalk paint whilst he gathered a brush and some glass paper.

The next weekend he painted them rather nicely and a huge improvement they were on their former state... 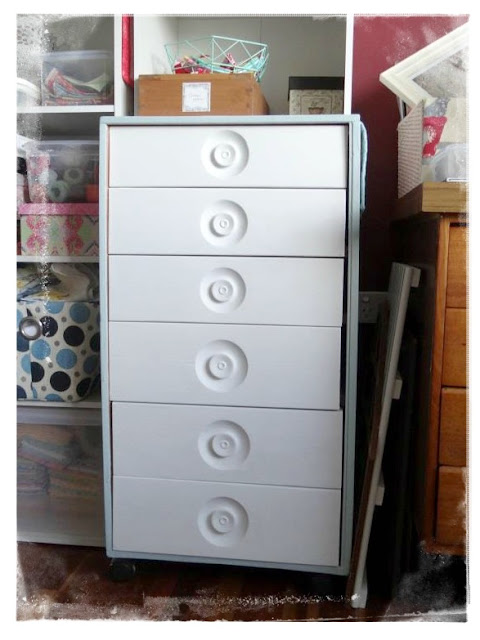 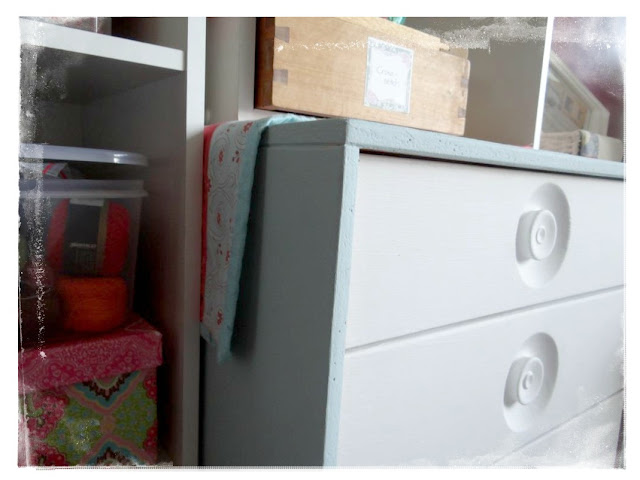 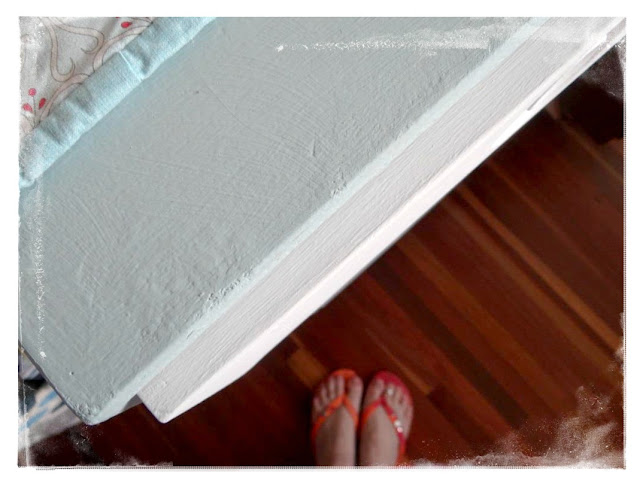 Then I had an idea. Wouldn't it be great if he could make wooden dividers in the top three drawers so I could store my rather extensive supply of embroidery threads inside?

Back to Bunnings, another weekend, and a plan came together beautifully... 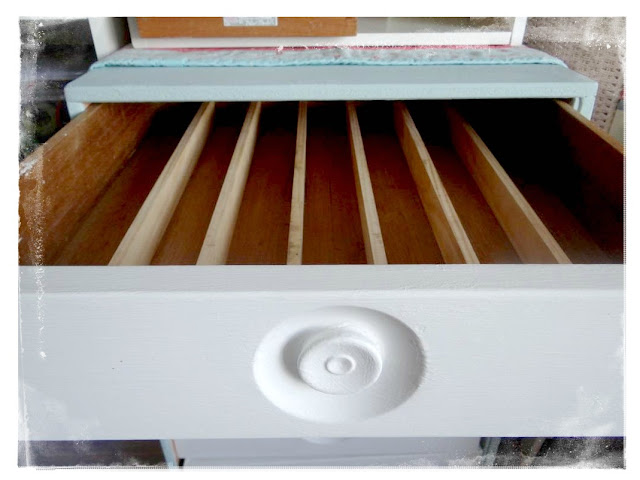 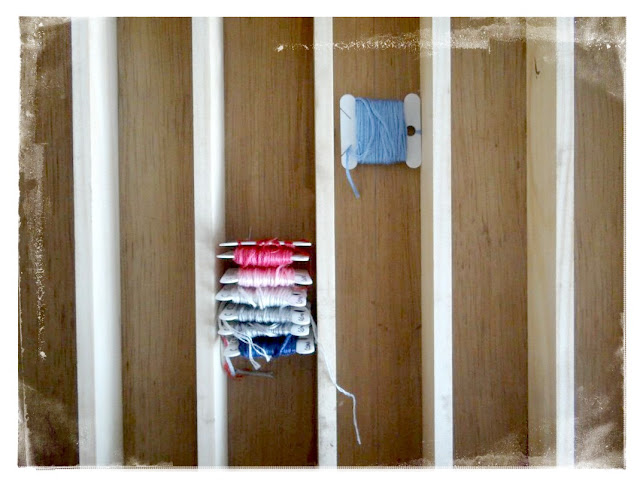 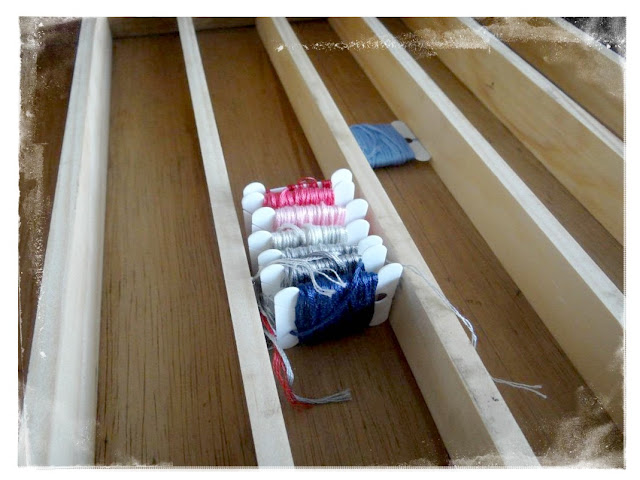 Apart from that, there is still one more step for Mr E to complete before my drawers are ready for use again.
A while ago when a local boutique shop was changing owners they had a large table of items on sale that would no longer be stocked and these gorgeous drawer knobs caught my attention. Not wanting to regret walking away without them I hastily handed over $12 and came home with six of the prettiest blue trims any drawer could ask for.
For about two years now they've patiently languished in a lovely box where I had 'almost' forgotten they existed... 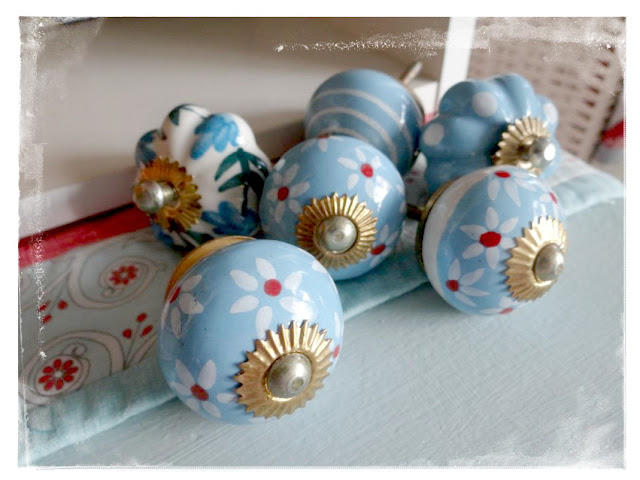 It doesn't matter that they're not all the same as I'm rather eclectic with decorating anyhow... 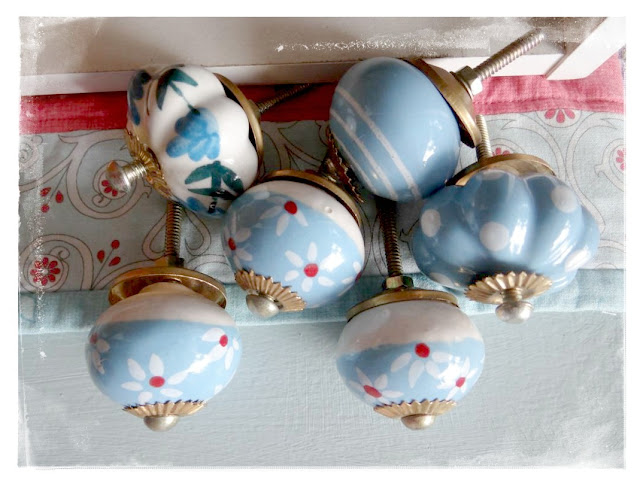 Hopefully in another couple of weeks I can show you the finished makeover - once I've chosen and experimented with lining fabric, Mr E has attached the knobs, AND when my sweet Blossom has finished winding 600 skeins of thread onto card and has labelled them. This really will be a family project when it's done!

And to think it all started with "Honey, I wonder what that old chest of drawers would look like painted white? Don't you think they'd look much nicer?"

Last night I completed the fifth of seven "Days of the Week" patterns for May's Stitchery Club. 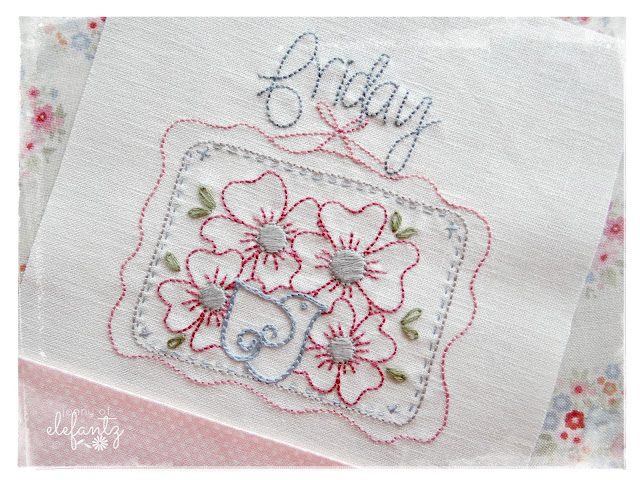 Only two more to stitch, and then I will put them together as a set of hanging pockets.
The pattern for the pockets will also be included in the May issue of The Stitchery Club. 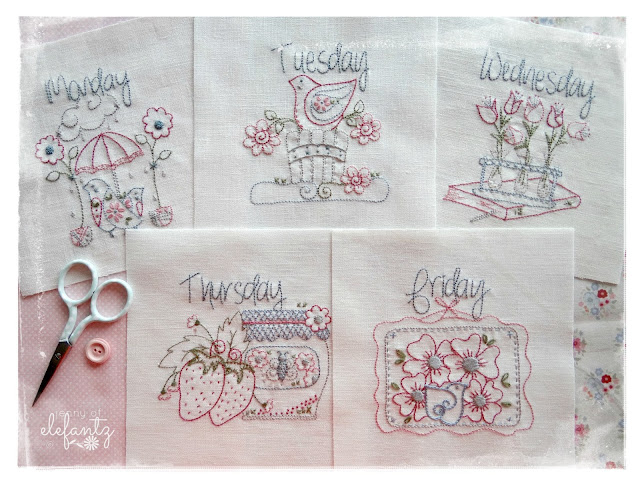 In fact, I think I might do a tutorial here on the blog because whenever I make hanging pockets there's always requests from blog readers to show them how I've done it.
Hanging pockets are brilliant for storing little bits and pieces from the sewing room, or for holding letters and notes. In fact, wouldn't they be lovely filled with hair ties, ribbons and clips in a little girls room?

Enjoy your Friday! I'm about to brew a pot of Prince of Wales tea and watch a Jane Austen movie while I begin stitching the Saturday design...bliss.

Posted by Jennifer Reynolds Jenny of Elefantz at 11:40 AM
Email ThisBlogThis!Share to TwitterShare to FacebookShare to Pinterest
Labels: days of the week patterns, furniture makeover, Living the Gentle Domestic Life, The Stitchery Club 2016

The chest of drawers looks wonderful and will make an awesome storage space for floss with the drawer dividers. I love the knobs and can't wait to see them installed. Blue is my favourite colour.

Miss Blossom...put color number of thread right on the spool and have fun winding...lots of winding and movie watching ahead for your resting time!

I love the drawer dividers and the drawer pulls/knobs. Can't wait to see it all finished.

Hello Jenny
Oh your drawers are beautiful, I love those handles. Great buy there. We are renovating our kitchen and I said to my husband wouldn't it be a great idea so sand back the floor boards and give them a fresh coat of varnish, Well we are onto day 3 and its still not quite finished. The sanding will hopefully be all done by tomorrow, the dust is driving me crazy so next time I suggest something like this to hubby I'm sure he will try and change my mind. I'm lucky he loves me. xx

Just beauuuuutiful Jenny. I adore that duck egg colouring & am always, always happy with whatever I use it on. I look forward to seeing the transformation a great deal. Off to make a pot of tea myself x x x (P.s you could always mod podge over your fabric that you stick on the dividers as it will make it wipeable & also make it stick down a little better ... just a thought)

I love both designs. They are both beautiful in their own way. It pains me greatly to think of any of your exquisite stitches being cut up and put in the bin! I love your blog and read it faithfully. Love to you and Mr.E.

Love the knobs. They are little pieces of work and closely resemble fabric designs...Can't wait to see them installed. Love the idea of the floss going into the drawers as a home.

Those drawer pulls are SWEET!!! What a beautiful chest of drawers! Friday stitchery is beautiful!

What a sweet chest of drawers! I am itching to paint my sewing room, now that you have provided the inspiration! I, too, wind my floss on cards, and that top drawer is perfect for storage. Which Jane Austen movie, may I ask? They are my favorite stitching companions!

Yes, that does sound like bliss! Love the Friday design. Love the drawers! Those knobs are absolutely perfect. I like mixing things anyway, and might have just bought them like that even if I didn't have to. This is going to be gorgeous! I'm wondering how Mr. E. attached those dividers in the drawer, or are they just cut to fit snugly and slide either direction? At first, I thought it was Mr. E. who had a makeover! =) Could you loan Blossom to me? I have a lot of thread that needs winding, and even have a bunch of cards for it!

Beautiful job, Mr E! And the drawer dividers are a great addition. ☺

Good Morning Jenny! Your dresser ideas are coming together superbly and I think it is fabulous that Mr. E is listening to you and doing what you want and that Blossom is also part of the project. The handles that you purchased are spectacular and being that they are a tad bit different makes it more unique and a better part of your uniqueness! I am really glad that you shared this project with us because it shares just a tad bit more of you being you! I also adore the idea of sharing your projects for all this month; I will do all sorts of pretty things with them! Ideas are rolling this way and that way....LOL. as I am sure many other followers are doing the same. Thank you so much Jenny for all that you do and all that you share! You are such an inspiration to me and a valued guiding light in faith! Have a fantastic creative day today!

Mr E has done a great job on the chest. By coincidence I was painting Antique White a chest of drawers yesterday that were very unlovely green. I would have loved to replace the knobs with something like yours but unfortunately the original ones were stuck in place very securely and I didn't want to ruin everything by levering them off. Am thinking about stenciling a tiny flower onto the ones I have to liven them up. Have a great weekend Jenny. xx

I love your little chest. My daughter found a chest of drawers on the curb and she is going to clean them up and repaint them to use after she gets married and sets up house.

As always, your stitching is beautiful!

Those handles are gorgeous - have seen similar in shops here and in Spain and I love them. Will be very beautiful when all finished!

Whew, thought you'd given Mr E a makeover when I read the title.....

What a transformation by Mr E...the chest of drawers look wonderful! How clever were you finding (and snapping up) those gorgeous drawer knobs. I look forward to the photos of the completed transformation. xx

Nice Mr E that he picks up on hints like that!!! It will look lovely with all those pretty knobs. Good TV or chatting job to wind all those threads.

Grateful that, in addition to being clever yourself, you are married to a clever partner who can effect such miracles. Looking forward to seeing the completely finished project!

Looks like a nice sturdy chest of drawers and your color choice is perfect. Looking forward to seeing it all dressed up with fabric lined drawers and fancy drawer pulls. :)

Looks like a miracle makeover! Those knobs are fabulous, what a find.