One of the designs my Stitchery Club members will receive on Friday is this one, "breathe deep and let go"... 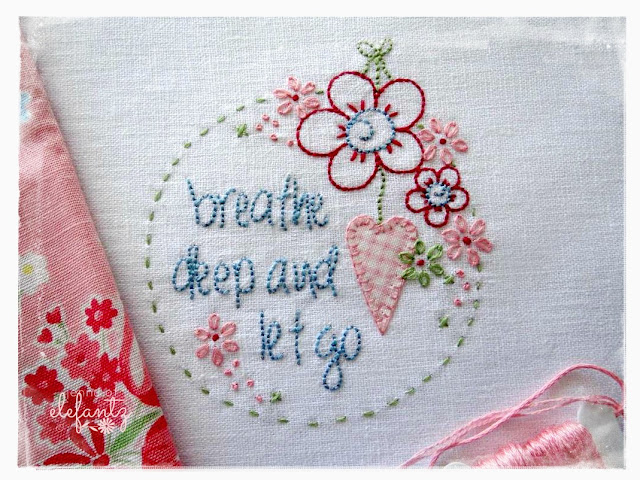 ...and this little tutorial will be included in the June issue, as well as here today.

I chose my threads to blend with the fabric on the left, a linen from Lecien's 2013 'Old New 30's' range, and my plan was to frame the block inside it.

This project follows the same process as a tutorial I shared back here, but instead of making a pincushion using a small square of fabric I had to make sure my fabric border was large enough to wrap around a rectangle the same size as my frame's aperture.

Idea: If you have circular stitcheries gathering dust this is a great way to use them!

After stitching the design choose two pieces of fabric which will blend with the stitchery and lay them in front of you, right sides together with a wrong side facing up at you.
The size of your fabric pieces must be at least 2" larger than your picture frame backing board.

Using a pencil or erasable pen trace a circle onto the centre of the top piece of fabric, making sure it's larger than your stitchery. You could use a plate, a mug, or a quilter's circle template - whatever you have on hand.
(I will be including a template with The Stitchery Club pattern)

Carefully stitch the two pieces of fabric together, then cut away the centre about 1/8" inside the machine stitched line... 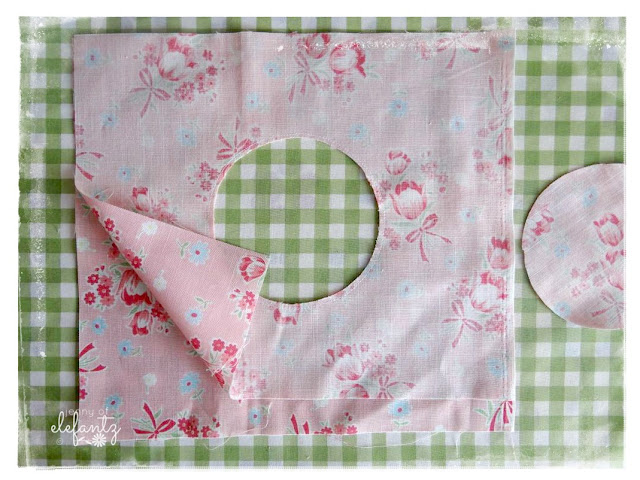 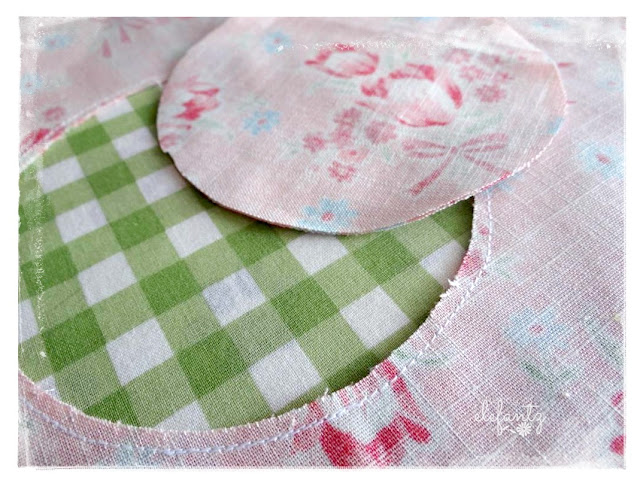 With small sharp scissors cut little notches around the inside of the circle but avoid cutting through the machined seam.

Pull the top piece of fabric through the opening and press the seam with your fingers before ironing it flat... 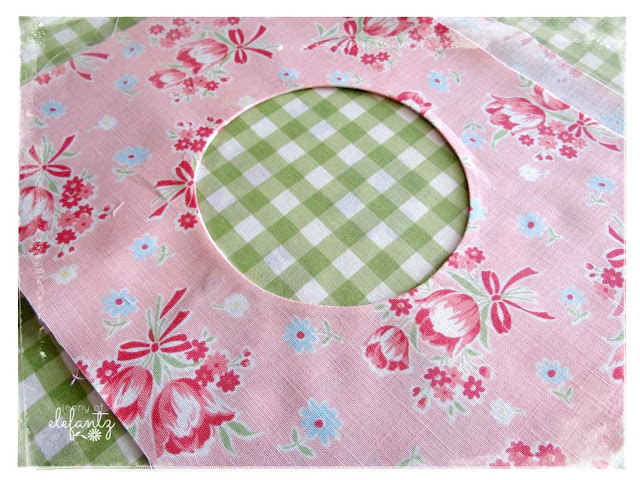 Place the stitchery behind the circle opening and pin in position... 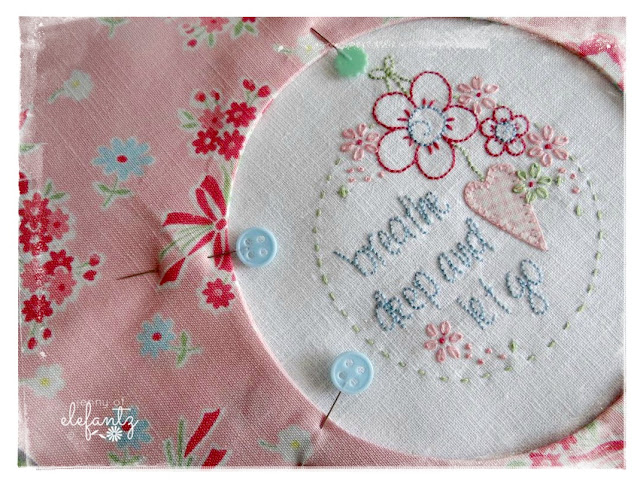 Using two strands of embroidery thread, sew the stitchery to the window with a line of running stitch. I chose the same pink thread I'd used in the stitchery... 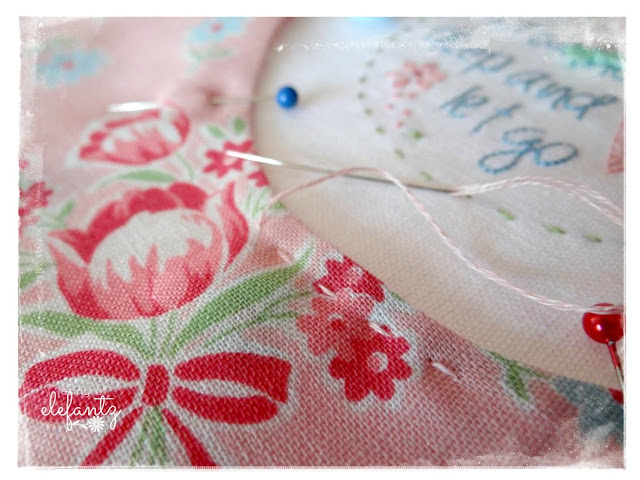 Turn the window over and trim away the excess stitchery fabric so it's about a 1/4" away from the line of running stitch... 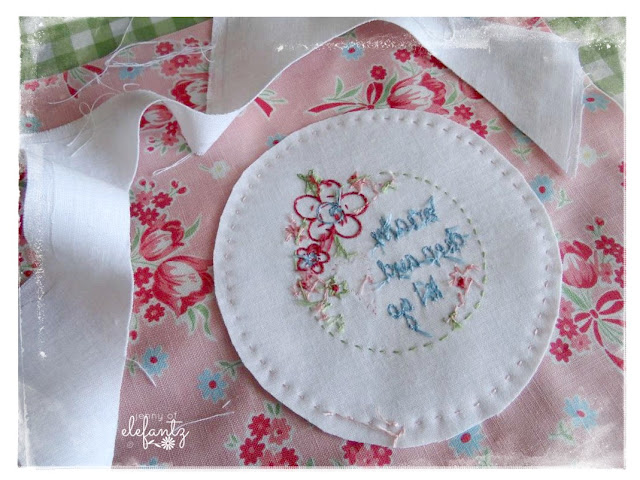 Remove the glass from the frame and use it to trace around a piece of fusible Pellon. Carefully position this behind the stitchery window and fuse in place... 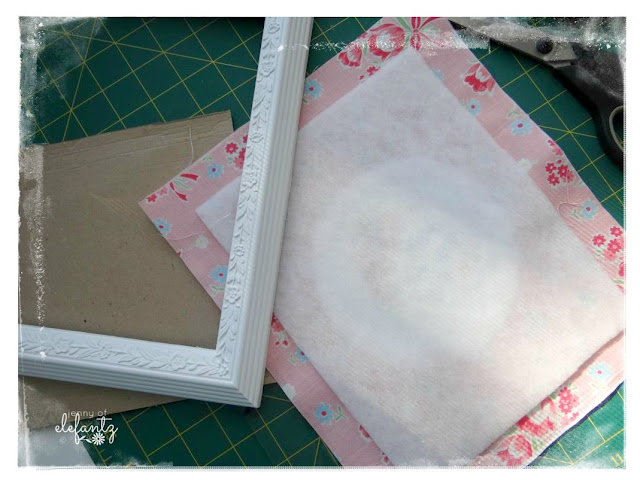 NOTE: Before going any further I added six small pearl buttons around the stitchery window.

Cut a piece of cardboard, not very thick and the same size as the glass, and wrap the fabric window around it. Using a strong thread like Perle #12 cotton, lace back and forth to secure the fabric around it.
(I have a tutorial for this back here if you need it) 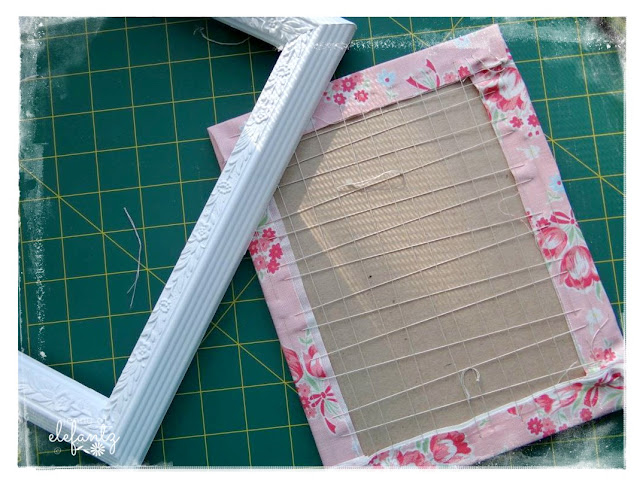 Place your stitchery inside the frame, replace the backing board, and safely dispose of the glass.
You now have a sweet stitchery framed inside a window! 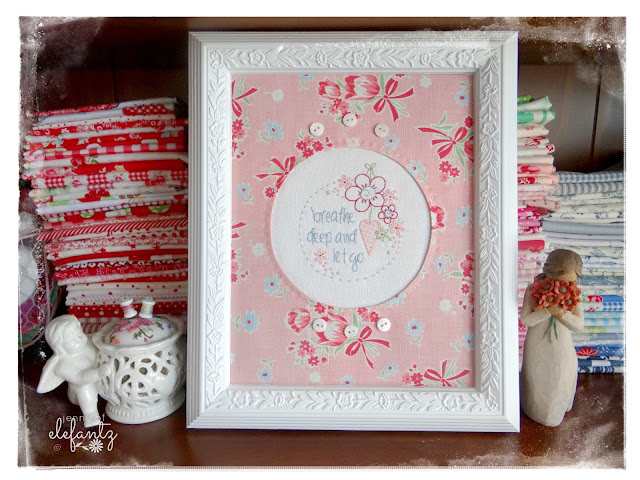 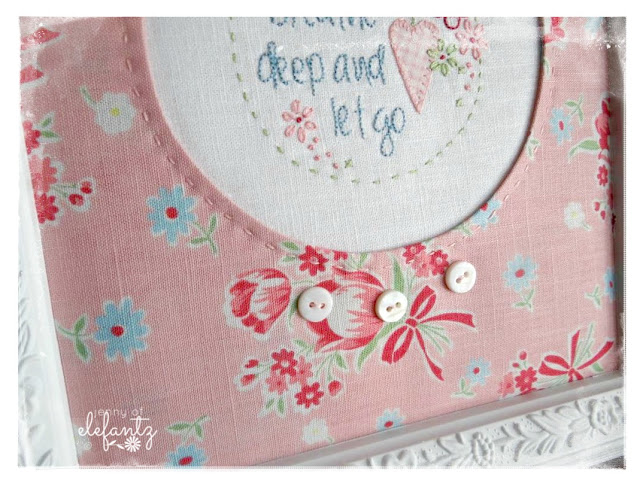 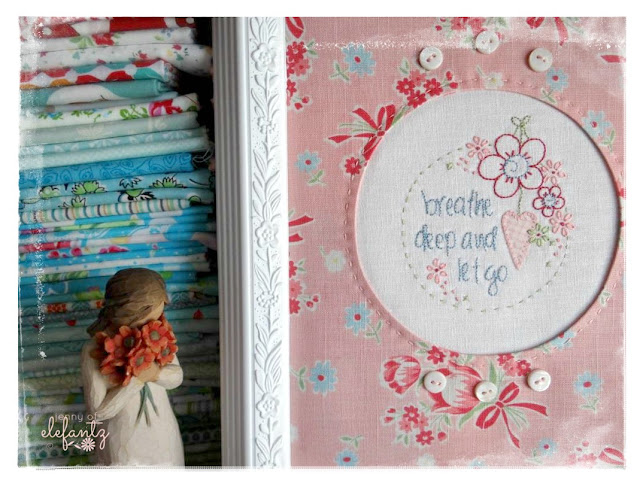 There's still time to join the Stitchery Club this month, memberships close on June 16th.
All information is here, plus a free pattern as well.

Today it's finally under 30C (86F) which could mean winter has come to Townsville at last.
There's even rain, and those gentle pitter patter drops on the roof are soothing me to the point of just wanting to lay on the bed and escape into a good book, but that will have to wait another day as I have patterns to write this afternoon and weekend washing to do. Fortunately the un-seasonal rain is supposed to hang around all week so I will pencil in a slumber day for tomorrow and maybe get a big pot of soup going in the crockpot.

Ah, the crockpot...one of the things I love about winter in the tropics.

Have a wonderful week!
hugs

Posted by Jennifer Reynolds Jenny of Elefantz at 11:33 AM
Email ThisBlogThis!Share to TwitterShare to FacebookShare to Pinterest
Labels: The Stitchery Club 2016, tutorials, tutorials 2016

Jenny, your imagination is amazing! Thanks for the wonderful idea. I have so many designs from you and others that are round and would look great using this method on a quilt or wall hanging. Hope Blossom and her baby are doing well. Not much time left before you can hold a new baby. Also hope that Aisha and her baby are well and that you will be able to see them before the baby gets too big. Thank you for sharing your talents with us!

Your friend across the Pond. May the Faeries Shine Upon You and Yours! Cynthia

Very very pretty! Jenny do you use Acid free cardboard?

What a beautiful way to finish an embroidery. I will have to remember this. Just a word of caution: make sure the board that you mount the embroidery on is acid free. I'm told if you don't use acid free boards, the chemicals will eventually eat away and destroy the fabric.

Fantastic idea, thanks so much.

A beautiful stitchery and a lovely tutorial - thank you:)

Good Morning Jenny! This is another delightful embroidery pattern that you have created. It amazes me how you come up with these beautiful designs each and every week and I know you also design for other magazines. So you have got to let your art ideas become realities right away. In whatever manner you are able to create all of these spectacular designs, I am so thrilled and honored that you share them with us! Thank you for creating the embroidery pattern, putting it into an excellent tutorial and sharing it all with us! Have a fantastic creative day!

Endless creativity! You've sure got it!

Winter - lovely sounding, but not much cooler than here, today. =) Enjoy the lower temperatures for the next few months. This is a wonderful idea. Actually, I saw something this weekend for a quilt block which really would work well with this, too. A lot of your small stitcheries could be circles like this. I'm going to experiment, just as soon as I get to breathe again - before I let go. LOL Thank you so much, Jenny. You always have such wonderful creative ideas. You've influenced my stitching life, and also my personal life. I appreciate all you are and all you do.

Beautiful idea, and work as usual. Thankyou for sharing.

Yes telly depresses you. We are fed up of hearing all the arguing about the EU referendum it dominates everything. It's brought out the worst in politicians \\7 people. Just wish it was all over with.

You are so creative and talented!!! Love this way to use your beautiful stitchery! Now, can you put your creativity to use and help me figure out how to use my mother's old scarves and hankies to make some quilts for my daughters?? Nothing like being asked to help with something way outside your creative zone!!! I think some of the hankies can be made into blocks just like you made the picture frame...hmmm, perhaps the scarves could be handled the same way!! I'll let you know if any of it works!! Definitely will have to be wall hangings - don't want them washed too often!