Having confidence in tweaking...

Now this 'feeling' is not new to me as I also felt that way back in the early years when I was teaching myself to embroider and quilt. I first began to teach myself (and Blossom) through craft magazines late in 2005, and for the next few years I made almost 'carbon copies' of the patterns which caught my eye.

By 2008 things began to change and my 'brave' muscle was flexed as I began to tweak both fabric colours and thread colours. Early 2009 and I was brave enough to begin designing my own freebies to share here on the blog.

You see, it's a process. Like learning to bake a muffin. You begin by following every measurement and ingredient in exact proportions to the original recipe, but as time goes by you ditch the recipe and set forth tweaking flavours and using a variety of ingredients you love to create new and delicious muffin combinations.

Another thing that comes in to play when you're nervous about making changes to an original design is that sometimes you miss or look past something which just may have caught your eye if it was made in fabrics that are close to your heart.

An example of this is a pattern of Allie's I made this week.
Allie's style is more folksy than mine, and she uses solids as well as prints in many of her patterns. Now, I'm being honest when I tell you that I *love* her designs and the unique way she can make simplicity incredibly fetching to the eye (and the heart). Over the years I've taken time out from my own work to indulge in the pleasure of making a few of Allie's patterns and each one is quite different from her original...yet it's still obviously her design.

Just as Allie proof reads my patterns, I in turn get to proof read hers - the bonus being we both have all of each other's patterns before anyone else does! You may not know it, but Allie has just launched her own monthly club, the Applique Club (you can read about it HERE) and it was one of the patterns in her first month's issue that I got to play with this week.

Delving into my stash I chose fabrics very different from Allie's original. Colour is needed in my home and in my life so I think you'll agree my version of her Prim Flowers Wall Hanging ticks that 'colour box'... 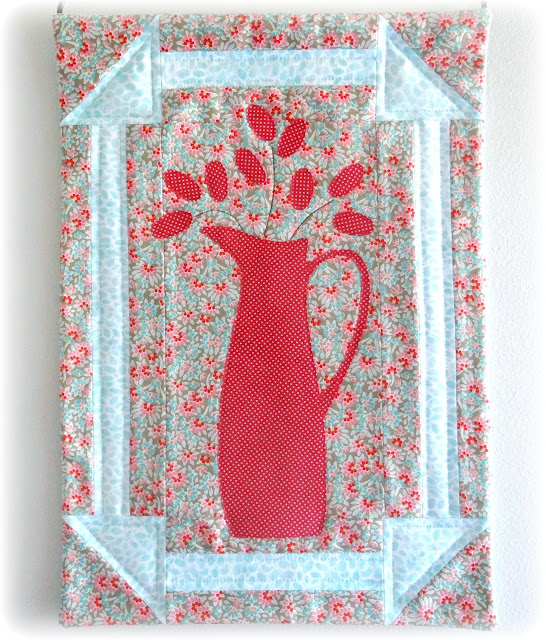 I'm deliberately showing you my tweaked version first because I wanted you to 'see' what I saw in my mind's eye after a first glimpse at Allie's original (below). 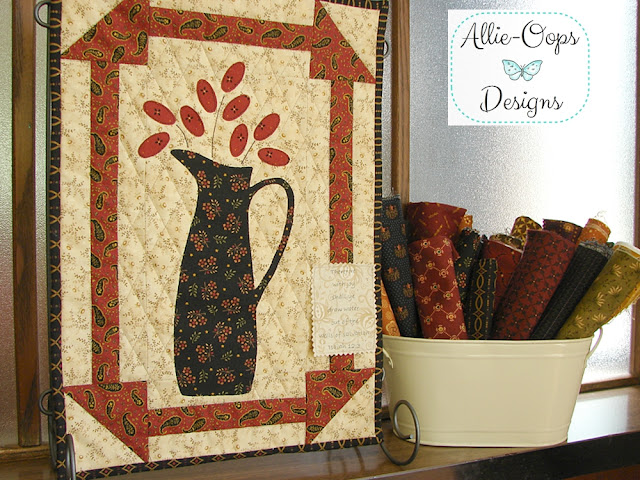 That gorgeous jug, the elongated churn dash (which you KNOW is my favourite quilt block)...I swooned and declared to her, "I must make this!"

Now you may look at my colourful version and say "oh, no that's not me" but fall in love with Allie's prim folksy palette, OR you might not be sold on either version because you're a girl who plays with batiks or 30's repro or shabby chic or wool felt or something else completely different.

The thing is, almost any pattern can be made in fabrics *you* love.
So if you've held back from sewing or stitching particular designs, even though there's something about a certain pattern that has caught your eye and you can't stop thinking about it, flex that 'brave' muscle and give it a go, make it your own.

My version of the "Prim Flowers" wall hanging by Allie-Oops Designs now adds colour to the greenery which dominates one side of our front entrance and makes my heart happy as can be. 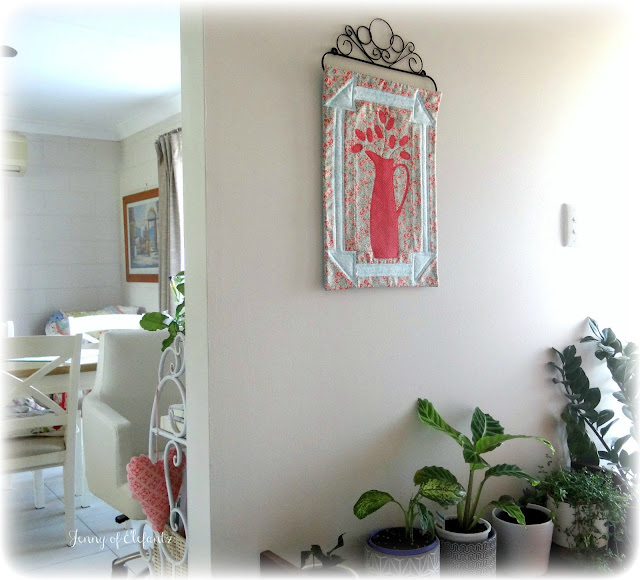 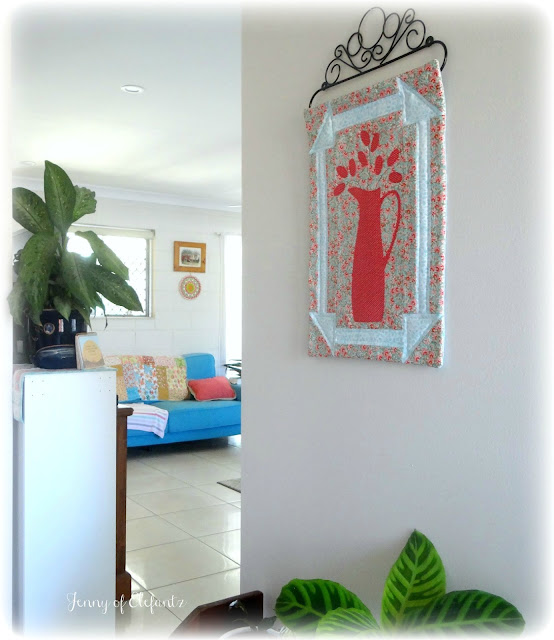 There was one other change I made to Allie's pattern. Her version has binding but I chose to finish the wall hanging envelope style instead. 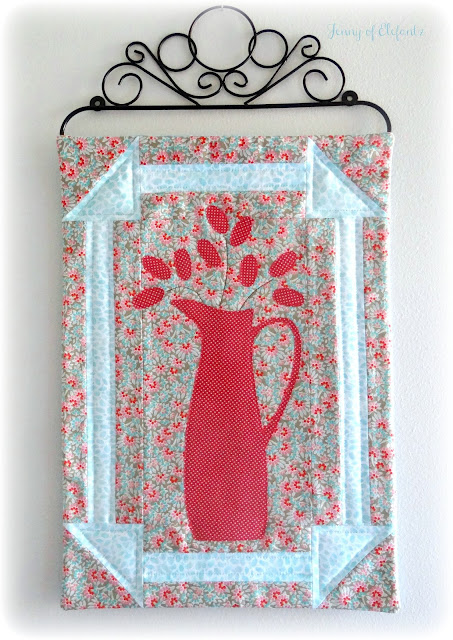 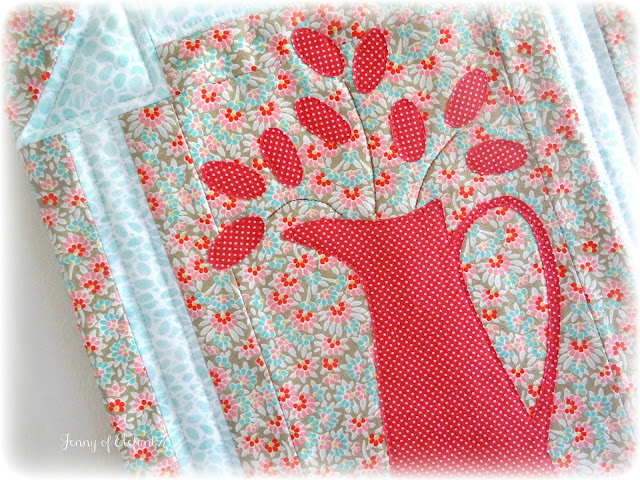 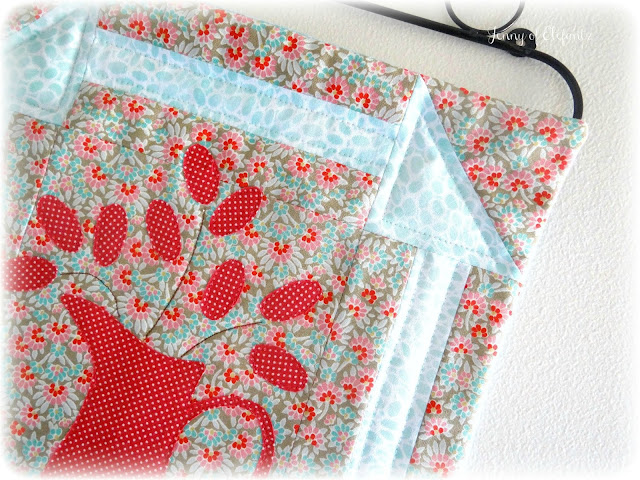 Allie's pattern includes an optional Scripture verse which is a separate stitchery pinned to one side.

Just for fun, if you were to make your own version of Allie's "Prim Flowers" what style/colours/fabrics/tweaks would you use?

If you'd like to see all three applique patterns in Allie Hartom's new Club pop over here and have a peek.

I'll be back tomorrow with that long overdue tutorial I promised a couple of weeks ago, and yes, finally, that Cinnamon Scroll recipe!

May your blessings flow freely like a bubbling brook in spring and all the work of your hands prosper to the glory of God,

It's a bit harder to tweak things with cross stitch - I buy kits because I love the pictures. But when it comes to paper craft, I will generally tweak something, even if I purchased a kit. I'll choose a different background paper, leave out a decoupage layer if I find it getting too high or the layer just doesn't seem to make sense. I also like to leave more 'white space', preferring the simplicity of one feature with little (or no) embellishment. Blessings!

Love yours and Allies version of the appliqued jug...But the pops of bright color really appeal to me...I am a bright colorful person...My sister once told me about 20 plus years back that I could make anything look good I was wearing no matter how bright it was...lol...I take it my outfit was a tad loud that day...Hugs and prayers winging their way to you. I hope Dear Blossom is doing better...Still praying for her.

I adore it, Jenny!!!! I remember once you saying that a big part of the thrill of being a designer was seeing how others make your patterns their own - and I agree wholeheartedly! We provide the starting point, and seeing what others do with it is incredibly thrilling. Your version is bright and lovely and compliments the greenery so well. I adore your entrance-way and only wish I could walk through it someday!!!!!! Love you my precious friend!!!!!

I love the colors you chose.

I confess that I am a tweeker of most things I make. I, too, NEED color in my life. Since I could hold a crayon, color has been in my life. I also tweek according to mood. I do not have a dominate color choice, but there are colors I do not fancy. I think I tend to notice colors many designers are drawn to and tend to use frequently. I really like that you did not choose to use a border. I like them, but it is refreshing to see your change. I tend to gravitate toward colors depending on season. So since it is Summer here right now, I may choose coral, white with a little bit of mint green and some ivory. And definitely, no border.

I am so glad that you said this as I often tweak your designs, changing colours or using parts of them or combining them. Sometimes I have felt a bit guilty as it feels like maybe I don't love what you do which is not true at all. I am glad that you encourage us to do that. Your wall hanging looks beautiful and I love churn dash blocks as well, they make such wonderful frames for embroidery!
Love Alison

Interesting how our tastes change with the influence of years! I used to adore autumn colors...now I really don't like them at all. I'll use browns, but pair it with black and gold. I rarely use oranges or yellows in my quilts...and quilts made with "autumn colors" don't appeal to me unless I can visualize the pattern in other colors!! Love your version of her flowers in a pitcher.

Never feel guilty about altering a designer's pattern to suit yourself. That's part of the creative process each of us can enjoy. :-)

Hi Jenny - I love them both!! I used to decorate in quite a primitive, muddy coloured style with lots of warmer colours & wool felt so I think Allies version would be perfect for that. But now I choose a lighter more vintagey style to go with all my pastel china & things. So I would choose your style. Its fun to see the both versions ... thanks for this post Jenny as I too struggle to venture off & do things in my own colour ways.

AAAh Jenny, This was quite amusing to me - I have never been afraid to mix it up and change patterns colours etc....in fact I am having a hard time remembering anything that I have made strictly by the pattern - one comes to mind but it was a kit and laser cut pieces - and even for that I changed one sashing. I love this design of Allies - but it would have colour in it - green for leaves and an interesting print for the vase and a soft / pale background....very different to both.
And I do love envelope style on small wall hangings.

This is pretty, red and aqua are my very favourite colour combinations for fabric. I always like to see projects done in different colours, it is much more inspirational to see it being branched out different ways. x

I love both versions Jenny - it's always good to see how different a pattern can look in a different colourway. xx

Both versions are lovely. I have always made things using my colours but I am often inspired by the fabric choices of others.

I liked all of Allie's first month of patterns, of course, but this one is also my favorite. I like both of your versions equally, but my own will probably be a little different ... and being split-personality quilter, I could make several versions! Definitely a batik one, probably Civil War Repros, too, and I think it would be great in red/white/blue fabrics, too. A good design looks good however one interprets it!