The joy of children...

Back in early January my husband came across a Gumtree listing for a very neglected and ramshackle cubby house. He had a vision for what it could become and though to my eyes it looked like a huge task and probably not worth the effort, he was sure he could create something beautiful for our granddaughters.

The past two weeks have been our winter school holiday break in Australia and even though we'd both come down with head colds and hubby had a cracked rib his vision for this cubby was about to be realised.

After working in the garden, repairing plumbing and doing various other home maintenance tasks during the day he would spend the evenings at the cubby. After cutting wood and repairing the structure of the old cubby he began the process of painting. I chose the green as an accent to the brown he'd painted the outside walls, and to be honest that's all I did - the rest was all his labour. 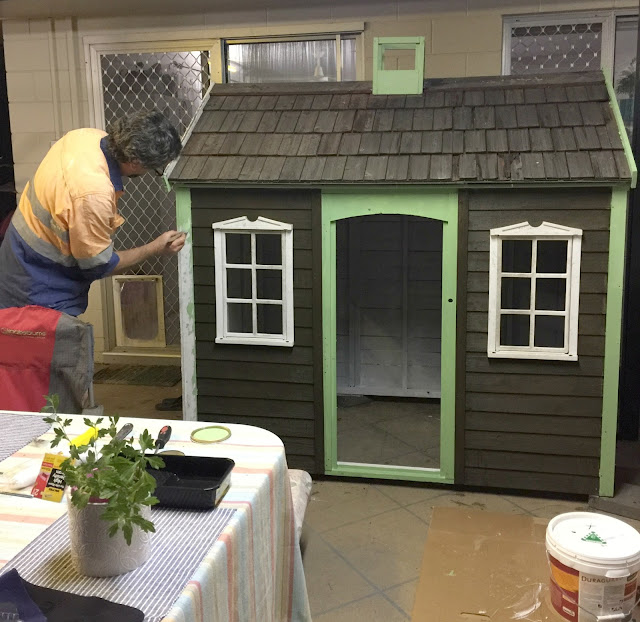 And of course, every good Poppy deserves a cuppa when he's finished a big job, right?
I sent this photo to Cully May and Rafaella and they were so excited to see the cubby finished and wanted to come have a cuppa with Poppy right away. 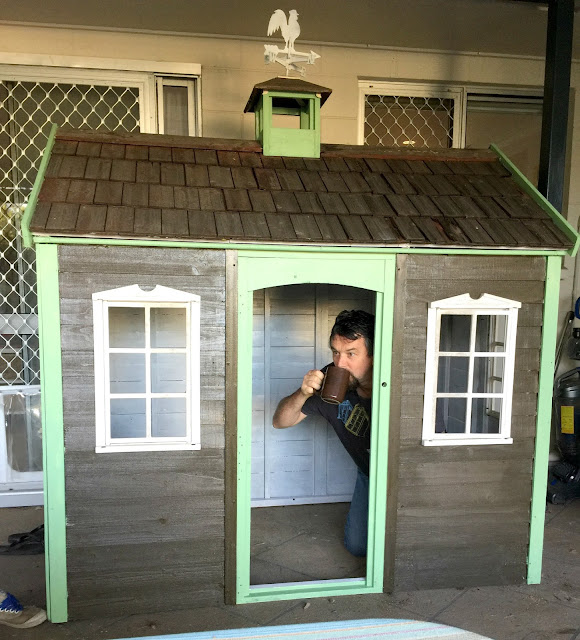 But first Nana needed to do a bit of shopping for furniture and homely items!
Of course that was a lot of fun for me, but as the kitchen set up and the table and chairs were all in flat packs my sweet husband had to spend yet another evening putting them all together, bless him. 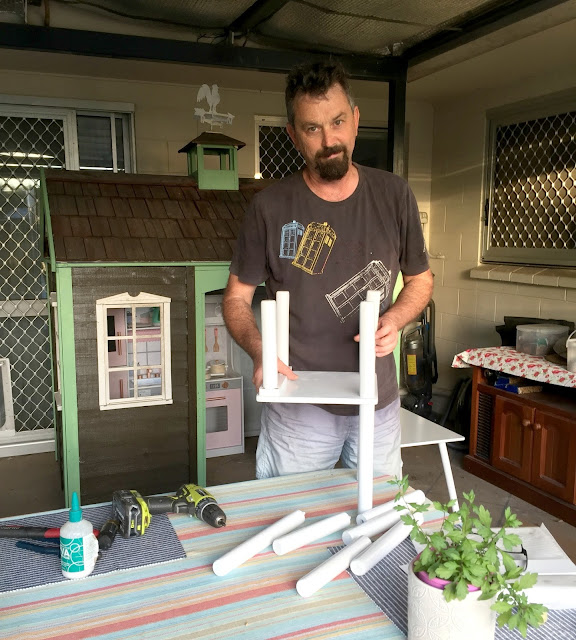 Next morning with everything in place (I have yet to get fabric for the curtains but that will happen next week as Cully May insisted this was most important) we waited for the girls to arrive... 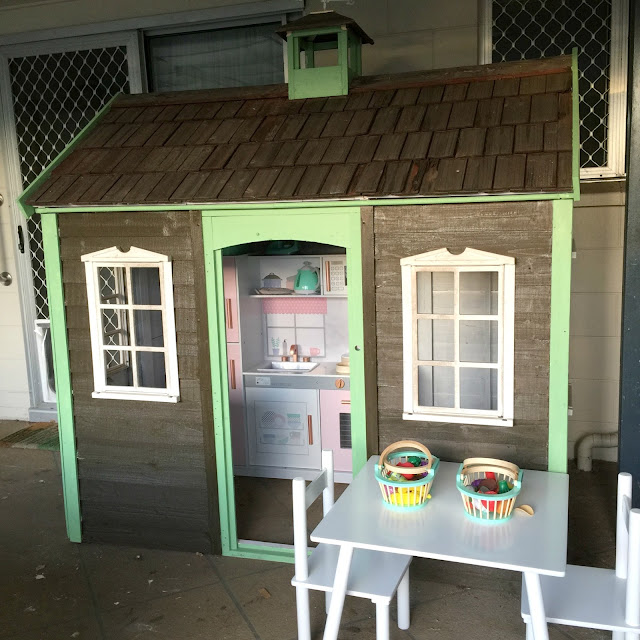 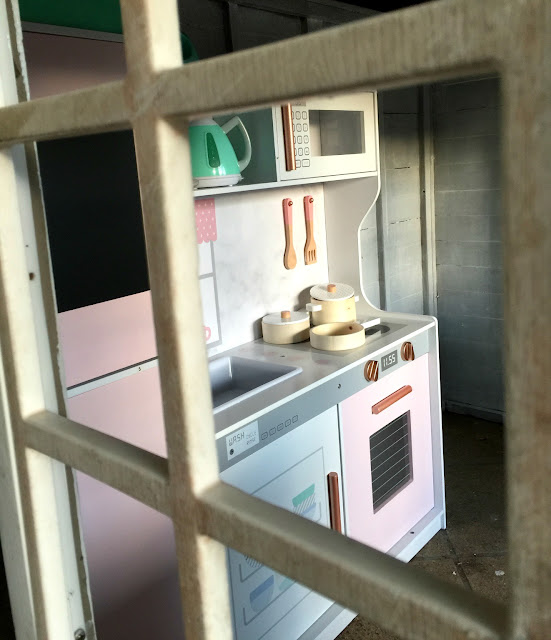 Let me tell you that Blossom was just as excited as Cully May and Rafaella (brought tears of joy to my eyes) and we both thought it best to share a video with you because photos cannot express accurately the sheer delight of young children the way 'being there' can...

The rest of the morning was spent playing house, having cups of tea and every so often following Poppy around the garden or checking up on what he was doing in the shed. 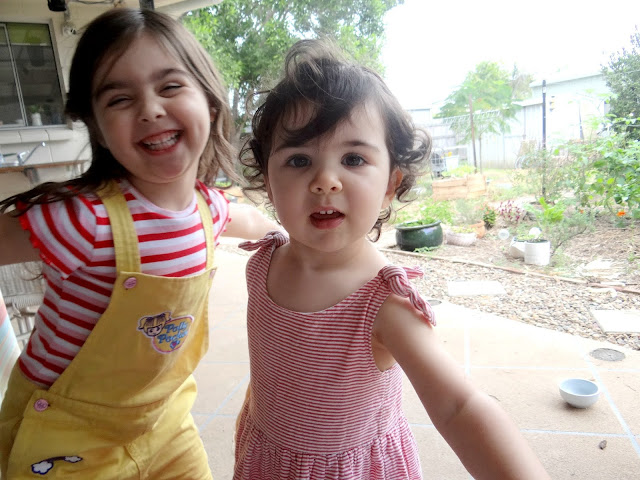 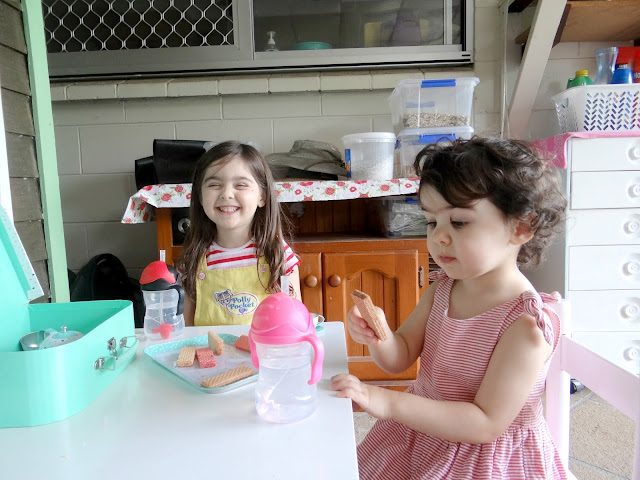 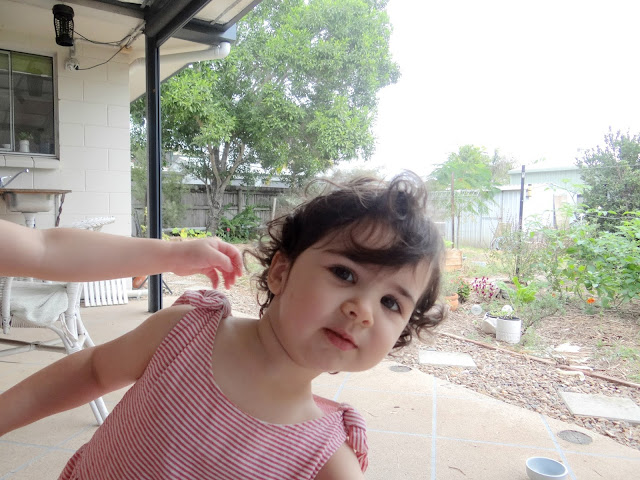 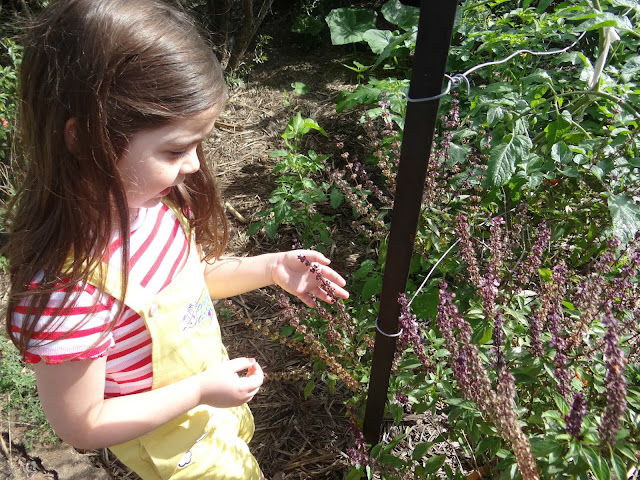 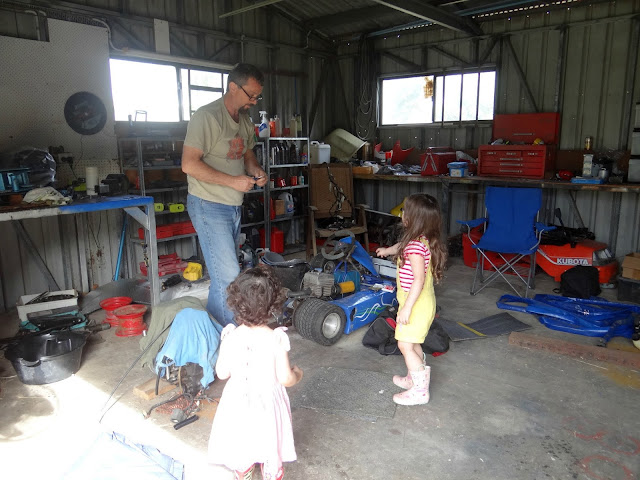 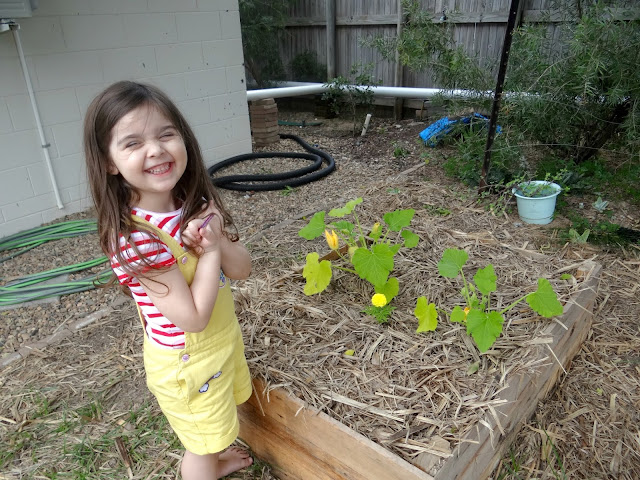 They collected chook eggs, ate tomatoes straight from the vine, cuddled next to me on the outdoor couch for a story, ate lots of fresh scones and wafer biscuits, had a second cup of tea and generally wore themselves out.
After Blossom and the little ones left for home (and being promised they can come back and play next week) Nana and Poppy had a nap, our hearts happy and content.

I sat outside by the cubby this morning with my coffee and Bible, pondering the joy my granddaughters had so freely expressed the day before, and considered how I need to express more delight before my heavenly Father in the same way.

Mr E is back to work on Monday and life will again slip into the habits of a new school term. At home I'll allow the gentle routines and rhythms of homemaking, design and family to flow again until our next term break in October.

Next week I'll do a catch up post with what else has been happening lately and a sew along project you might want to join me in.

Posted by Jennifer Reynolds Jenny of Elefantz at 10:34 AM
Email ThisBlogThis!Share to TwitterShare to FacebookShare to Pinterest
Labels: Blossom and her girls, cubby house makeover, Cully May, Rafaella

Such fun!! And what a blessing. So glad you can enjoy such precious time with your family.

How wonderful for the girls. Great job Poppy!

What fun memories they will have in the years to come. It is so cute.

Even though those gorgeous little grandaughters to yours are oceans & miles from me here Jenny - I can't tell you the pleasure & joy their little faces bring me. Thank You for sharing them with us all Xx

How cute! Grandchildren bring such joy

Hi Jenny,
What fun! Lots of joy to be had at the cubby house! Does it have a name?
Have fun decorating it with fabrics!
The video was great to watch :)
Enjoy the weekend!
hugs,
Joanne

What an adorable little playhouse for your granddaughters! They are just the cutest and I love Cully May's overalls and Rafaella's dress. I love all the little touches you added to make it feel like a real house and I'm sure some lovely curtains would just be the cherry on top. Thank you for sharing this bit of joy and sweetness today!

Wishing you a beautiful weekend ♥

Oh my, they are adorable. They must give you so much joy. x

Such a joy seeing the girls' delight. They will want to stay at your place lol. Such a great job hubby has done. He must be so pleased. Can't wait to see the curtains.

So lovely. There is such joy in creating "role play" materials for young children to enjoy. I'm loving the opportunity to spend more time with my granddaughter right now - a totally unexpected side effect of lockdown

What a lovely way to spend a day x

Love, love what you created for your little granddaughters! Oh, the joy and sweet memories this will become in their hearts and minds for always. So much fun!! I always find - the joy we give to others, always comes back ten-fold :)!

Oh this post brought so much joy to my heart (and was sorely needed this week). Thank you for sharing, especially the lovely smiles on the children's faces as they enjoyed their new cubby house.

He did a wonderful job! The girls will always remember this special gift from their Poppy.

The girls look so very happy with their cubby. The video was so fun! What a wonderful gift from Poppy - and you, of course. I'm sure it was fun to furnish. Have fun making the curtains. Thanks for sharing.

My parents built a playhouse for my children. It was so cute and they spent years playing in it. When they grew up and had no use for it, I cried. It was such a wonderful time in my life, being a young mother with three under 5, that I just hated to let it go! What a joy it must be to share such excitement with the grands!

I am very grateful that you have shared this beautiful family video. The smile and joy of your precious granddaughters has made me very happy. They have reminded me that God is everywhere, in a little toy cabin too.
I congratulate your husband. He has done a wonderful job. A little house that has been filled with love in each of the repairs. I'm glad the cold is gone. A big hug. May God bless each and every one of you.

Oh my goodness, I played the video twice and just kept smiling through the whole thing each time! Although I could definitely imagine their delight, it was so nice to see and hear them. Thank you so much for sharing your beautiful grandbabies with us today. This post really lifted my spirits.
Kathleen - kakingsbury at verizon dot net

Mr E made a wondeful job of that project - and the girls smiles, as always, are delightful. xx

What a fun place for the girls to play! Mr. E did a great job on that house! He is such a talented man. You both have many talents between the two of you. I loved the video of the little girls. Fun to watch them being busy.
That's the life! So pure and good. Lovely post.
Be well, Jenny.

Sheer joy. Thanks for sharing.

Thanks for sharing the video. All of the love Poppy put into the little house shines through.

How darling are these girls! They have grown so fast. Thank you for sharing the video. Reading your blogs and following you on social media makes me feel they and you are like family. Cheers to you and God bless you and them.

Thank you so much for sharing the video. Cully May is quite a chatterbox, isn't she? Their joy in this simple cubby house and kitchen will last a long time, and Mr. Elefantz had a wonderful idea. Thank you for sharing your delightful family, and the spiritual conclusions that came from that wonderful day, too. Love you, Jenny!

Hello Jenny, congratulations to Poppy for creating the greatest gift, the joy on your grandchildrens faces was brilliant. Loved the video, I felt like I was there with them. God bless you all. Love Mandy xx

Your granddaughters are adorable. The video really cheered my heart!

What a fun experience - redoing the shed - and outcome for all of you! The little house is absolutely charming, and the grin on Cully May's face made me cry, as did her calling you "Nana." I'm a Nana too, and miss my grandchildren so much! (Curse this pandemic.) I'm happy for all of you to have this joyful celebration.

Those two cuties are very lucky little girls to have grandparents like you. What a darling house .

I thoroughly enjoyed the video of your grandchildren playing in their new cubby house. That is going to be a memory they will carry with them all their life and I am sure that they will get many hours of enjoyment out of it. It was sweet to hear the excitement in their voices and I enjoyed hearing your voice also.

Oh that was absolutely wonderful. What a lot of work went into that house but worth every minute from their delight. I loved watching them tidy up by stuffing everything into the cupboard. Just like me!
It was lovely to hear their voices and yours too. I think you enjoyed it as much as they did. I see many hours of enjoyment in that house well it's like princesses in their palace I think. I liked the Cubby House name, never heard of that before, but I have heard of a cubby hole.

Jenny, thank you very much for sharing the joys your granddaughters had over the cubby house. It was so lovely. Congratulations to your husband on doing such a good job. Denise

How blessed you and hubby are to have such beautiful grand daughters! They look like neat knicks! Great video! Everything in order and has a place!

This is so wonderful. You're all so blessed to have one another. It's the little things. Even being able to visit someone. Back in lockdown here and I can't see my mum. She's 85 and it is hard for her (and us). I just love seeing the smiles on the girls' faces. So cute.

Hi Jenny, long time. Your granddaughters are absolutely precious. And the cubby house is so very exciting. They were both sooo busy arranging and rearranging. Thank you for sharing your dear family. The video brought a smile to my face.
Love, Tay

What a wonderful place you’ve both created to share imagination and joy with your darling granddaughters!