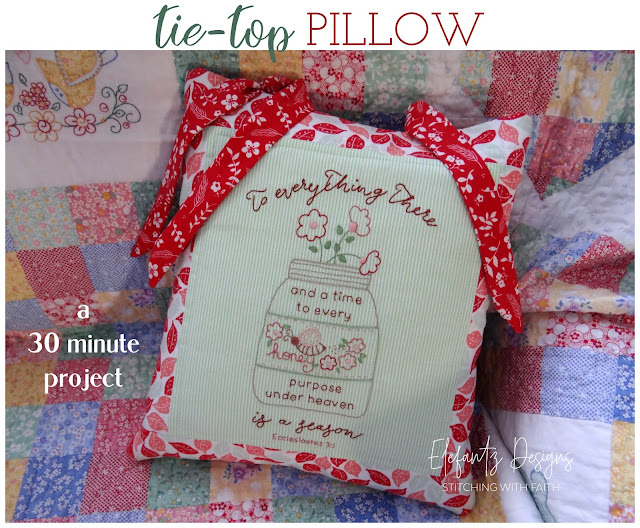 If you're like me (someone who loves to embroider and has a huge pile of completed stitcheries packed away in a large plastic tub in their sewing room) then you're probably often on the lookout for simple project ideas which could delightfully feature a few of those orphan hand embroidered pieces, right?

This past year I've made three tie-top pillows from some large stitchery blocks and every time I've been incredibly happy with the final display!

As many of us are now in gift-giving mode and perhaps don't have too many pennies spare to go shopping this Christmas season, I thought it would be a good idea to share a simple tutorial for making  your own tie top pillow from one, two, three or a dozen orphan stitcheries. Now, I only use fabrics which are already in my sewing room and I encourage you to do the same because apart from purchasing a basic cushion insert for a few dollars the rest of the pillow project won't cost you a cent - though it will require half an hour of your time.

The stitchery I've used for my latest pillow is one of three in December's "Faith In Hand" set (over here) but you could use any stitchery you like - in fact if you're more of a patchworker or English paper-piecing gal either of those would work just as well.

I'll share the measurements for my pillow, but you'll soon see that it's easy to use any measurements depending on the size of your pillow front.

For this pillow I trimmed the stitchery to 8.5" wide x 9.5" high and bordered the block with 2.25"wide lengths of leafy fabric. This gave me a pillow front of 12" x 13" which I then fused Pellon behind and machine quilted in straight lines (you could use quilt wadding, but I had odd shaped pieces of Pellon in my scrap wadding box and chose to make use of one)... 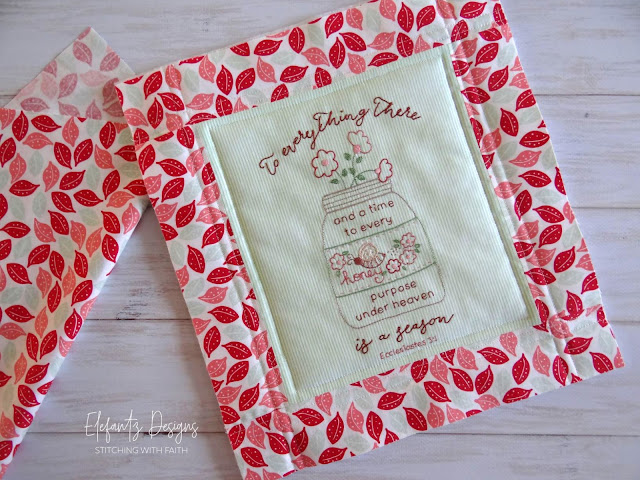 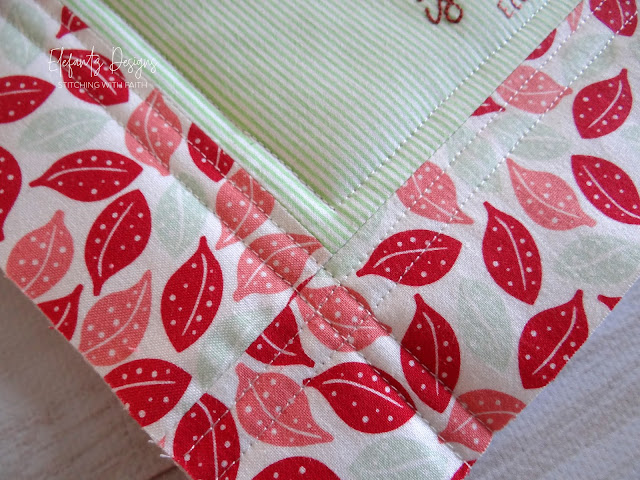 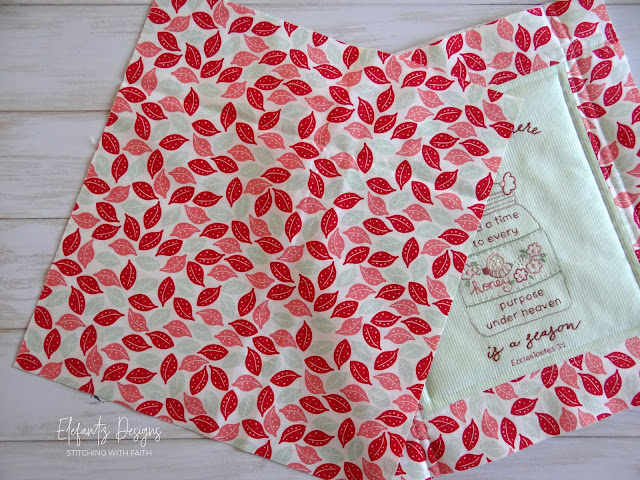 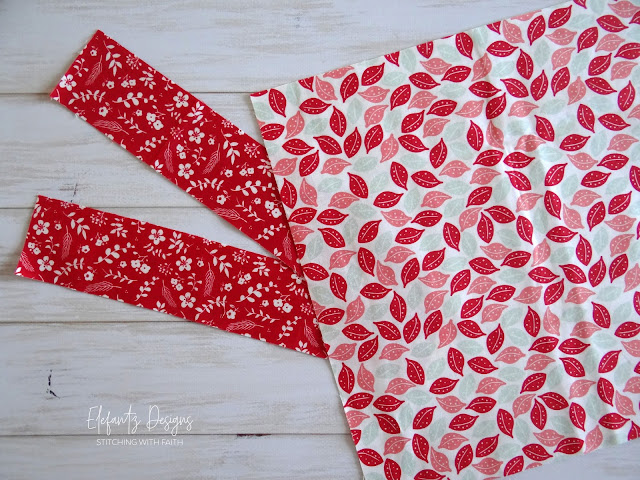 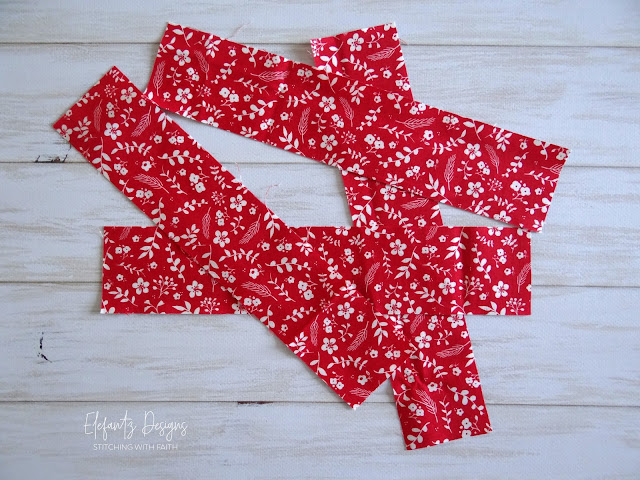 We need to make the ties before we go any further.

Fold each of the four ties in half along their length. Sew across one narrow end with a curve and continue down the side with a 1/4 inch seam  - leave the remaining narrow end open.

Trim away the excess on the curved end. 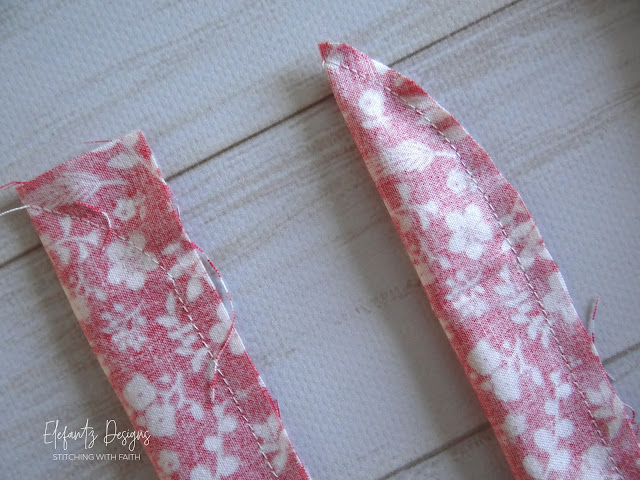 Turn the tie right side out and press flat. 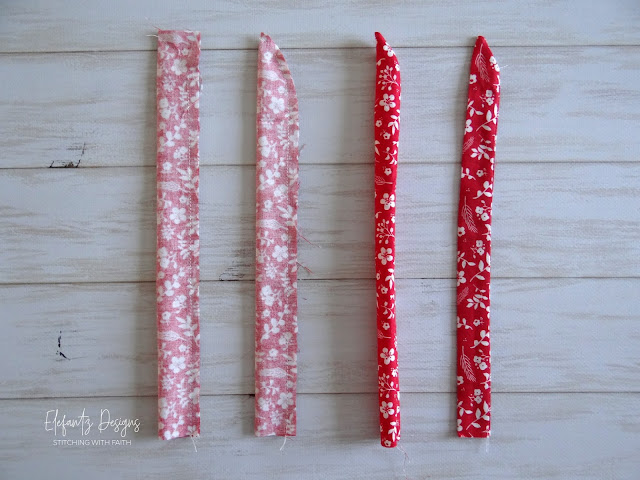 Pin the raw end of each tie to the top edge of the pillow front and back. Mine were spaced 3.5" apart. 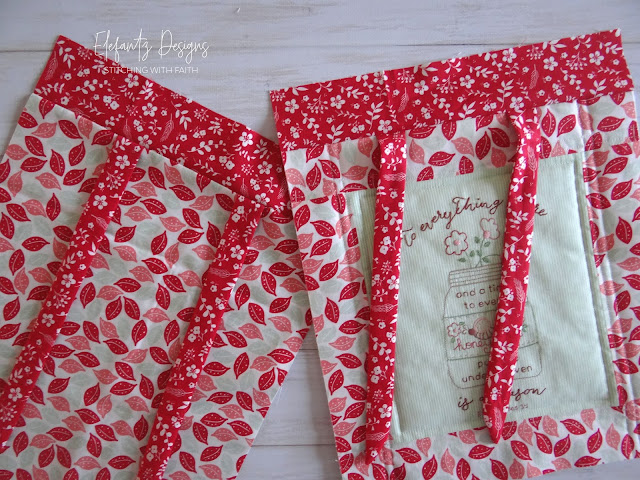 Lay the front and back of the pillow right sides together and sew around the sides and bottom with a 1/4 inch seam. 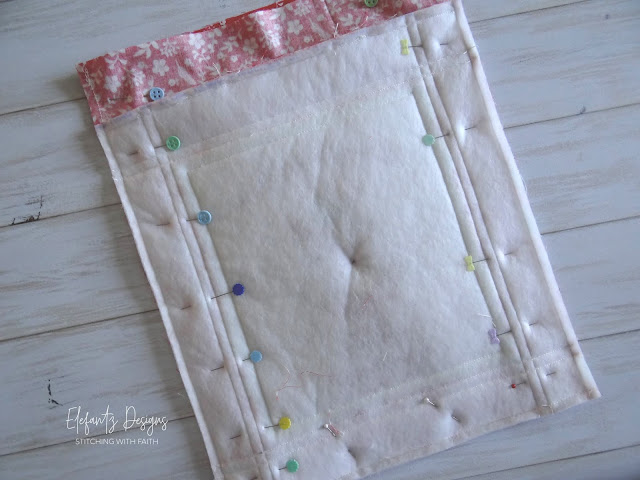 Fold a double 1/4 inch hem along the raw edge of the contrast facing fabric and sew in place. 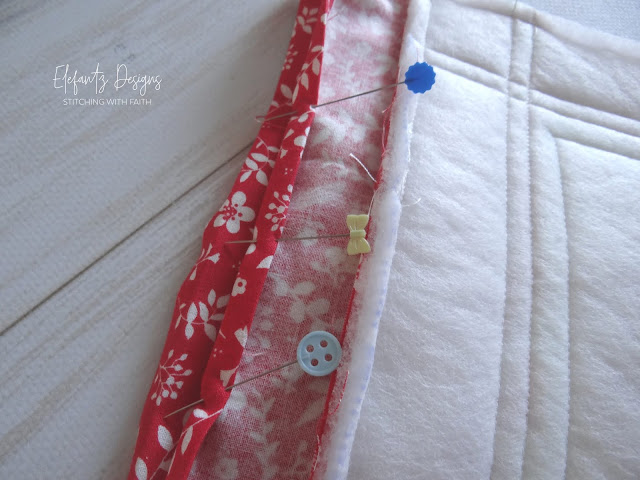 Turn your pillow right side out, pushing the contrast facing inside and pressing the ties away from the pillow. 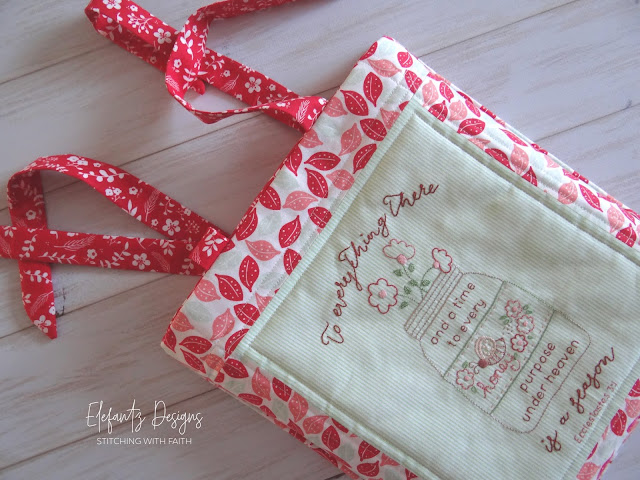 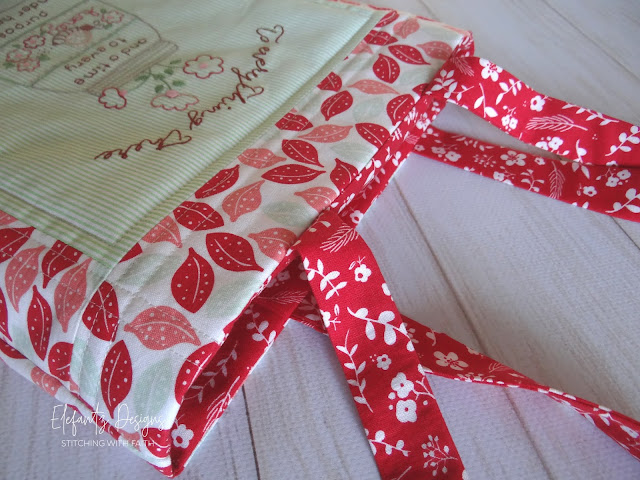 Now all you need do is pop in an inexpensive cushion insert (I buy mine at Spotlight), tie the top, and you have a really cute tie-top pillow to keep or gift.

I usually tie bows across the top of these pillows but for this one I liked the dangling ties. Do what you love! 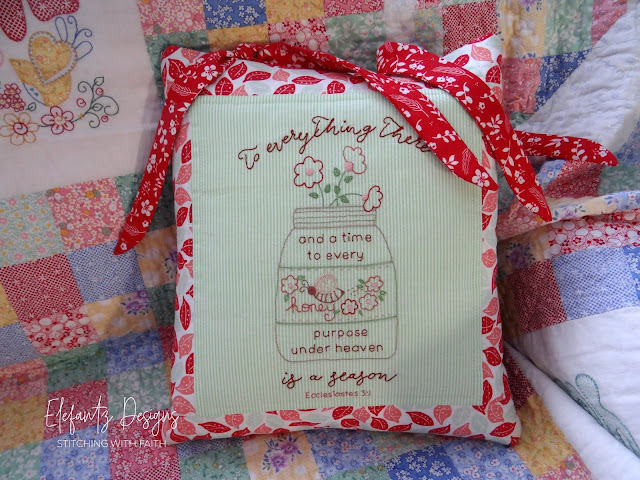 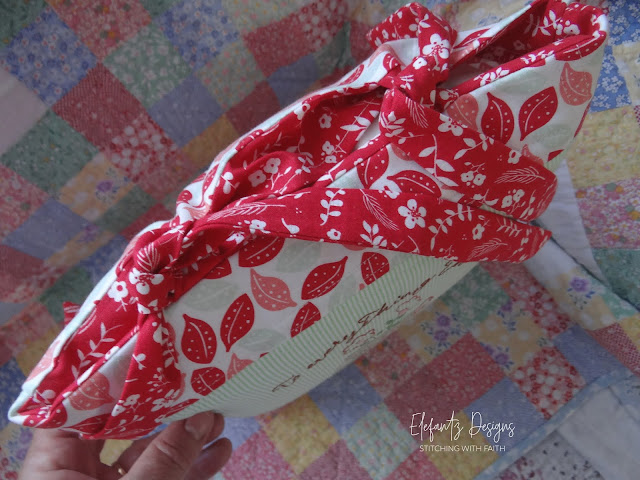 Here's one of my other tie-top pillows which sat on our bed through autumn and winter. I added three green/white spot ties because they contrasted beautifully with the rich red... 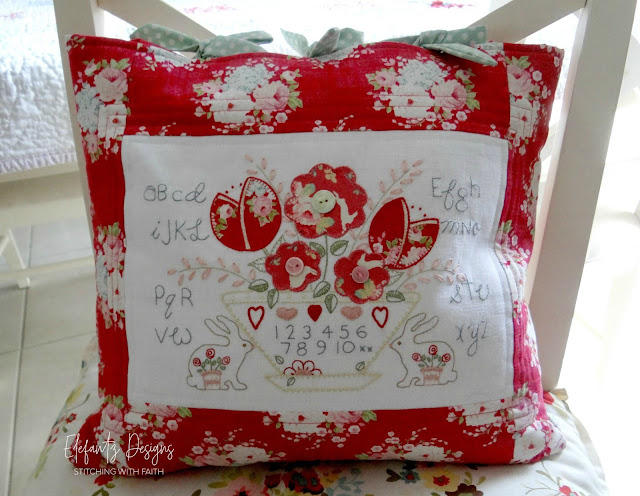 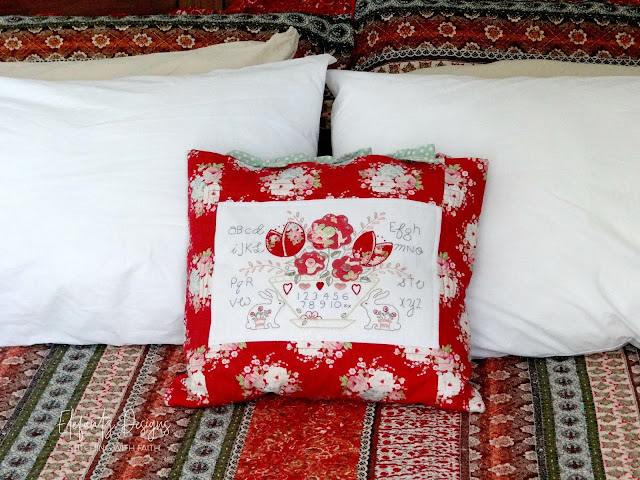 The pattern for the "Potted Sampler"stitchery used in this pillow is over HERE in my shop. I actually made that design twice because I wanted to show it in two different colourways (both are included in the pattern).

The deeper reds work well with our autumn/winter bedspread... 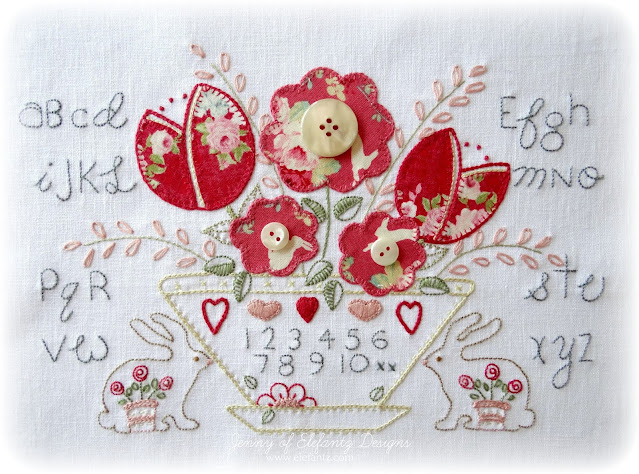 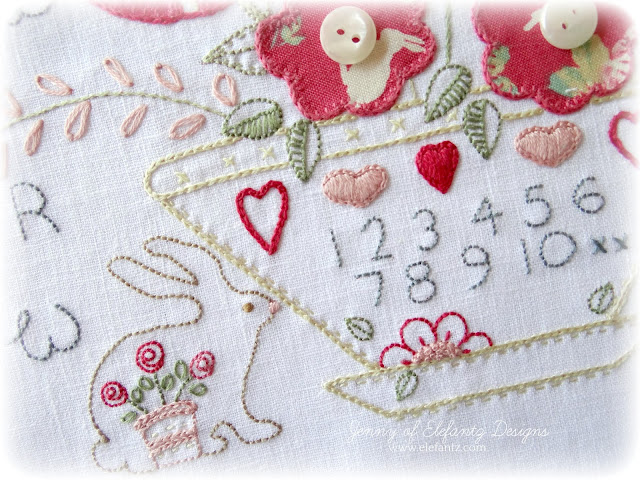 But the softer colours are very shabby chic and perfect for our spring/summer bed coverings.
Of course this means I'm late making a new pillow because I haven't even begun this one.
Adding it to my to-do list right now... 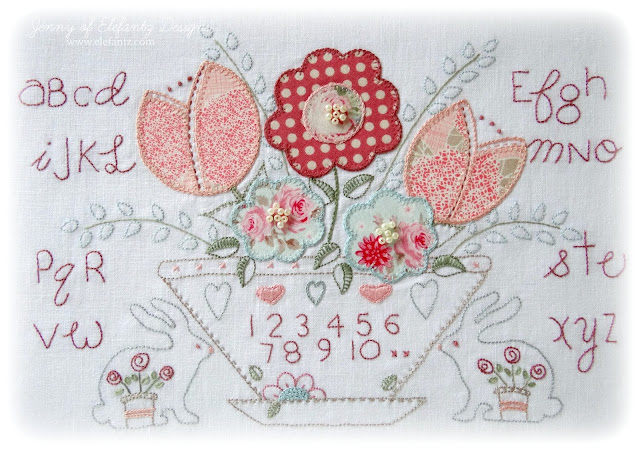 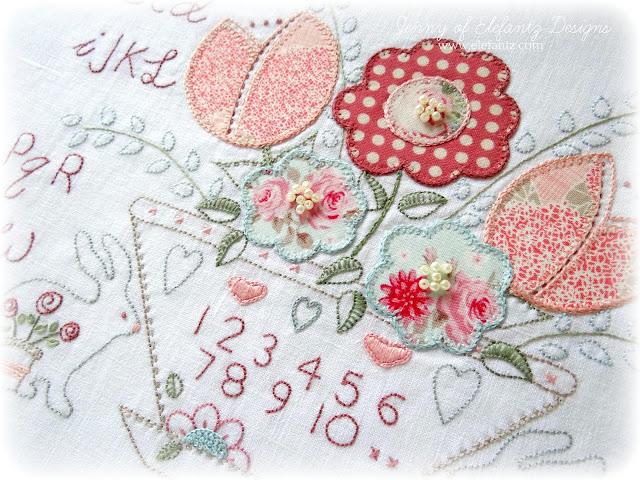 Just out of curiosity, which colour palette do you prefer for this design?
Well, I'd best be off and get dinner for my darling man as this tutorial was written up later in the day than I'd planned, but for a jolly good reason...I spent a few wonderful hours with Blossom and the girls this morning and rather than having her usual nap when the girls do, Bloss asked me to stay an extra hour just so we could chat without interruptions. What a blessed day I had.
She's still hanging on and though there are signs the baby is not far off making his appearance we all know that the more babies you have the more you 'feel' things sooner rather than later. If he hasn't arrived in a week Blossom will be induced so would you pray her little lad makes an appearance before then please? (thank you xx)
Shall you be making one or more of these pillows??
I have some wonderful garden pics to share with you next time...
Loving hugs

Hi Jenny,
This pillow so cool ! I was just passing by this afternoon and thought I'd drop in :) Thanks for this creative idea ! I was just looking for something like this.
hugs,
Joanne

I've filed away this page for possibly doing this some day. It's adorable. Thank you so much for the tutorial. Praying that Blossom soon has that sweet baby - hopefully uninduced.

Jenny I love the way you say it takes 30 minutes to make that pillow 😳 It would take me a lot longer I am sure. I like the colours in the top photos. I will be praying for your girl during these last days of her pregnancy.

Very pretty Jenny and an idea to remember. xx

Cute, cute, cute! What a great tutorial! As I was looking at your pictures I was thinking about actually tying those ties onto something... the back of a chair? The knob of a door? The top of a window treatment? You've got me to thinking. I think your stitcheries are lovely, and you've created a beautiful way of displaying them. Thanks for sharing!

Your tutorials are always so clear & simple to follow Jenny & I just love them. Your photos are always great & I think anyone who wasn't even a confident sewer, would feel they could have a go. I cannot choose which colour way I prefer in the bed cushion as I actually LoVe them both. I seem to be going through this impossible, indecisive stage ... something which use to drive me nuts when other folk did it !!!!!! xx

PRETTY FABRICS AND STITCHERIES, THANKS FOR THE GREAT TUTORIAL.

I inherited several cross stitched squares when my Mum passed and haven't known what to do with them, I know now! Thanks for the inspiration and the really clear tutorial :)