Every January, regular as clockwork, you'll find Mr E and myself with eyes glued to the television watching two weeks of the Australia Open Tennis tournament.
I can't remember how long this tradition of ours has been not-negotiable but I do remember Blossom as a 6 year old watching with us so it's been at least 16 years, but probably longer.

Our little house has the galley kitchen right beside the living room, and the television is only about 4 feet from where I cook, so I can watch the tennis and bake at the same time each afternoon - pretty good huh?!

Today I chose the One-Bowl Chocolate Cake recipe from the Women's Weekly Classic Cakes book I showed you the other day... 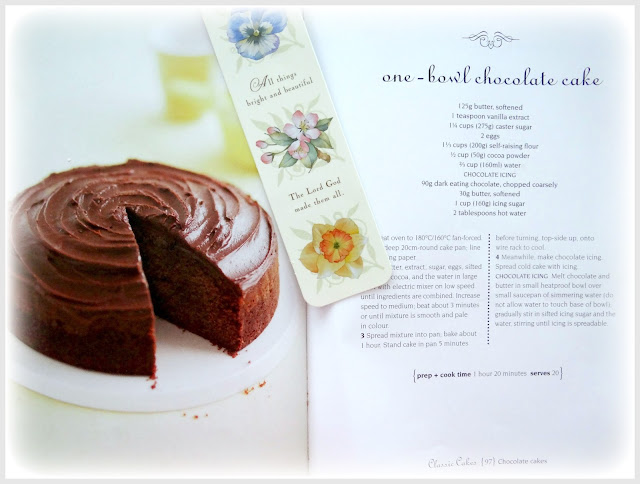 ...but rather than a round cake I baked mine in a loaf tin, then split it across the centre and filled it with jam, cream and strawberries before drizzling chocolate icing over the top.

Mr E was quite impressed when he came home from work, but he'll have to wait until after dinner for his taste-test...probably during the Federer/Zverev match. 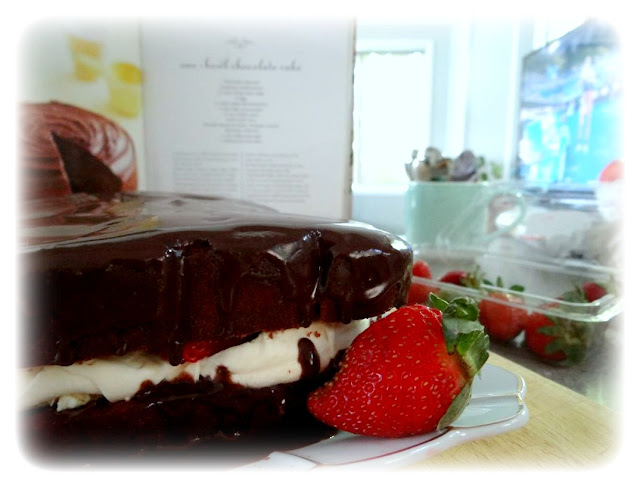 I'm hoping Rafael Nadal or Roger Federer win this year as it's been a while since they won a Grand Slam title in Australia, but I'm also enjoying the unseeded players coming through too! What about you?

Another thing I do when the tennis is on the telly is stitch.
Here's one of my new designs for February's Stitchery Club, one I've loved working on between games and sets and matches... 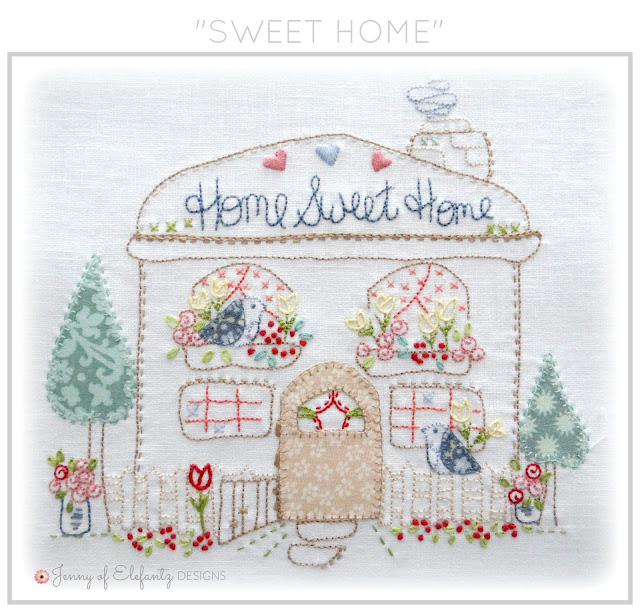 I always begin with the applique and then move on to the embroidery... 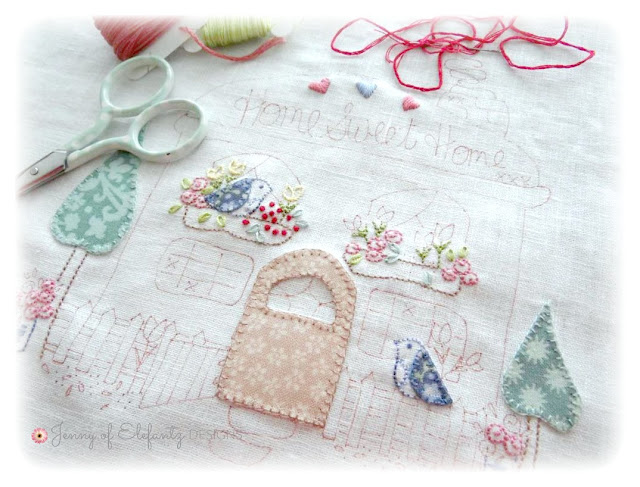 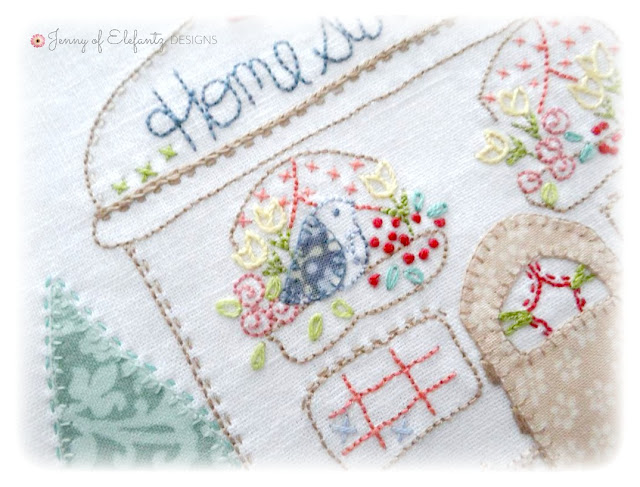 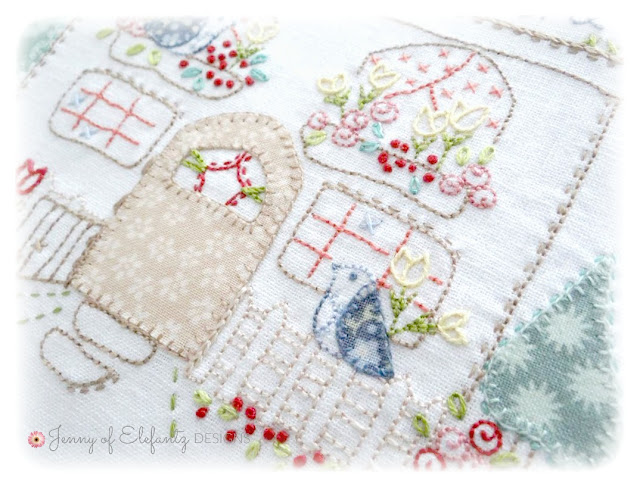 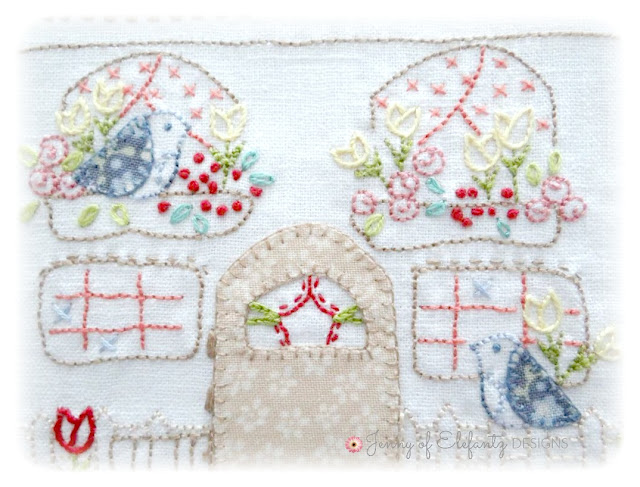 Stitching is like painting a picture, but with thread.
Little by little, choosing one colour after another until I have filled in the traced lines. The sense of satisfaction when I finally put my needle down is quite lovely.

And "Sweet Home" means a lot to me because home is a place I treasure, so this design will be framed and displayed in my home, wherever than be in life now and in the future. 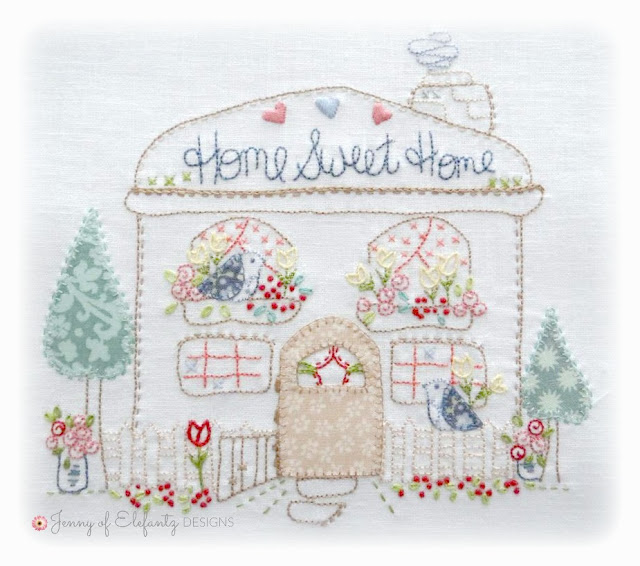 Have a lovely night,
hugs

That is so sweet Jenny and the cake look delicious.The tennis has been on in our home also. It has been rather hot here these last few days so my beloved has been spending quite a bit of time indoors.
Blessings Gail.

That cake looks delicious!! Love your 'Sweet Home' project. Yes, say it with fabric and embroidery is my saying too :)!

Now that my sewing room is re-organized, I can once again turn my attention to stitching! "Home Sweet Home" would look charming framed and in my tiny foyer.

I so much enjoy viewing your soft and gentle embroideries with their applique touches. Inspiration is coming for me to get started on one of my own, and return to a love of the past (i.e. embroidery). Meanwhile, oh please do cheer for our Canadian, Raonic! :)

The chocolate cake looks absolutely delicious! I'll bet it tasted even better. I really like that new pattern. You even put in door hinges! I'm so glad you are having these happy days.

I always think of tennis as a summer thing maybe you do too as it's your summer now. So no tennis for me at this time of year. I also like to watch it on grass so will have to wait for a few months.

Love that embroidery Jenny and that cake looks scrumptious. Truly if you pardon the pun!

Your cake looks very yummy, Jenny. That recipe is my regular go to one when I need a birthday cake for dinner! Your little house is so sweet. xx

I am not watching any tennis matches and I still do not accomplish what you do in a day. That cake you baked looks like it came from a very exclusive bakery. Lucky Mr. E to be married to you Jenny Dear. As for Home Sweet Home...I am enchanted with this lovely stitchery design and I am very excited to know it will be in the February Club package. Thank you dear.

Love that Sweet Home - how darling!!! Choc cake sounds good, I've been planning on making one, just haven't yet...I like your additions to it!