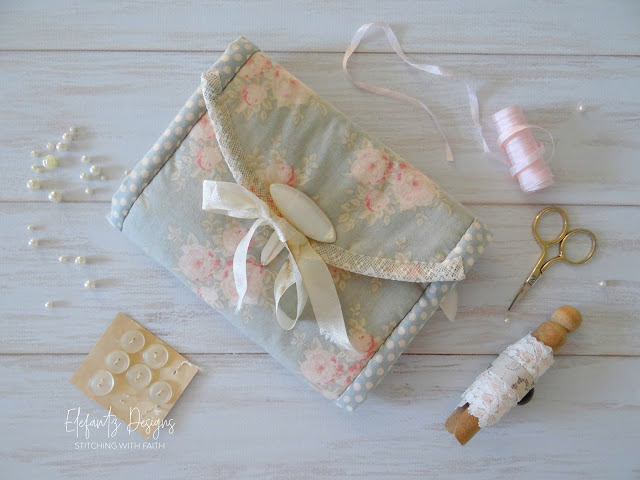 I think of all my tutorials over the years, and there's been about eighty since 2009, that the 5-day, very detailed Hussif tutorial is the most popular.

This five-part series of step by step tutorials ran over one week in 2015 and since then I have had hundreds of requests, especially this past year, to release the whole thing as a single pattern. Up until now I've only sold the embroideries featured in the Hussif, but earlier this week I brewed a large cup of Vanilla tea and sat down to do it. 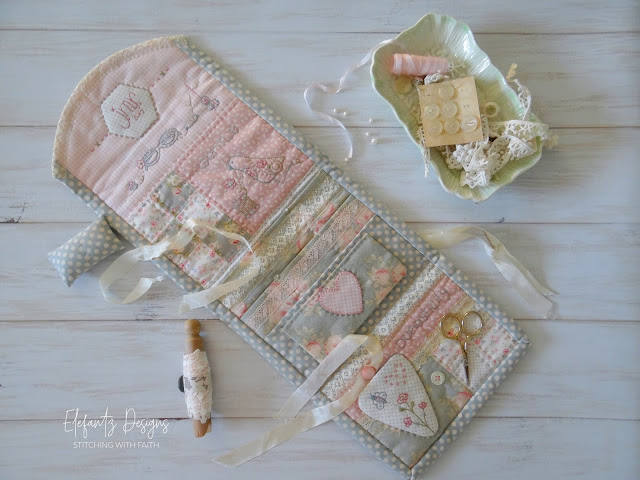 Well, let's just say there ended up being a few large cups of tea, a lunch of avocado on toast with a side of grapes, more tea and some delicious ginger slice to sweeten my mind...and after many hours the 59-page pattern was complete.

If you've not seen this Hussif before, let me show you inside... 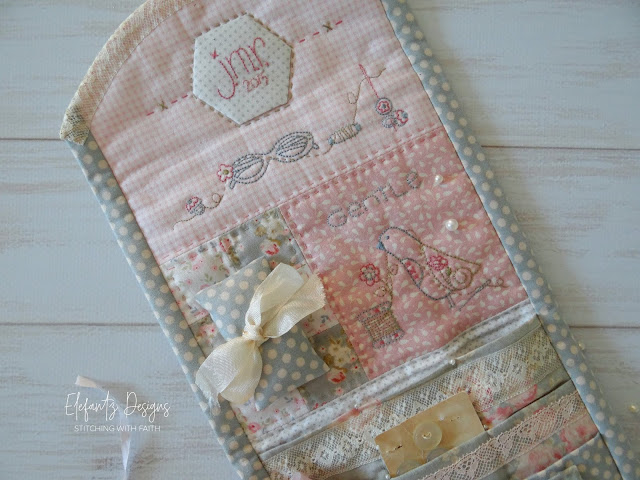 ...and perhaps tell you what a Hussif actually is?

Originally called a 'Housewife' (not the you or I kind of housewife)  it held various sewing notions. Today we know this as a sewing caddy or sewing companion - but in the Regency era of 1749 it was also known as a 'huswif' or 'hussive'. Eventually the name Hussif became the common term and is thought to have been a contraction of 'housewife' spoken in Lancaster shire dialect. 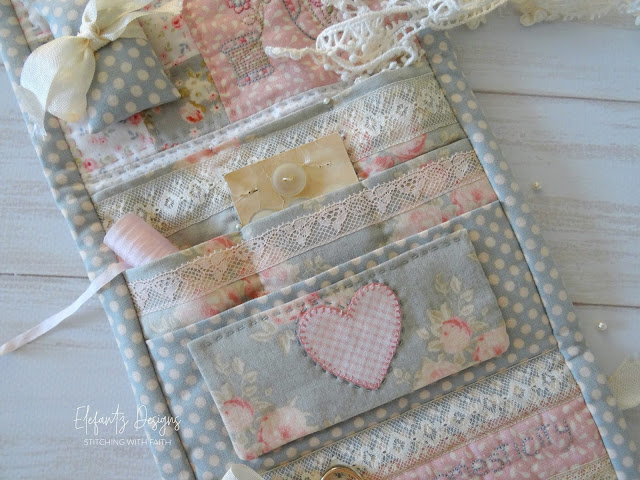 Every household and every sailor had their own Hussif. Some were simply made from scrap fabric or linen, others were quite ornate with brocade, lace, and embroidery.

Hussifs were usually 18-24 inches long with a rounded end and a square end, and folded into three sections, and that's how I made mine. 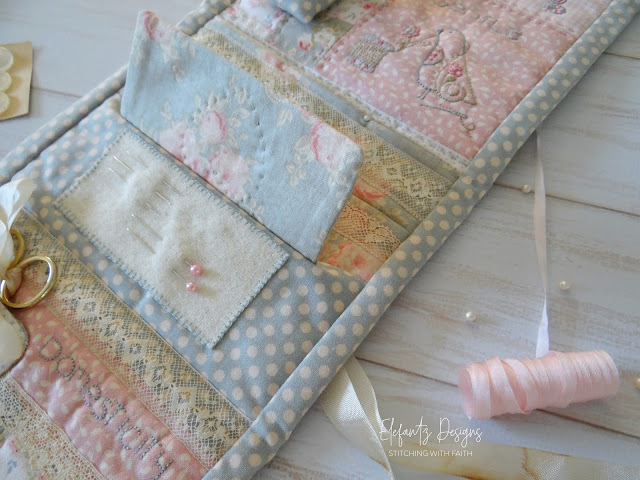 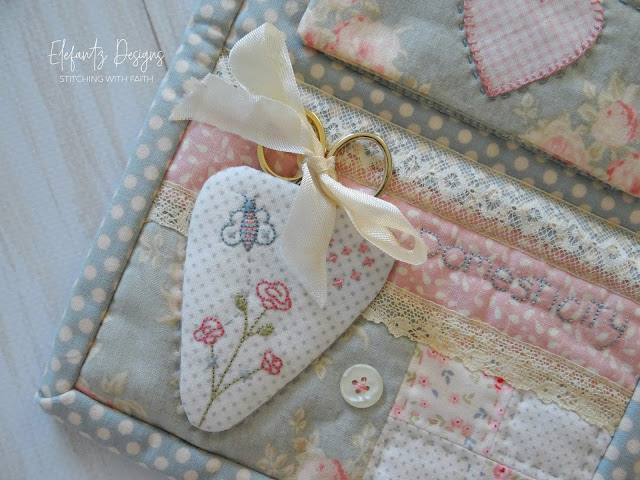 The lace I used is over 100 years old as I wanted my Hussif to become an heirloom piece to pass along to Blossom, and then to one of her girls. 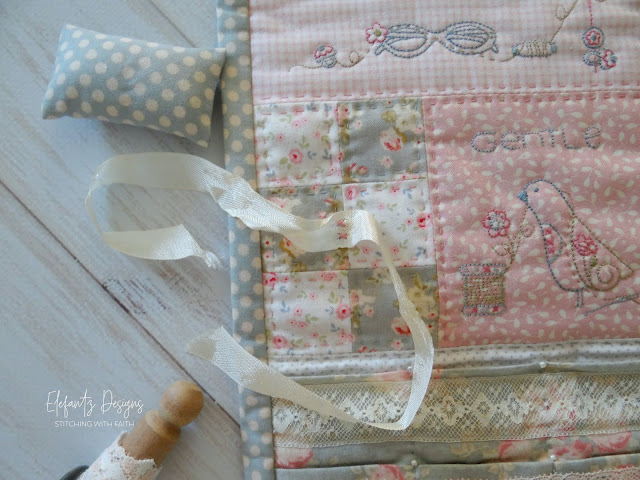 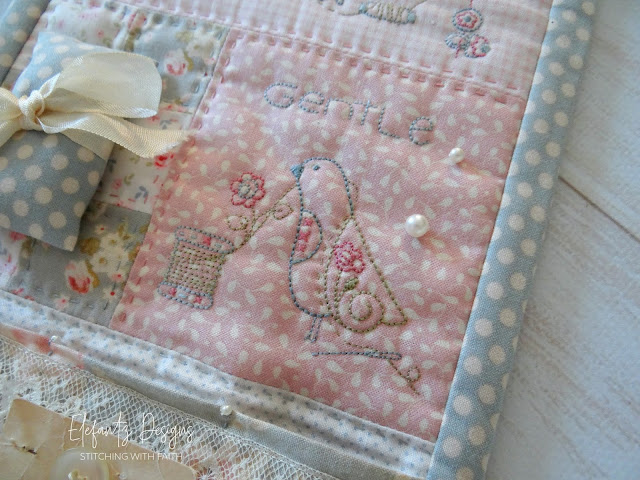 The newly compiled pattern comes with detailed instructions for every section, step by step photo tutorials, embroidery patterns and a second version of the Hussif made without embroideries. 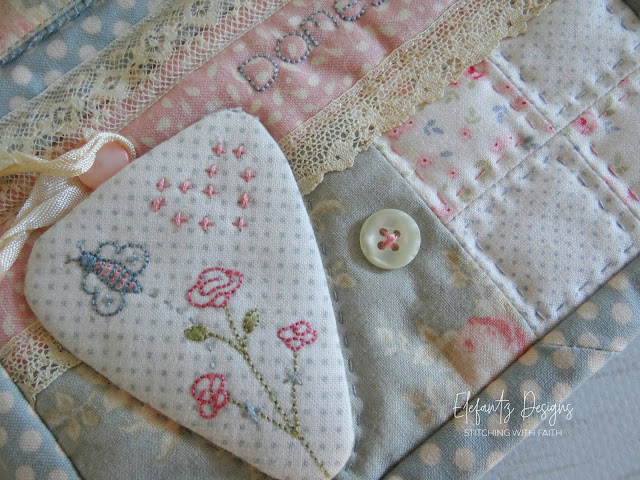 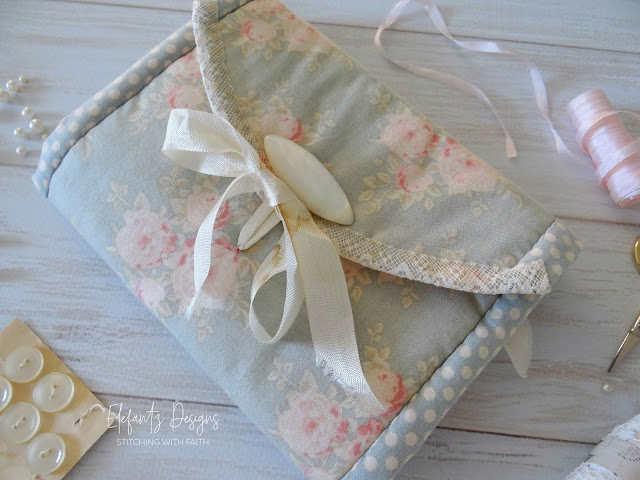 Here's the second version using a darker, more romantic style of fabrics. Certain sections were fussy cut, which means I carefully chose pretty sections of the fabric to feature where the embroideries did in my first version. 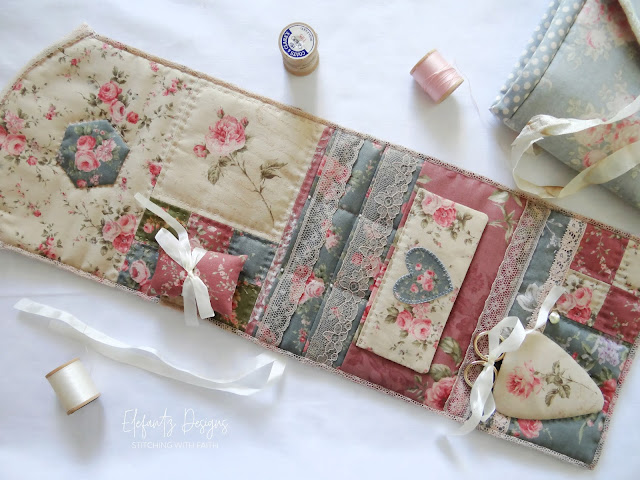 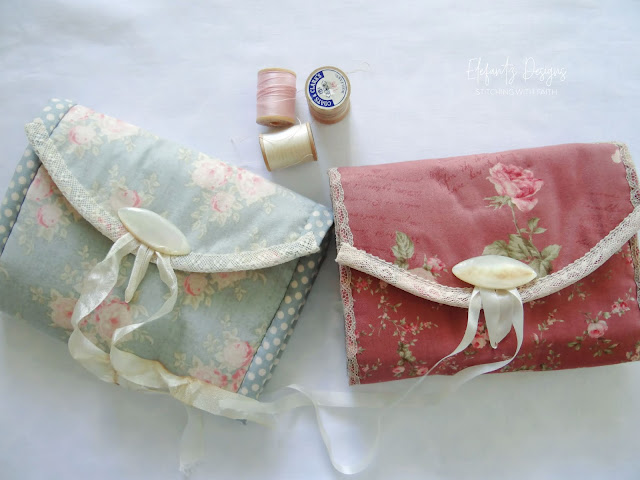 So now there's two options for making a Hussif of your own from my pattern.

Firstly, you can go HERE and start the 5-day tutorial by scrolling through the relevant blog posts from 2015. Please note that the embroideries are not included, and never were. They have always been a separate purchase.

Or you can go HERE to my Etsy Shop and purchase the complete pattern, everything included.

Last week I received a bundle of Tilda's new Gardenlife fabrics as a gift from the Australian supplier, 2 Green Zebras. They'll be available at quilt shops and online in May. 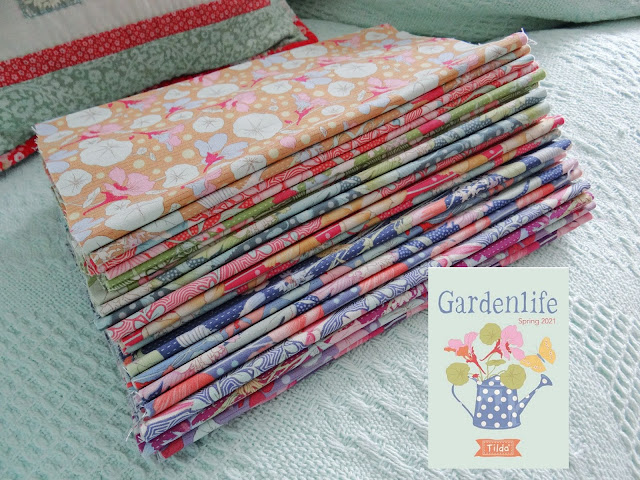 Now I'm working on an idea for a sew-along that you can join in with, shared here on the blog over a few weeks. Maybe a small Sampler quilt? Maybe something to tie in with Tea Week next month? There won't be any embroidery because I don't have time for that right now, but admittedly the thought of just patchwork or a bit of applique has set my heart a flutter.

I wonder what you'd like me to do as a sew-along? 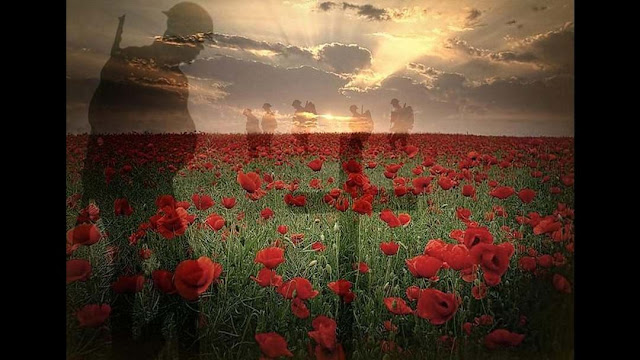 I shall sign off today with a grateful heart for our soldiers, serving and retired, who have carried the flag of our nation's armed services with courage and gallantry for well over a century. It's ANZAC Day today, a day when Australians and New Zealanders honour those who fought so bravely, yet unsuccessfully against the odds at Gallipoli in 1915.

Many of you will have lost loved ones in war, even in friendly fire. I'm praying for you today...

Posted by Jennifer Reynolds Jenny of Elefantz at 10:17 AM
Email ThisBlogThis!Share to TwitterShare to FacebookShare to Pinterest
Labels: Anzac Day, Hussif 2021, Hussif pattern, Making of a Hussif

Such a lovely design Jennifer. xx

Hi Jennifer,
A sew along, sampler quilt, Tea week, tutorials and a 59 page hussif ! A beautiful blog! The new Tilda Garden life ! Patchwork and applique ! I see being " semi retired" hasn't affected your creativity :) Thank you for all these lovely photos and ideas and projects to look forward to :)
hugs,
Joanne

This is the first I've heard of a hussif. Yours is so well done and detailed. I'm completely excited! It's not the season for me to tackle a new project but I'll keep this in mind as I sort through my craft supplies--it gives me the perfect use for some small lengths of lace that my husband's grandma made. Thanks!

For some reason I cannot get your post from April 23 (which I received in my email) to show on your website so I would like to comment on it here. About a woman's natural beauty. I can relate to this after over a year in lockdown. I've been wearing my hair short for years and years and had just gotten it cut before lockdown. So I have been growing it out for over a year now. It's to my shoulders and would appear longer if it was not curly. My adult daughters tell me it's the best thing that has come from lockdown. My graying, salt and pepper hair, massive curls (and a lot of frizz!) have amazed them. And I have to admit, I am enjoying the look too. And I wear no make-up. Never have. And still I think this volume of hair has made me feel more beautiful than I felt with very short hair. I used to struggle with this hair in high school, as I always wanted straight hair. I still have to go through a summer's heat and humidity, but it's long enough now to put up in a very curly ponytail, so I might be able to tolerate it :o) Thank you for reminding us that we really need to recognize our own natural beauty and stop trying to be otherwise.
Kathleen - kakingsbury at verizon dot net

That Hussif is beautiful and using 100 year old lace is over the top.
I love the story how the name came about.

Gallipoli - the name has always carried, in my mind, a feeling of sorrow and valiant devotion. No matter whether it's your country or mine, our military men and women are due great thanks for keeping the home fronts free. What an effort to make a 59-page pattern! You are amazing, Jenny. I've always liked both versions of the hussif, and one of these days, I'm going to make one. I think I haven't because I have two and don't actually NEED one, or have anyone to pass it along to. I love the idea of Blossom using it after you, and then whichever daughter follows in the footsteps of Nana, Miss Jennifer and Blossom. Won't that be fun? 4 generations of stitchers!

If I'm not too late, I think a wallhanging of tea service items would be cute and fun to do.

Thank you for honoring your military, who fought to retain freedom. Even more than a century later, their commitment gave honor to their families, their countries, their world. Long after their names are forgotten, they have still been a part in changing the future. On a different note, what about a miniature quilt (maybe a sampler of classic blocks) would be lovely. I have part of a fat eighth bundle of Tilda fabrics left from a miniature quilt project which is almost completed, and would happily use the rest in a small project.

I loved your hussif when you first showed it to us and still love it, Jennifer. One day I will get around to making one! Have fun with your new Tilda fabrics. I've been having a lot of fun using Woodland with the Tilda Lovers Club. Hugs, Christine xx

I love your design, you are soooo creative.